North Korea has tripled the amount of propaganda taught to pre-school children, forcing pupils to spend half their school day learning about Kim Jong Un under new orders handed down by his sister.

The new curriculum specifies that ‘Greatness Education’, which focuses on the upbringing of Kim Jong Un and his two predecessors, must take up half of the three hours preschoolers spend in class.

Previously, the children would only spend half an hour on the subject, but the leader’s sister, Kim Yo Jong, has reportedly tripled the requirement under new rules brought in late last month. 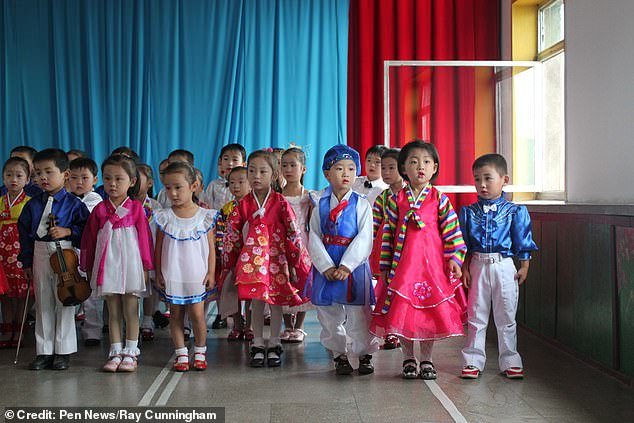 North Korea has tripled the dose of propaganda taught to children, so now leader-worship makes up half of the school day, under new orders handed down by Kim Jong Un’s sister. A North Korean school pictured above 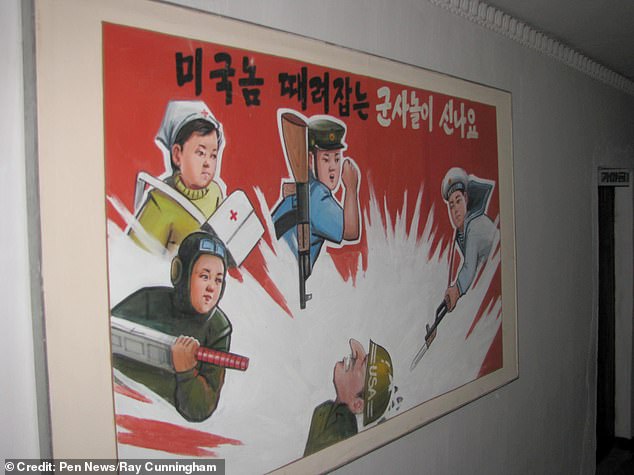 A source in North Hamgyong Province, close to the Chinese border, said parents and teachers were concerned that kids would now begin their next level of schooling at a disadvantage.

‘The kids are almost at the point of becoming elementary school students,’ the source told South Korea’s Daily NK newspaper.

‘So parents tend to ask teachers to focus on studying the alphabet. ‘The increase in time spent on the leaders, however, leaves less time for alphabet study, so parents will be unhappy.’

The source also revealed that schools had to shoulder the cost of ‘sprucing up’ classrooms so that the new curriculum could be taught in style. It’s fuelled speculation that already-stretched parents will be asked to chip in for renovations. 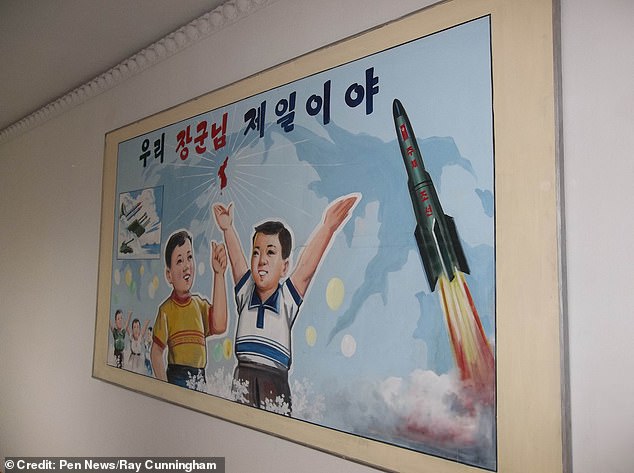 A source in North Hamgyong Province, close to the Chinese border, said parents and teachers were concerned that kids would now begin their next level of schooling at a disadvantage

‘Many parents are consequently wondering to themselves whether it might be better just to teach their kids at home,’ the source said.

Ray Cunningham, from Homer, Illinois, has visited several North Korean schools over the course of several trips there.

Photos from these visits show that tanks and warplanes are made out to be fun, while school murals glorify missiles and depict graphic violence against US troops.

In a previous interview, Mr Cunningham described how the worst of the brainwashing seemed to be saved for the youngest kids.

‘The younger school children are the ones that are given more of this indoctrination,’ he said.

‘They bring them in at age three to four and they really learn the litany.

‘There are lots of little stories that are told that are so apocryphal they’re crazy but you see them in every school that you go to.’

Under the new rules, the emphasis of classes is also said to have moved from the leader’s father, Kim Jong Il, and his grandfather, Kim Il Sung, to the leader himself.

‘What is being taught in Greatness Education has changed somewhat,’ said the source.

‘The amount of time spent on the Supreme Leader’s childhood is now twice that spent on his father’s and grandfather’s childhoods.’

In the lessons, the children apparently learn that Kim Jong-un was a bright child who ‘rode a yacht, did target practice, and liked to read’, as well as learning ‘revolutionary’ music.

Kim Yo Jong, who is often touted as a potential successor to her brother, was not schooled in North Korea herself, but was instead sent to a school in Switzerland, like the leader.

North Korean preschoolers typically attend from 9am to noon, and also have time set aside for physical education, play and studying the Korean alphabet.

But there’s little hope that schoolchildren can escape the cult of personality which surrounds the leaders.

Even portraits of the leaders are revered – to the degree that people can be punished for not taking proper care of them.

For example, reports emerged earlier this year that a North Korean mum faced the gulag after saving her children from a house fire instead of two paintings of the leaders.