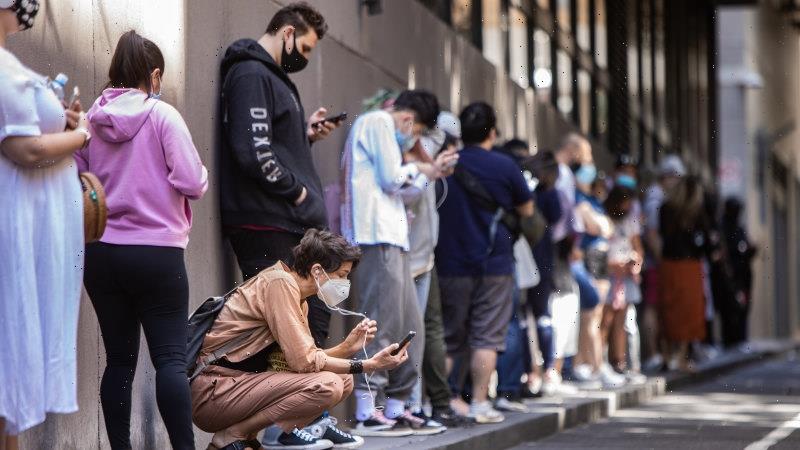 Lockdowns have been ruled out and the Boxing Day Test will go ahead as planned, but Victorian officials may bring in density caps on events such as the Australian Open to avert a worst-case Omicron wave in January projected to spawn hundreds of thousands of cases a day.

The state government’s lockdown decision came as Prime Minister Scott Morrison indicated that mass vaccination hubs will be key to getting booster shots to millions of Australians under a recalibration of the program in the face of the new and worrying variant of COVID-19. 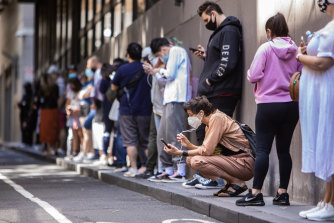 Mr Morrison said on Tuesday that Australia would not go back into lockdowns, but a recommendation from the country’s chief health officers for using masks in indoor settings was “very sensible”.

Fresh Doherty Institute modelling will be discussed at national cabinet on Wednesday after Victoria’s testing infrastructure was again stretched beyond its limits on Tuesday, with one health group tripling its workforce to deal with record demand as people seek pre-travel tests.

The Doherty Institute predictions show that without low-to-medium restrictions such as density limits, Australia is on track to reach about 200,000 cases a day by late January or early February, which would lift hospitalisation rates to 4000 a day.

The modelling found stronger public health measures and a three-month booster interval were needed to bring the epidemic under control.

“Looking at the impact of increasing uptake over time, a rapid booster program would likely enable control with minimal public health safety measures by end of March,” the modellers wrote on December 17.

The country’s chief health officers were spurred into the rare move of writing directly to the Prime Minister and premiers after receiving the modelling. They advised leaders to encourage mask-wearing in settings such as hospitality and entertainment venues, which both Mr Morrison and Victoria’s Acting Premier James Merlino lent weight to on Tuesday.

One senior Victorian health official, speaking anonymously to detail confidential considerations, said there was a distinct possibility that restrictions beyond mask-wearing would be required to slow the spread of Omicron in January.

Chief Health Officer Brett Sutton has not advised the Victorian cabinet that more restrictions are necessary. However, the senior official said curbs on high-risk indoor events such as closed-roof Rod Laver Arena matches would be a non-invasive measure that would barely impinge on people’s daily lives while yielding a public health benefit.

The official said the new Doherty modelling was troubling but warned the worst expectations were “highly unlikely” to eventuate.

This is because the projections were predicated on minimal mask-wearing and Omicron being as severe as Delta, which early data suggests it is not. It also did not factor in any behaviour change by Australians if cases rose in their communities. However, the source said that even at a far lower caseload, Omicron would put strain on hospital systems.

Another senior Andrews government source, also speaking anonymously, said the government had not yet pondered new rules beyond mask mandates in more settings. They said the government’s key objective over the next month will be to remobilise its vaccination workforce to administer hundreds of thousands of boosters a week from the first week of January to boost protection before the projected case peak later that month. 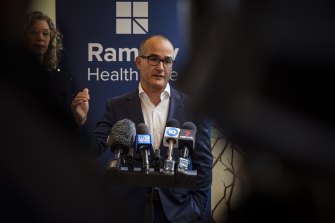 Mr Merlino said Professor Sutton and Chief Medical Officer Paul Kelly had provided advice for additional measures “particularly around masks”, but said he was not foreshadowing any changes to the Boxing Day Test or the tennis.

“The partnership with the Victorian community was get vaccinated, get to 80 per cent get to 90 per cent, and under the national plan there’s no lockdowns,” he said.

“No restrictions on getting together with loved ones with family and friends to celebrate Christmas, to celebrate new year, to enjoy summer. None of those things are changing.”

Some senior epidemiologists said the Doherty modelling was too pessimistic.

Professor Peter Collignon, an infectious diseases expert at the Australian National University, questioned if cases would soar to the level outlined, saying the shift into the summer months and high vaccination levels would help stem the spread.

“Cases will likely go up over the next month, slowly drop off and then really kick up next winter.

“What is more important is the hospital admissions, rather than the number of cases. Although we don’t know the severity of Omicron, for the unvaccinated the consequences are still significant.”

Professor Catherine Bennett, chair of epidemiology at Deakin University, said limits to testing capacity would mean it would be “impossible to know when we are getting even close to those numbers.” 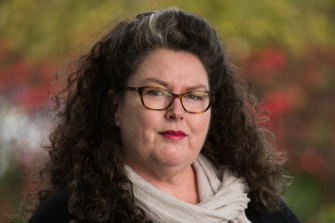 Professor Bennett said a critical factor when examining modelling is how much natural immunity from Omicron will dampen the spread in both vaccinated and unvaccinated people.

“We are all going to get coronavirus. What Omicron has done has sped that up.”

The Victorian government is preparing to remobilise its health workforce to begin administering hundreds of thousands of boosters from the first week of January.

Officials have begun communicating with health networks to redeploy thousands of nurses, agency staff and final year medical students to administer third doses. A Victorian government source said its key strategic objective was to administer as many third doses in January as possible to blunt the peak of Omicron cases.

The source, speaking anonymously to detail internal thinking, said the government believed it had the logistical capacity to begin ramping up the administration of boosters to Victorians with a shorter interval period. The source said the federal government was nervous about the ability of GPs and pharmacies to cope with demand over summer.

There are currently 3.2 million mRNA vaccine doses in state clinics, GP and pharmacy fridges around the country and that number is expected to rise to 4.8 million by Christmas. Another 13 million doses of both the Pfizer and Moderna vaccines are ready to go in Commonwealth warehouses.

But nearly 260 state and territory-run vaccination centres have closed in the past month as demand for doses trickled before the spread of Omicron began, dropping from 957 sites on November 11 to 699 this week. The number of Commonwealth sites has increased by 151 in the same period.

The original booster program focused on GPs and pharmacies as the main vaccinators, but Mr Morrison again urged state and territory leaders to reopen state vaccination clinics that had been shut.

“We want to get those booster rates up. It’s important we get those clinics open again,” he said.

Less than 50 per cent of those eligible have received a booster dose after the Australian Technical Advisory Group on Immunisation earlier this month recommended shortening the time between second and third doses to five months.

So far, just over 1.51 million boosters have been administered across the country and a further 1.64 million people are currently eligible. By the end of December, 4.1 million people will have become eligible for a third dose.

Victorians again faced hour-long delays and hundred-metre queues, while testing provider cohealth had its busiest ever day on Monday. The organisation tested 1759 people on Monday, compared with 900 at the start of the month and 500 in early November. The group opened 10 new testing tents and will open on Christmas day.

The Age counted 17 testing sites across Melbourne listed as over-capacity at some point on Tuesday.