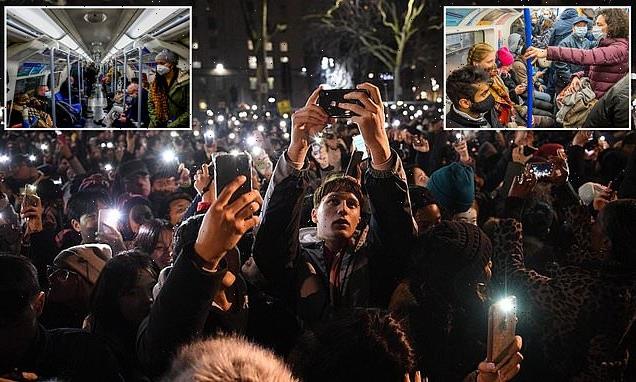 New Year’s Eve revellers will not get their festive free trip home on the Tube amid a financial crisis at Transport for London.

TfL said it would have to charge for late night trips between December 31 and January 1 because of the ‘catastrophic impact of the pandemic’.

Typically, since the year 2000, the London Underground has been free between 11.45pm and 4.30am on New Year’s, brought about by a sponsor who could cover the cost, but no sponsor could be found this year, the Evening Standard reports.

The Tube will still run through the night, but passengers will have to pay – making this the second year of no free travel.

It was revealed earlier this week that the Bakerloo line could be under threat of permanent closure as Sadiq Khan looks to plug a £1.9billion funding gap.

The Mayor of London suggested Underground services could be cut by 10 percent is a new cash injection is not brought about by the Government, and TfL finance chief Simon Kilonback said one line could be closed entirely.

Revellers look on by the London Eye during New Year’s celebrations in central London just after midnight on January 1, 2020

TfL has now said: ‘Following the catastrophic impact of the pandemic on TfL’s finances, TfL unfortunately will not be able to offer free travel on New Year’s Eve.

‘Services on the transport network will run through the night, ensuring that people can enjoy everything London has to offer and get home safely.’

TfL’s current Government bail-out deal is set to expire in nine days and the transport body is looking for £500m to keep services going until April, along with £1.2billion for 2022/23 and more than £1billion for upgrades and maintenance.

A Tube line might have to close and 100 bus routes could be scrapped if the money is not secured, Mr Khan has said.

The Bakerloo line, which still runs trains dating back to the 1970s, is said to be under threat.

Of the 11 lines on the London Underground, it ranks ninth in terms of how busy it is – although more than 110million journeys are still completed on it every year.

TfL also warns that many journeys over the festive period could be disrupted, including trips to and from Heathrow airport.

Christmas Day will see no London bus services or trains running anywhere on the London Overground or Underground – and services will finish earlier than they typically do on Christmas Eve.