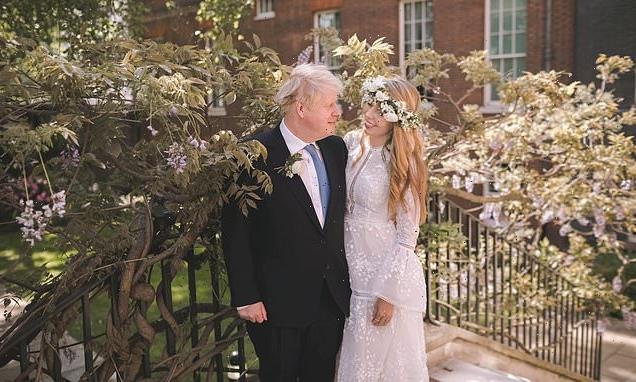 Boris Johnson gave some respite to couples waiting to get married today as he lifted the 30-guest limit on services and receptions.

From next Monday marriages will be allowed to go ahead with no fixed size limit despite the pause to lifting lockdown announced by the PM tonight.

Instead they will be allowed to be as large as is permissible at the venue under social distancing guidelines that remain in place.

It comes amid growing anger from the wedding industry that the limits remained in place while large crowds were allowed to gather for events like Euro 2020 football matches.

Wedding guests will have to remain seated at tables of no more than six, and in a blow to the celebratory nature of the day, the current ban on dancing indoors will remain in place over transmission fears.

The only exception will be the cuple’s first dance.

Venues will be responsible for carrying out risk assessments before weddings that set out how many guests are allowed.

Addressing the nation tonight, Mr Johnson said: ‘To give the NHS that extra time, we will hold off Step Four openings until July 19, except for weddings that can still go ahead with more than 30 guests provided social distancing remains in place, and the same will apply to wakes.’

The UK Weddings Taskforce, an industry group, had earlier estimated 50,000 nuptials planned in for the four weeks from June 21 could be cancelled if restrictions had remain in place.

They calculated the industry would lose £325million for every week that weddings without restrictions fail to go ahead. Mark Dawson, of the Wedding Venue Support Group, said the 30-capacity figure was based on a hunch from scientists last year and had not been backed up with any hard data since.

He said: ‘Eighty people can sit inside a pub, but if you put a bride and groom in there, you can only have 30 in there, it doesn’t make sense and there’s no scientific evidence to back it up.’

The Prime Minister tonight dramatically delayed Freedom Day by another four weeks to prevent up to 500 deaths a day after scientists warned the Indian variant could be 80 per cent more infectious. 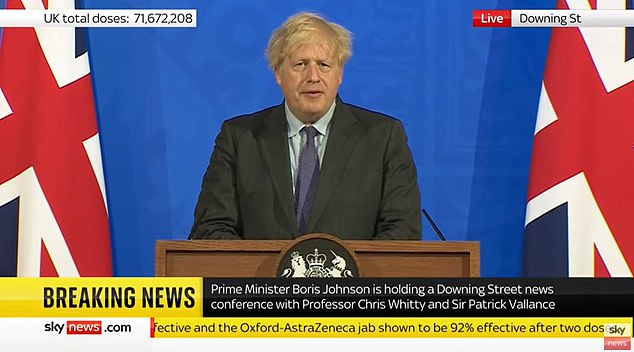 From next Monday marriages will be allowed to go ahead with no fixed size limit despite the pause to lifting lockdown announced by the PM tonight. 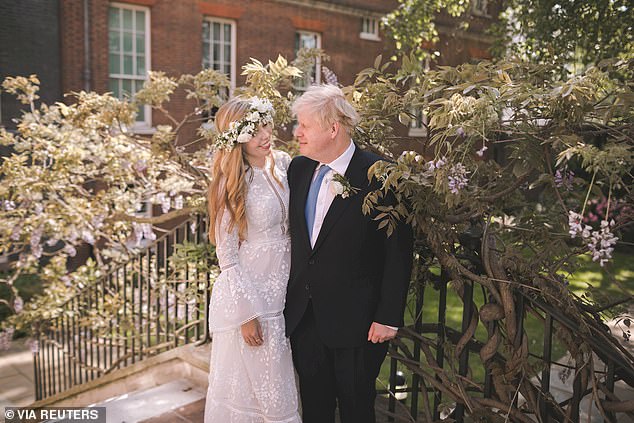 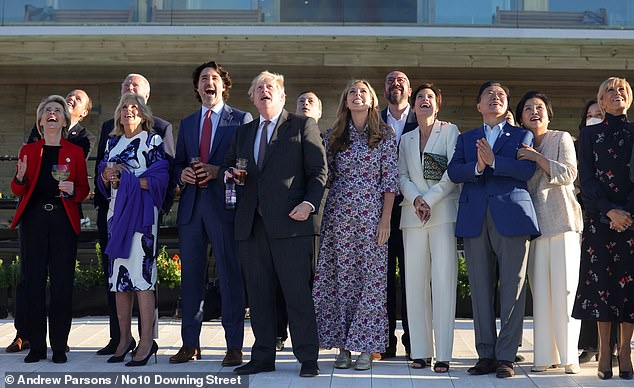 Mr Johnson was accused of hypocrisy after images showed world leaders gathered together on the sands of Carbis Bay in Cornwall.

Sarah Balfour, 45, from London, is meant to be getting married to partner Lloyd Michaels, 47, on July 11 – having already postponed their nuptials once in August last year.

She said she will postpone again if she can’t have the wedding she has planned, with 120 guests.

She admitted she’s ‘beginning to feel like Miss Havisham waiting in my wedding dress with cobwebs all over me’.

‘I’m supposed to have a dress fitting on Thursday, it was all looking so good, but now it’s all a big question mark!’ she told FEMAIL.

‘We’re meant to have 120 people. We thought moving it to July would for sure be enough time. 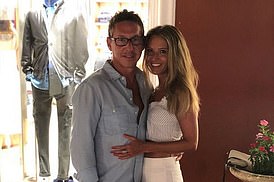 ‘If there’s restrictions like, only the couples can do the first dance and guests aren’t allowed to dance, or if they have to wear face masks, we’re just not going to do that, it’s not the way that we want our wedding to be.’

Sarah, who works as a wedding planner and whose business was devastated by the pandemic, said she’s not yet hit print on her invites.

‘Even our save the dates say ‘we hope to save the date’, it was worded in such a way that there’s no promises here,’ she explained.

‘Everybody understands, it’s no shock as such, but it’s obviously very frustrating from a planning perspective and I wouldn’t be comfortable if Boris says numbers can stay at 30, that’s not the way we want to do it. We’ve got big families and it defeats the purpose, because you want your wedding to feel comfortable, you don’t want people to feel uncomfortable.

‘Whilst people might not want to hug each other, that I understand, something like socially distanced table seating and guests wearing masks and not allowed to dance, it takes away from the wedding.

‘Music for me is huge, I’ve got a fantastic musicians performing at the wedding and I want people to feel free to party and dance, and if they can’t do that it’s not really what I’ve got in mind. It just becomes background music, which is not what we want.’

She said: ‘When Boris announced the road map, to be honest, I thought the sun was shining down on us that day. But the last four days, we have just been going through hell and back.

‘This is such a milestone event, we’ve been together seven years, and had been hoping and dreaming about this day and wanting to celebrate it with everyone.

‘We are one of three children, so with just immediate families and grandparents, we are up to 15 already. And then you have got to pick a literal handful of friends and you’ve already hit 30.’

She said 90 per cent of her guests have had at least one vaccine dose and they have encouraged all their guests to take regular Covid tests in the week leading up to the wedding.

‘We are willing to jump through any hoops to try and make it happen,’ she said.

This morning a senior minister had hinted that the changes were on the way.

Health Minister Edward Argar said couples waiting to wed were ‘very much’ in the mind of Boris Johnson.

He told Sky News: ‘There will be a lot of couples who planned, hoped, to do it, put a line through it, done it again and rescheduled again.

‘Not only does that cost money, but emotionally that is incredibly difficult for couples who want to have their special day and want to get married.

‘Again, I’m not going to pre-empt what the Prime Minister will say later, but I know that weddings and people in that particular situation will be very much in his mind at the moment, it’s one of the things he has been looking at.’

Mr Johnson also attracted anger from the wedding industry over a G7 beach barbecue at the weekend.

He was accused of hypocrisy after images showed world leaders gathered together on the sands of Carbis Bay in Cornwall.

No 10 denied the feast on Saturday breached current Covid rules – which allow 30 people to gather together outside.

Giving the bad news at a Downing Street briefing this evening, the PM defied fury from Tory MPs and the hospitality industry to insisted he cannot press ahead until more people are double-jabbed.

Government experts have told the premier that the Indian – or Delta strain – is far more transmissible than the Kent version, while single doses of vaccines are thought to be less effective in countering it.

Allowing the relaxation could put millions of people who have yet to have a jab at risk, as well as those who have only had one dose and elderly people who remain vulnerable.

The move means that current rules will essentially remain in place until July 19 – with social distancing in force in bars and restaurants, and the edict to work from home where possible staying.

At the same time the vaccine rollout will be intensified, with dosing intervals reduced to eight weeks. As a result around two thirds of adults could have been double-jabbed by July 19.

Government experts say hospitalisations should be slashed by between half and a third as a result, preventing ‘thousands’ of deaths. Modellers have indicated that otherwise hospital admissions could hit 2,000, with 250 or even 500 deaths a day possible.

In a sop to critics, Mr Johnson is offering a ‘break clause’ with another review of the situation in two weeks’ time – although officials warned that it is very unlikely to conclude restrictions can be eased quicker.

And the premier is adamant that there will be no further slippage from the new July 19 timetable. One aide said almost all the ‘benefit’ from additional jabs will have accrued by that date.

‘The PM is confident we won’t need any more than a four week delay,’ the aide said.

But Mr Johnson’s own MPs are livid at the move, with fears running high that this delay is only the first and lockdown might not be dropped at all.

He will face a Commons showdown with them on Wednesday, with the new regulations requiring a debate and a vote.

Although they are certain to go through with Labour support, the scale of the rebellion from Tory MPs will show the level of anger he is facing.

Vice chairman of the 1922 Committee of Conservative backbench MPs Sir Charles Walker said that ‘existing isn’t living’ as he raised concerns that restrictions will stay in place all summer.