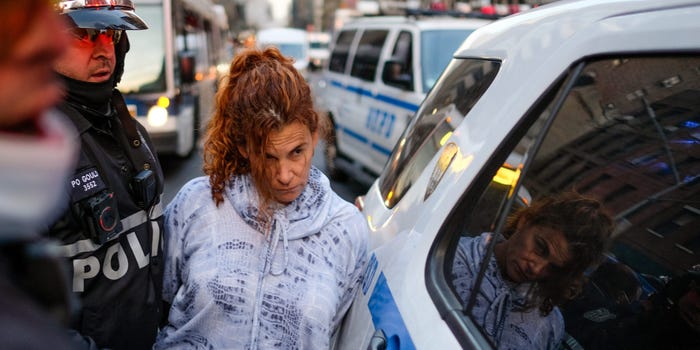 A 52-year-old woman has been accused of ramming her car into a group of pedestrians in New York City on Friday and is facing an endangerment charge in connection with the incident that left at least six people injured.

As Insider reported on Friday, a video posted on Twitter showed a woman getting taken into custody at the scene of the incident. A spokesperson for the New York City Police Department spokesperson identified the driver to Insider as 52-year-old Kathleen Casillo, who was behind the wheel of a 2019 Black BMW Sudan.

Casillo was arrested after officers responded to reports that a vehicle struck several people protesting in Manhattan's Murray Hill neighborhood. The demonstrators had gathered in support of Immigration and Customs Enforcement (ICE) detainees on hunger strike occurring at a jail in New Jersey.

Police told Insider she is currently facing a reckless endangerment charge in connection with the incident.

Additional footage of the incident posted on Twitter shows the car hit multiple people. According to police, shortly after the incident that six people were transported to local hospitals, but none appeared to have life-threatening injuries.

"One of the guys who was hit pushed me out of the way. I turned and watched as he went up into the air and flipped over," protester Desmond Marrero told New York Daily News. "It was traumatizing."