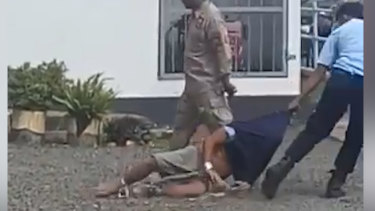 A prisoner is dragged across the gravel in a still from the video.Credit:Facebook

It was filmed as the men were boarding a ferry to the island prison of Nusakambangan – the same prison where Australian Bali Nine drug smugglers Myuran Sukumaran and Andrew Chan were executed four years ago. 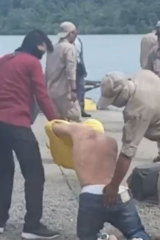 A masked guard picks up a shackled man.Credit:Facebook

The men appeared to be shackled so tightly so that they need to crouch-walk or crawl to the boat. On their bare backs, a number showed marks apparently indicating they had been beaten by belts or whips.

A large number of police officers were watching the prisoners, who were suspected of running a drug ring from inside the Bali prisons.

The Nusakambangan prison governor has been suspended over the incident and 13 prison officers are currently under investigation.

Junaedi, the director of inmate management at Indonesia's Ministry of Law and Human Rights, said the officers were being investigated to establish their individual level of involvement.

Nusakambangan became infamous in Australia when Mr Chan and Mr Sukumaran were executed there by firing squad in 2015. 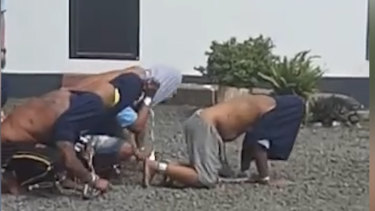 Men are shackled so tightly they can only crawl along the gravel.Credit:Facebook

Their transfer to the prison from Kerobokan was also controversial when the Denpasar police chief took selfies with them, with the photographs finding their way to Indonesian news sites.

Senior Commissioner Djoko Hari Utomo was photographed standing in the aisle of the Wings Air plane that was about to take Chan and Myuran Sukumaran on their last flight before execution.

The senior commissioner said at the time he was trying to raise the spirits of the Australians and had no idea the photo was being taken. 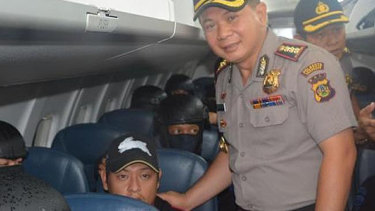