New strain of coronavirus ravaging London and south east is 54 per cent more infectious than other variant, PHE study finds

People with the new strain of coronavirus are 54 per cent more likely to infect others with the disease, it has been revealed.

The new variant is thought to be driving the surge of the virus in London and the south east and east England – though it is also prevalent in Cumbria.

Analysis from Public Health England revealed that the proportion of those who caught the new strain was 15.1 per cent, far higher than the 9.8 per cent of people who tested positive after coming into contact with someone infected by a different variant.

It suggests the new variant is 54 per cent more transmissible than the former.

However, in more positive news, the new variant does not appear likely to cause more severe symptoms or higher death rates. 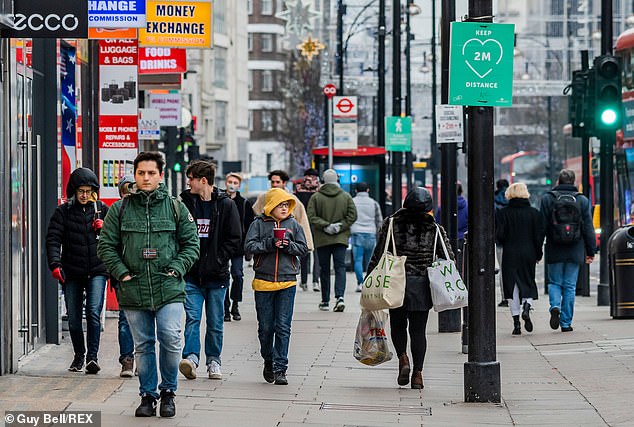 There is also no evidence that the variant is more able to infect children than others, despite seemingly higher rates in children and young adults.

The reason for this, it has been suggested, is because lockdown measures have cut down on contact between adults.

The data was published yesterday in a technical report on the variant, now named VOC (variant of concern) 202012/01.

Dr Susan Hopkins, senior medical adviser to PHE, said: ‘Our investigations continue into a new strain of Sars-Cov-2, predominantly in the south and east of England.

‘Preliminary evidence suggests that the new variant does not cause more severe disease or increased mortality but we are continuing our investigations to understand this better.

‘The best way to stop infection, whatever the variant, is to stick to the rules — wash our hands, wear a face covering and keep our distance from others.’

The report also found that the proportion of cases accounted for by the new variant had risen during December in all age groups.

Britain today recorded 53,135 more coronavirus cases in a record daily high and 414 deaths as the second wave of the disease continues to grow with a highly-infectious strain spreading rapidly across the country.

Today’s infection tally is the highest toll officially recorded by the Department of Health in a single 24-hour period and it marks a sharp 44 per cent rise on last Tuesday’s figure of 36,804. 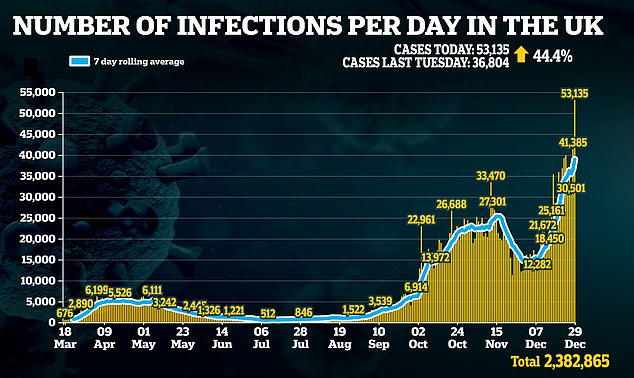 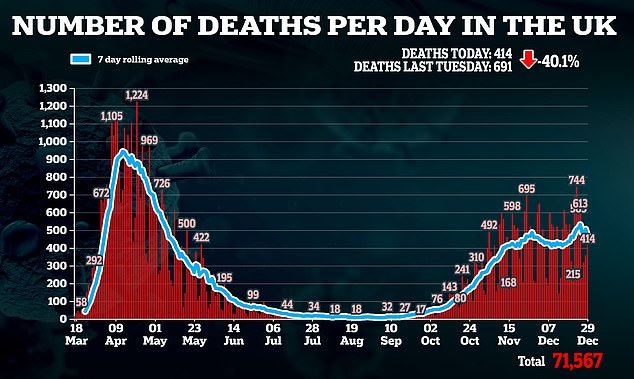 But officials can’t be sure if this is Britain’s worst day of the pandemic so far because a lack of testing in April masked the true scale of the peak of the first wave. Top scientists estimate up to 100,000 people were catching the disease every day during the darkest days in spring.

Public Health England bosses admitted ‘some’ cases announced today will be the result of a reporting delay over Christmas but warned the figure was mostly the ‘reflection of a real increase’. Data shows around 40,000 of today’s cases come from samples taken in England on or after Boxing Day.

Today’s 414 deaths are 40 per cent lower than the 691 recorded this time last week. However, it can take infected patients several weeks to fall ill, meaning the daily death tolls will inevitably spike in the next fortnight.

It comes as Boris Johnson prepares to convene a meeting of his Covid-O committee tonight to decide the Government’s latest tiers shake-up, amid warnings up to two thirds of England could be plunged into Tier Four this week.