Western Australia’s electricity grid recorded the lowest energy use ever on the weekend, beating the previous record by about 70 megawatts and prompting blackout concerns.

Speaking to Radio 6PR’s Gareth Parker on Monday, Energy Minister Bill Johnston said a record low of 1053 megawatts passed through the state’s grid on the weekend. According to the Australian Energy Market Operator, summer peak demand hits about 4000 megawatts while average demand hovers around 2000 megawatts. 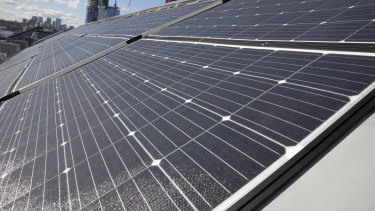 Solar panels are causing volatility in the WA grid.Credit:SMH

That low number is being driven by WA’s feverish uptake of rooftop solar over the past decade, which has reduced reliance on the state’s coal and gas-fired power stations.

About 29 per cent of WA households had rooftop solar installed and the AEMO expected it to reach 2612 megawatts of installed capacity by 2029-30, making it the single largest electricity generator on the system.

While the state government is still pushing for residential uptake of renewables, Mr Johnston said those numbers were actually problematic for the stability of WA’s grid.

“We have so much solar energy now we are getting very low demand in the middle of the day,” he said.

“There are highly technical reasons that you need a minimum amount of electricity to keep what we call the thermal generators – the coal and gas stations – running, and without those we have major problems with operating the system and you can have blackouts.”

The state government plans to combat this mismatch of generation and consumption by replacing the existing Renewable Energy Buyback Scheme with a new scheme that incentivises homeowners to pump power back into the grid at peak times and consume more during low points.

The Distributed Energy Buyback Scheme scraps the flat 7 cents per kilowatt-hour payment and replaces it with two separate payments that change depending on the time of day.

Under the DEBS, electricity exported between 3pm and 9pm will earn 10 cents a kilowatt-hour while outside of those hours they will receive 3 cents per kilowatt-hour. The scheme will also now include electricity sent to the grid from home batteries and electric vehicles.

Mr Johnston said the new scheme aimed to get homeowners to make changes to their power use so it better supported the whole grid.

“The problem with solar panels is we are getting literally more electricity than we can use during the middle of the day,” he said.

“What we are trying to say is use your power during the day when the solar is available and then help us by transferring your power into the evenings if you want to get that fed back into the system.”

Curtin University energy expert Hiroaki Suenaga said WA felt solar panel volatility greater than most states because it had a smaller customer base than the east coast markets.

He said home batteries would help stabilise the system, but it was likely the community battery model, already being trialled by energy generator Synergy, would provide a more financially viable option for houses unable to afford their own.