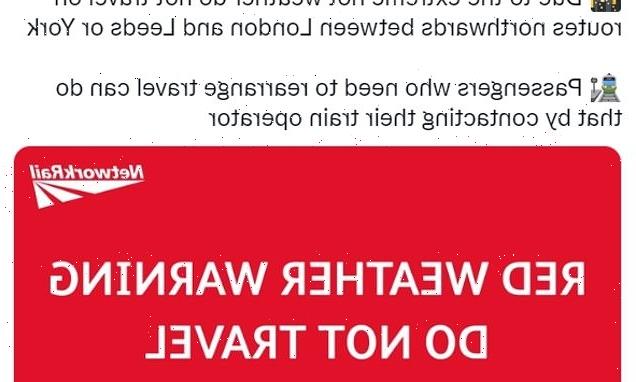 Record heat brings Britain’s travel network to a halt: Network Rail tells people ‘DO NOT TRAVEL’, hundreds of trains are cancelled and airports are set for chaos again after runways MELTED

Record breaking temperatures has brought Britain’s travel network to a halt, with Network Rail issuing a ‘do not travel’ warning, hundreds of trains cancelled, and delays at Luton Airport after its runway melted.

Transport Secretary Grant Shapps today admitted the UK’s infrastructure ‘could not cope’ with the extreme weather – as the country braced for potential highs of 43C (109F) this afternoon.

Network Rail advised no one to travel on services leaving north from London today after pictures emerged of rails that had buckled in the heat. The hottest railway track reached 62C (144F) yesterday, it said.

There will be no Thameslink or Great Northern trains running in any location north of London, from London Blackfriars via St Pancras, or from London King’s Cross or London Moorgate on Tuesday.

Merseyrail said the number of trains running and journey times will be ‘seriously affected’, with some routes closed completely. LNER will run no trains from south of York and south of Leeds to London King’s Cross.

Transport for London (TfL) said London’s rail network would also be running a reduced service today due to safety restrictions put into place to deal with the heat.

All trains out of Kings Cross were cancelled this morning, with foreign tourists bemused as to why temperatures that were ‘quite normal’ elsewhere during summer had resulted in such disruption.

Meanwhile, the RAC has warned motorists who may be driving to work that the number of vehicle breakdowns both Monday and Tuesday could be a fifth higher than usual. 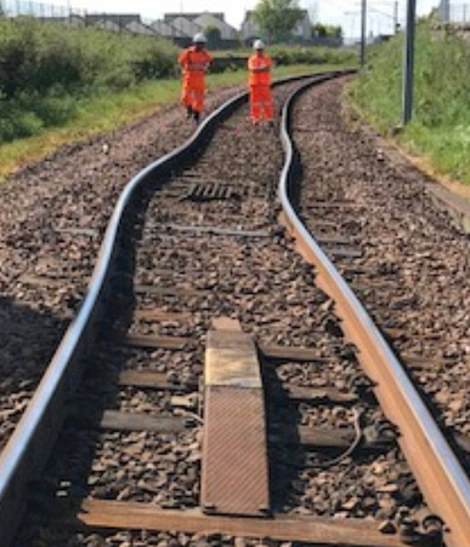 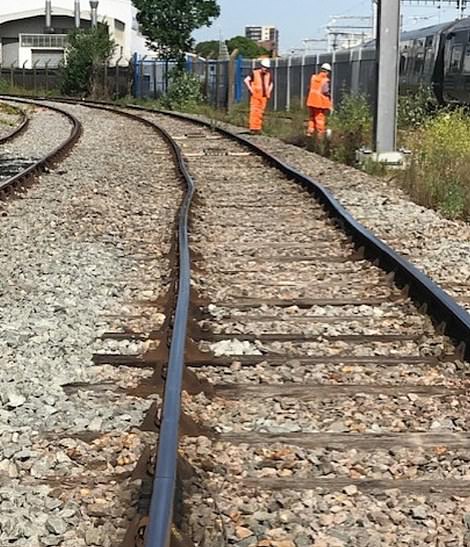 Today, Network Rail released images of rails that had become bendy in the extreme heat. One rail reached 62C (144F) yesterday, it said 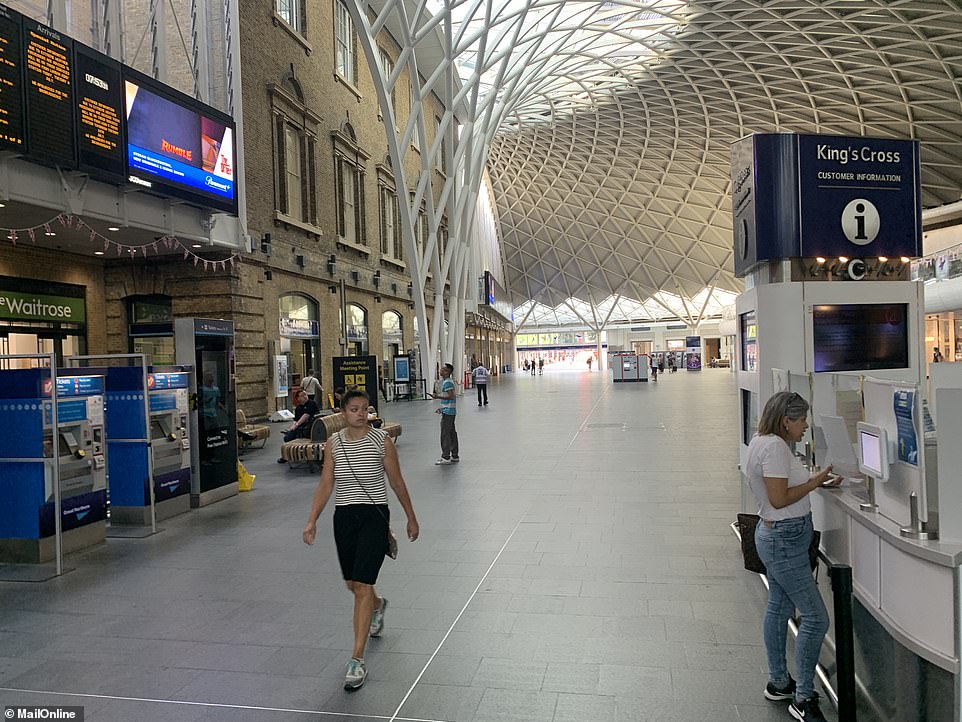 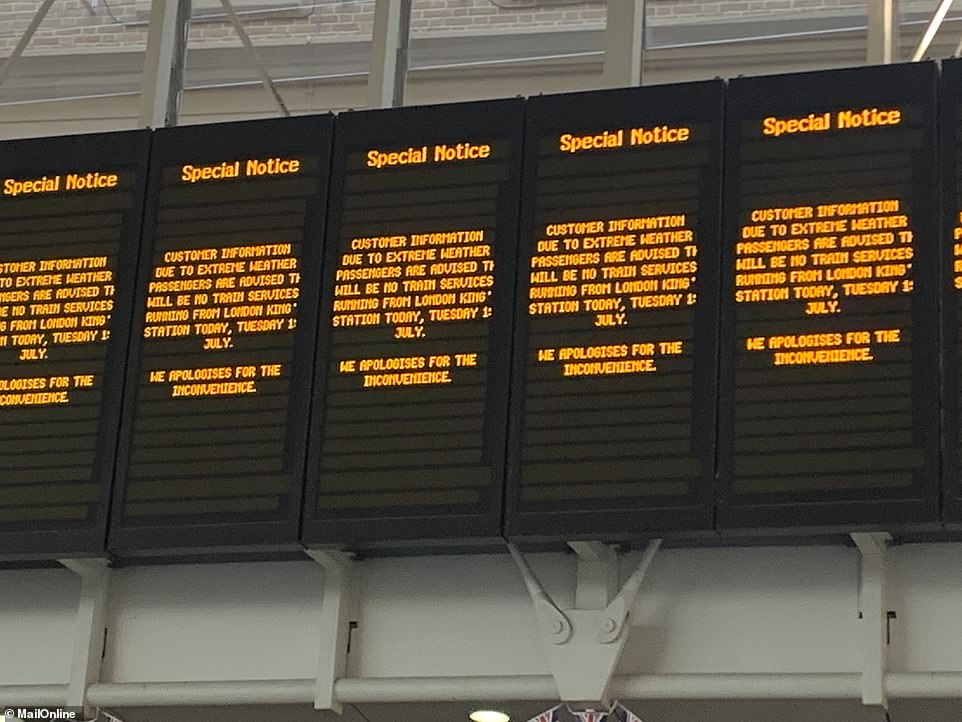 Boards at Kings Cross this morning, where were bemused as to why temperatures that were ‘quite normal’ elsewhere during summer had resulted in such disruption 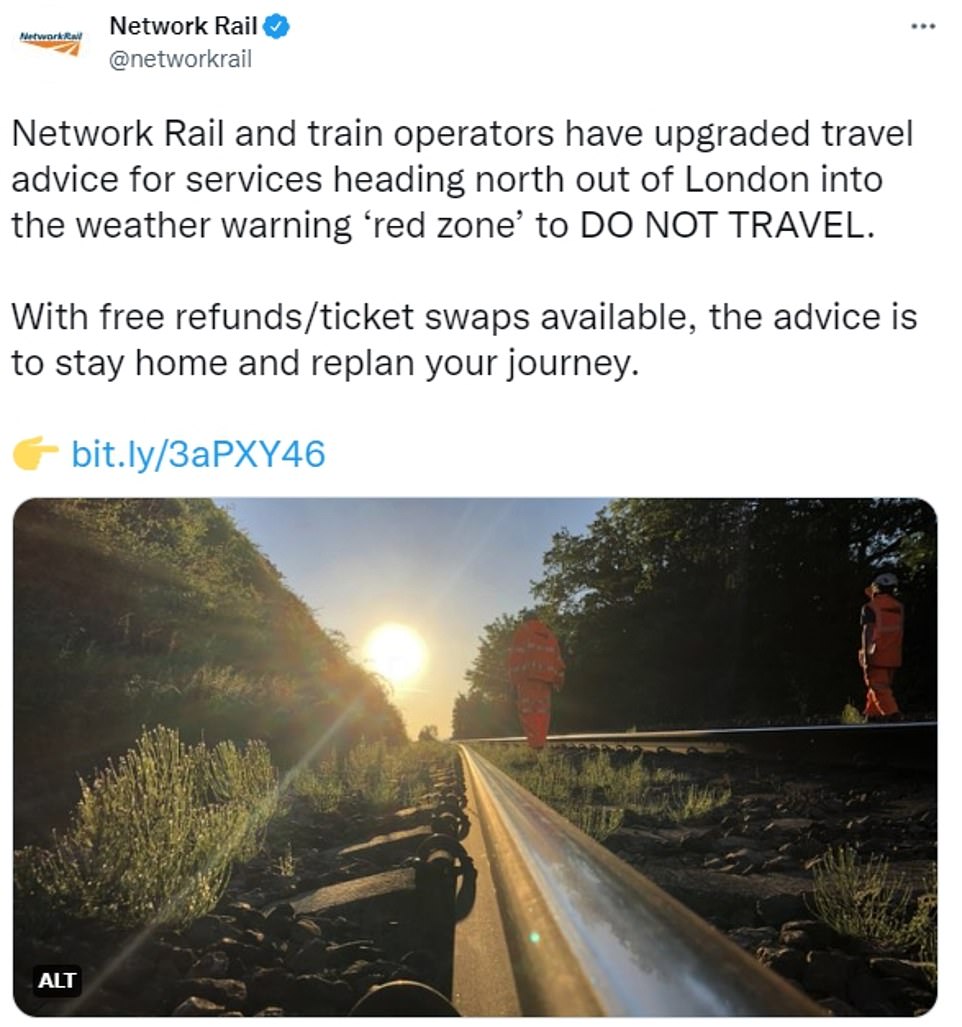 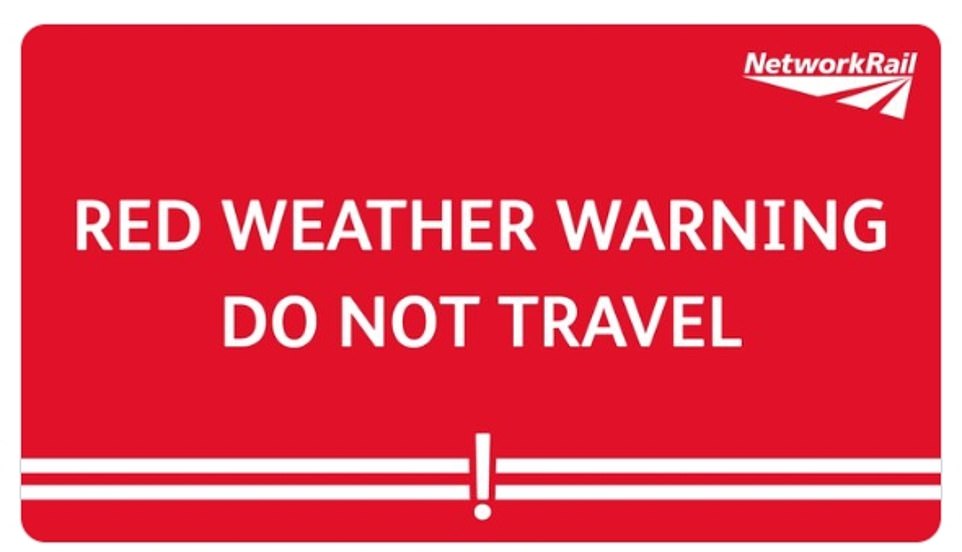 Network rail is responsible for maintaining the country’s railway infrastructure, which has been badly affected by the heat

Britons have experienced the ‘warmest night on record’ with London reaching 29C (84F) by midnight, while the mercury in Southampton hit 24C (75F).

Meanwhile, in Dover in Kent, the mercury stayed a few degrees cooler and reached 21C (70F) in the early hours of the morning while Aboyne in Aberdeenshire hit 19C (66F).

He told BBC Breakfast: ‘We’ve seen a considerable amount of travel disruption. We’re probably going to see the hottest day ever in the UK recorded today, and infrastructure, much of it built in Victorian times, just wasn’t built to withstand this type of temperature – and it will be many years before we can replace infrastructure with the kind of infrastructure that could, because the temperatures are so extreme.’

Asked if the transport system can cope with the weather, he said: ‘The simple answer at the moment is no.

‘Where those tracks are 40 degrees in the air, on the ground that could be 50, 60, 70 and more, so you get a severe danger of tracks buckling. What we can’t have is trains running over those and a terrible derailing.

‘We’ve got to be very cautious and conscious of that, which is why there’s reduced speeds on large parts of the network.’

Council gritters have been put on standby to spread light dustings of sand on melting roads.

Transport Secretary Grant Shapps said issues on the rails and roads will continue for decades during extreme heatwaves.

Asked how long it will take to upgrade existing rail infrastructure to be more resilient, he told Sky News: ‘Decades, actually, to replace it all. Ditto with Tarmac on the roads.

‘There’s a long process of replacing it and upgrading it to withstand temperatures, either very hot or sometimes much colder than we’ve been used to, and these are the impacts of global warming.’

He said there was no Cobra meeting planned for today, with the Prime Minister instead chairing Cabinet.

Kings Cross resembled a rush hour ghost town today as all trains were cancelled with rocketing temperatures causing havoc to the rail network.

All services between London and York were called off as the 40c temperatures hit with rail bosses concerned that tracks would not handle the heat.

The only busy spot was the fictional ‘Platform 9 3/4’ from the Harry Potter films.

At the head of the queue were New Yorkers Stacey and Steven Koppell and their nine-month-old daughter Hannah.

The couple said they we are flabbergasted that Britain could come to a standstill among what they described as “very normal to us‘ temperatures.

They endured a nightmare train journey yesterday which led to them forking out £215 for a taxi. 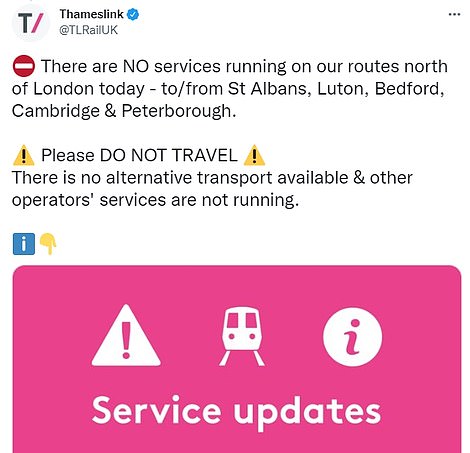 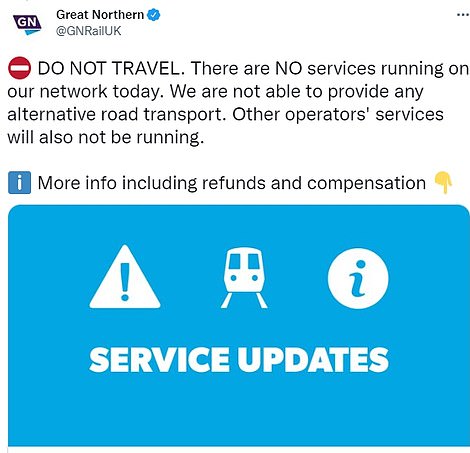 Northern said many routes had ‘completely shut down’, while Chiltern Railways also had a ‘do not travel’ notice in place

LNER said no trains would be running between Kings Cross and south of York and Leeds, while the Gatwick Express has been suspended

Mr Koppell, a Manhattan lawyer, said: ‘We are going to the Cotswolds for the day by train and the return journey stopped at Oxford and they said they couldn’t take us any further.

‘Our hotel is in Paddington and we’ve got a young baby daughter and we have no alternative but to spend £215 on a taxi.

Mrs Koppell, a New York teacher, added: ‘This these summer temperatures are quite normal to us.

‘We were expecting a couple of days of rain before we move onto France and I think these temperatures have caught the country by surprise.

‘It’s just haven’t been prepared. We’ve heard about Trainline spending in the heat on the tarmac at airports Milton. It isn’t really anybody’s fault. But we are bemused by it all.‘

Another American, Maria Schroeder, and two friends were left frustrated after their train to Edinburgh was cancelled.

Maria, 23, a teacher from Ohio, said: ‘We got here at 4:45 am for our train which was supposed to leave an hour later only to find it cancelled.

‘My friends Ellie and Kyle and I were only fitting in Edinburgh for 24 hours to see that beautiful city.

‘We’re only here for a short vacation so we’ll have to cancel it now and we’ve also lost our Airbnb which we booked in Scotland.

‘We’ve had to find alternative accommodation for tonight in Camden Town, and we can’t book in till 2 pm. So we are stuck here with our luggage.

‘I am just bemused at how England has come to a standstill. The heat index back home was in the 90s and yet everything works as normal.‘

Rachel Ayers, a Met Office forecaster, said: ‘There are likely to be delays on roads, with road closures, as well as possible delays and cancellations to trains and maybe issues with air travel.

‘This could pose a significant health risk to those stuck on services or roads during the heat.’ 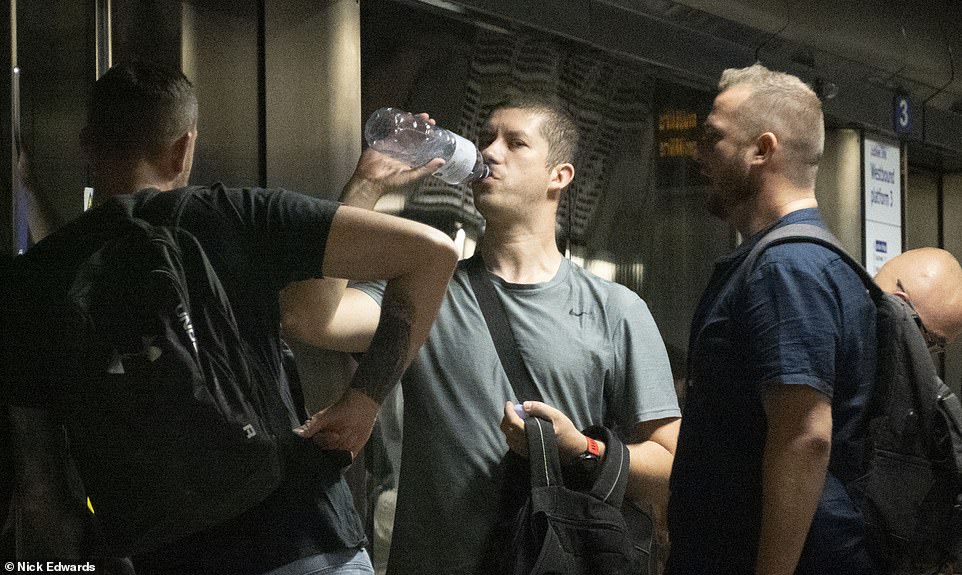 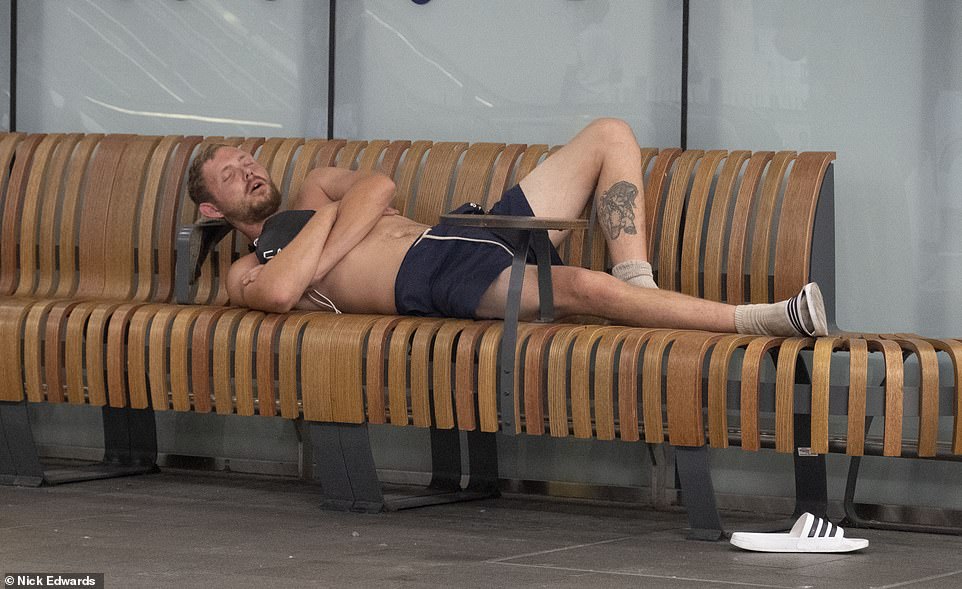 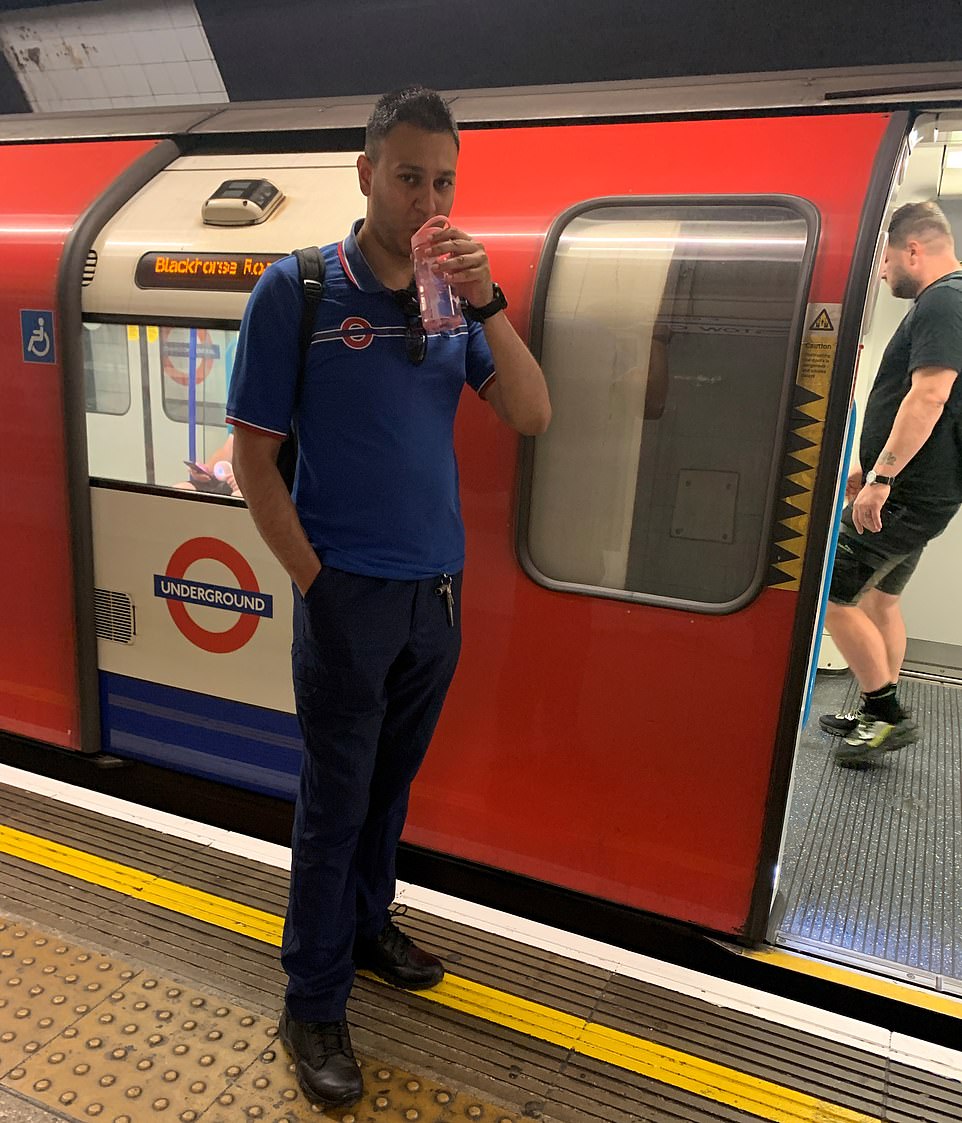 A Tube driver sipping from a bottle of water at Kings Cross, where all overground trains were cancelled this morning due to the heat 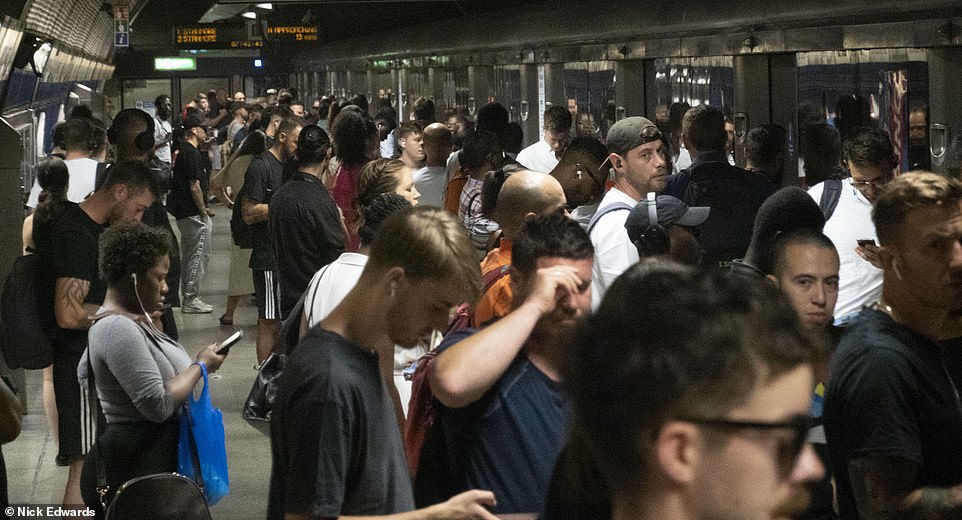 People are being warned to stay at home instead of travelling. Pictured: Queues to board trains on the Jubilee Line today 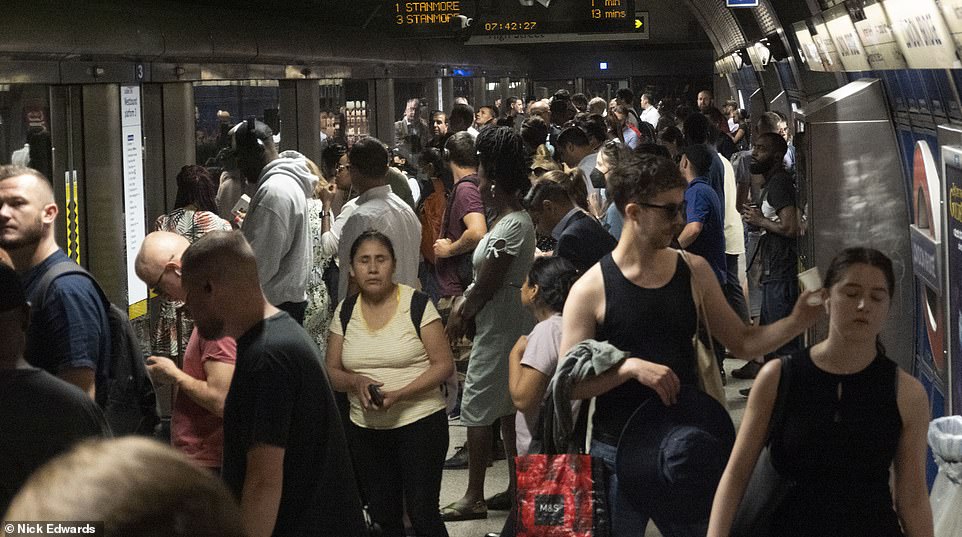 Transport for London (TfL) said London’s rail network would also be running a reduced service today due to safety restrictions put into place to deal with the heat. Pictured: Commuters on the Jubilee Line