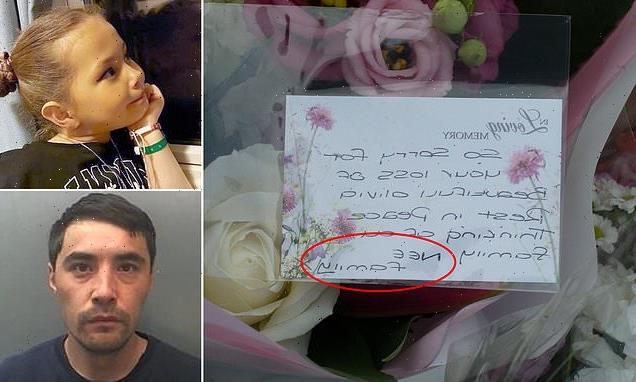 ‘Nee family’ leave RIP note for little Olivia: Well-wishers leave flowers for nine-year-old girl who was shot dead in her own home – after arrest of the ‘intended target’, convicted burglar Joseph Nee

Wellwishers calling themselves ‘the Nee family’ have left a note near the house where nine-year-old Olivia Pratt-Korbel was shot dead, it emerged today – days after the ‘intended target’ Joseph Nee was arrested.

Olivia was fatally shot when a gunman chased the convicted burglar into her family home in Dovecot before opening fire in an atrocity that also injured her mother, Cheryl, 46.

The note attached to flowers read, ‘So sorry for your loss of beautiful Olivia. Rest in peace, thinking of all [the family].’ It is not known if the ‘Nee family’ refers to Joseph Nee’s relatives. 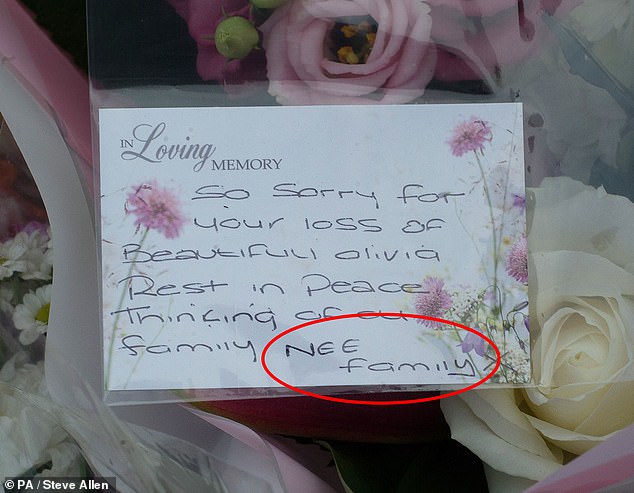 The note attached to flowers read, ‘So sorry for your loss of beautiful Olivia. Rest in peace, thinking of all [the family].’ It is not known if the ‘Nee family’ refers to Joseph Nee’s relatives 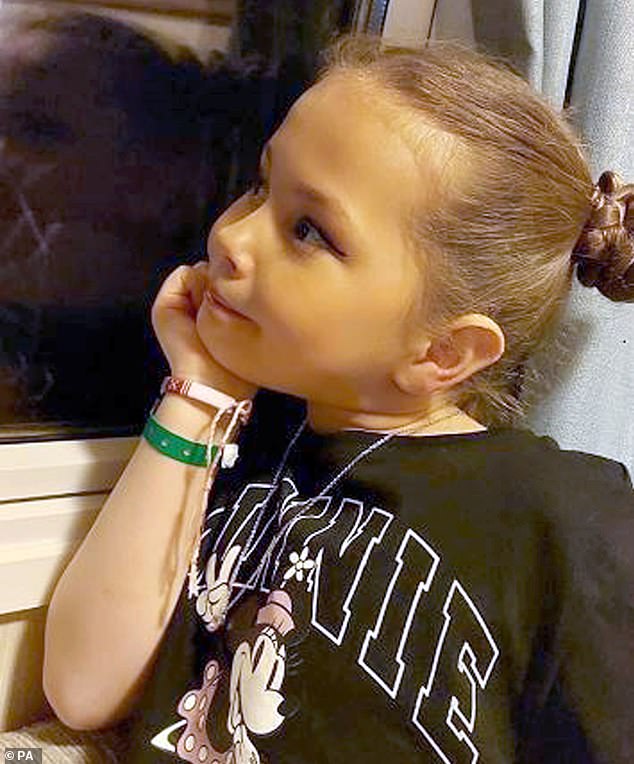 Olivia Pratt-Korbel, nine, was gunned down inside her family home after a balaclava-clad gunman burst in at night while chasing Nee 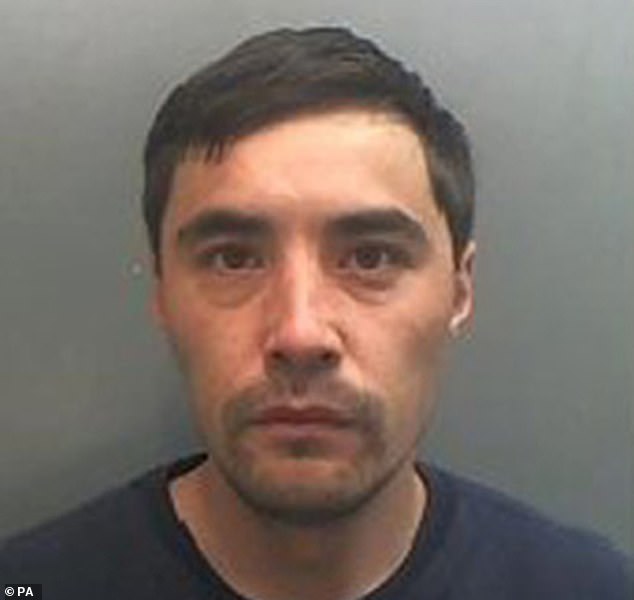 It comes as Merseyside Police launched a new appeal to find the gunman – warning anyone withholding information that they were protecting killers.

It is almost a week since Olivia was fatally shot when a gunman chased Nee into her family home in Dovecot, also injuring Olivia’s mother, Cheryl, 46.

In a short but dramatic video appeal on Twitter, Merseyside Police warned that anyone withholding information must give it up.

During the video, a voiceover states: ‘We’ve got parents who’ve lost their children.

‘If you’ve got information and you’re withholding it, you’re protecting the killers. We need your information. Provide that information to us and we’ll do the rest.’

As well as images of Olivia and flowers at the scene of the shooting, the video also featured images of Ashley Dale and Sam Rimmer.

The 28-year-old, who worked in the environmental health team at Knowsley Council, was found fatally wounded in the back garden of a house. It is believed she was not the intended victim. 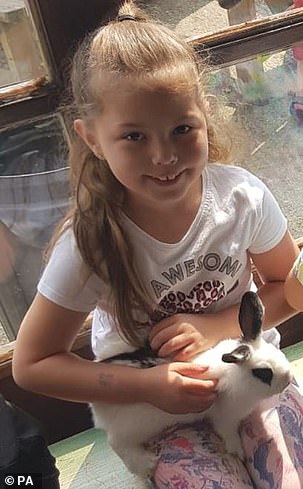 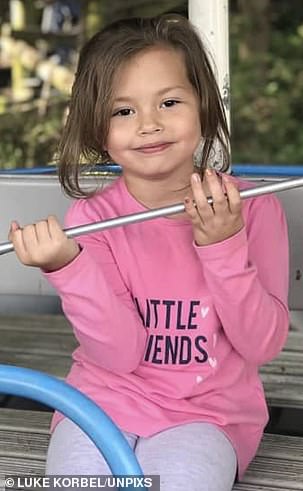 Olivia’s family said she was a ‘unique, chatty, nosey girl’ who ‘loved life and all it had to offer’ 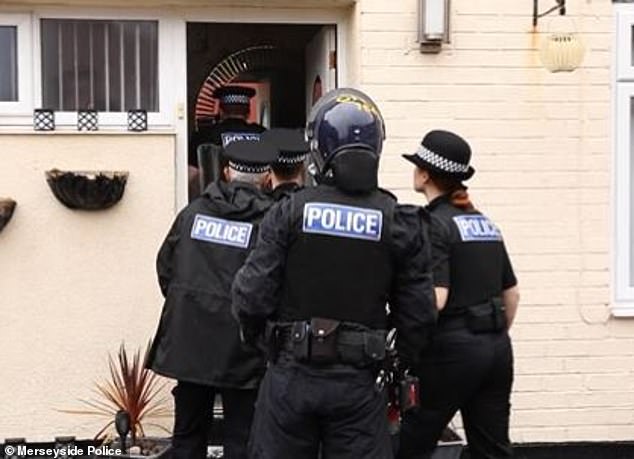 Police officers storming a house as part of the hunt for Olivia’s killer. Yesterday the force appealed for help, saying ‘silence is not an option’

Mr Rimmer, 22, was shot in Dingle, Liverpool, on Tuesday August 16.

Police said there will be ‘plenty of officers on patrol’ in all three areas that have seen fatal shootings lately.

The force tweeted: ‘They’re there to help you feel safe & to make sure criminals feel the pressure.’

Two men arrested over Olivia’s death were bailed on Saturday.

A 36-year-old man, from Huyton, was recalled to prison after breaching the terms of his licence.

Both he and a 33-year-old man, from Dovecot, were arrested on suspicion of murder and two counts of attempted murder.

Merseyside Police appealed for people to come forward with information ‘so we can build up a strong evidential picture and bring those responsible to justice’.

The force has previously released an image of a black Audi Q3, which has been seized and which they believe is the car used to take 35-year-old Nee to hospital.

They are still appealing to anyone who saw the vehicle in the days leading up to the shooting, or has any information about its movements after leaving Kingsheath Avenue last Monday night, to come forward.

In other social media appeals, police have insisted ‘silence is not an option’. 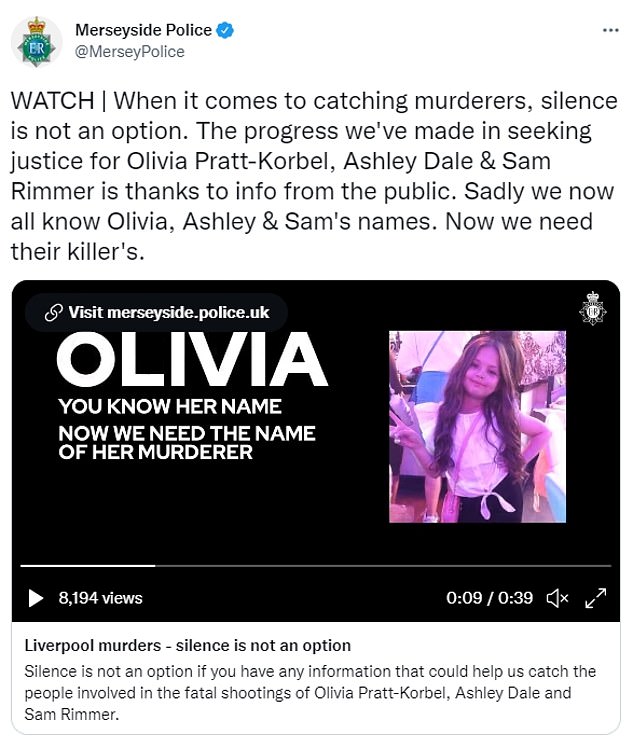 In a short but dramatic video appeal on Twitter, Merseyside Police warned that anyone withholding information must give it up 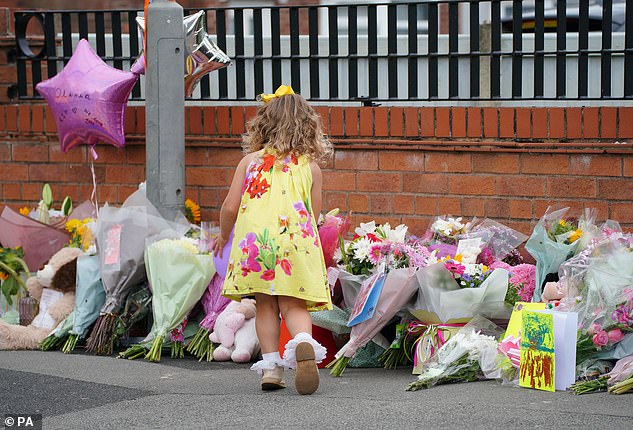 Warning that there is ‘no hiding place for anyone involved in the murder of little Olivia’, they added: ‘We need names.’

Assistant mayor of Liverpool Harry Doyle said people had come forward in the days since the murder because they ‘want to see justice’ for the little girl and her loved ones, and that the arrests had brought ‘a sense of hope and relief’.

Olivia’s family have urged people to ‘do the right thing’, saying that speaking up ‘is not about being a ‘snitch’ or a ‘grass’, it is about finding out who took our baby away from us’.

In their overall crackdown on organised crime, police said they had made almost 200 arrests and seized vehicles, drugs and weapons in the past week.

The force tweeted: ‘We have arrested 170 people & seized several vehicles, suspected Class A and B drugs, and firearms over the past week in an operation targeting serious and organised crime across Merseyside.’

Police flooded the street where Olivia Pratt-Korbel was killed yesterday before carrying out searches with sniffer dogs as the hunt continues for the murder weapon.

Dozens of officers from the anti-gang Matrix squad arrived on the road in the Dovecot area of Liverpool for painstaking searches lasting several hours. 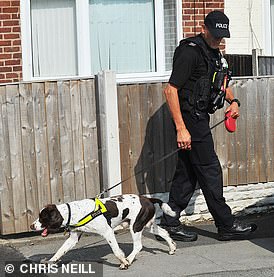 Dozens of officers from the anti-gang Matrix squad seen in the Dovecot area of Liverpool yesterday for painstaking searches lasting several hours. 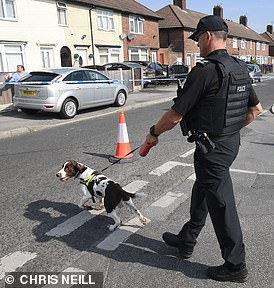 ‘It’s the largest police presence we have had here since last Monday when she was killed,’ the resident told The Sun .

Police have launched a huge crackdown on organised crime in Liverpool in coordination with the National Crime Agency, known as ‘Britain’s FBI’.

In recent days there have been numerous reports of gang bosses moving drugs out of the city and fleeing to their foreign villas.

Last night an underworld source claimed the gangsters who ordered the shooting of burglar Joseph Nee – which led to Olivia’s killing – were ‘feeling the heat’. 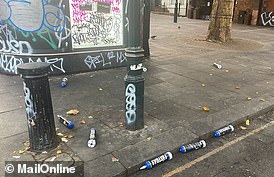 The firm’s website strongly suggests they are also intended for recreational purposes, with a section reading: ‘We find your privacy very important, for this reason we do not use logos on the box’

Dozens of officers from the anti-gang Matrix squad seen in the Dovecot area of Liverpool yesterday for painstaking searches lasting several hours.