Smith was executive chairman of Speedway Motorsports, which owns and operates auto racing speedways across the country. He was named executive chairman in 2015 after serving as SMI chairman and chief executive officer since 1995. He was succeeded as SMI CEO by his son, Marcus Smith.

SMI’s holdings include 11 racing facilities that currently host 15 NASCAR Cup Series events in 2022, including four of the series’ 10 playoff races.

Bruton Smith, one of the richest people in the United States, according to Forbes magazine, was known for his auto racing empire but also owned and operated automobile dealerships across the country under Sonic Automotive, launched in November 1997.

The NASCAR family mourns the loss of Hall of Famer and visionary track operator, Bruton Smith.

Smith began promoting dirt-track races in North Carolina as an 18-year-old. In 1949, he ran the National Stock Car Racing Association, a Georgia-based racing sanctioning body that was a rival to NASCAR, which Bill France Sr. had formed in 1948.

France and NASCAR won that competition, as the NSCRA faded. But Smith returned to the sport in 1959, joining driver Curtis Turner to build Charlotte Motor Speedway after he and Turner had announced separate plans to build tracks in the Charlotte area. The track construction costs ran well past budget, and Smith eventually lost control of the speedway in bankruptcy proceedings.

After building a successful chain of car dealerships, Smith re-entered NASCAR in the mid-1970s, buying enough shares in CMS stock to regain control of the speedway. He and former track president H.A. “Humpy” Wheeler turned the track, actually located in Concord, N.C., into an auto racing palace, adding huge grandstands, condominiums and other innovations unheard of in racing circles at the time. The track was the first major speedway to host night races. 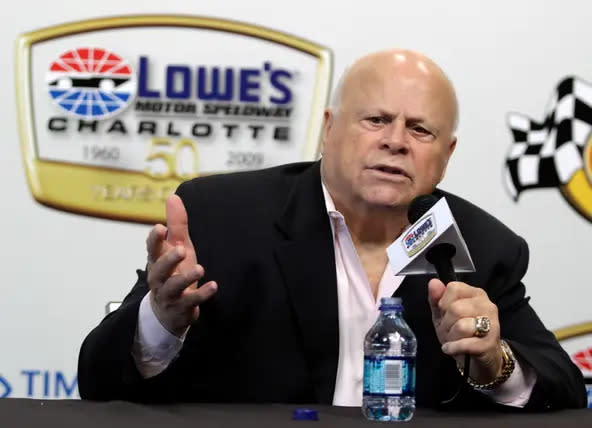 Through much of his auto racing career, Smith was at odds with first Bill France Sr. and later Bill France Jr., who followed his father into the NASCAR presidency. They argued about race dates, race purses, the expansion of the Sprint Cup Series and other subjects over the years.

Smith also played a heavy role in philanthropic efforts, founding Speedway Children’s Charities in 1982. According to that organization’s website, Smith wanted to help children in need and was moved to start the group as a legacy for Bruton Cameron Smith, a son who died young.

Although he battled numerous health problems in his 80s, Smith remained very involved in the operation of his automobile businesses and speedways, often declaring he would never retire. He often appeared at news conferences and in speedway media centers in the final years of his life to verbally spar with reporters and deliver praise or criticism to NASCAR officials.

Smith was inducted into NASCAR’s 2016 Hall of Fame class. Smith led the voting with 68 percent of ballots cast; ironically, Turner also was chosen that year.

“It will truly be an honor to be remembered at the Hall of Fame along with people like Dale Earnhardt, Richard Petty, Glen Wood, Junior Johnson, Darrell Waltrip and so many others who helped build this sport,” Smith said in a statement released by Charlotte Motor Speedway when he learned he was tapped in May 2015. “That’s what I’ve tried to do my entire life. I’m a frustrated builder who had a knack for promoting races, and it’s been fun to always try to push the sport to greater heights for the fans.”

A few days later, Smith, sitting in the owner’s suite as the Coca-Cola 600 took the green flag at Charlotte Motor Speedway, told a small group of reporters he had all but given up hope of being chosen for the Hall.

“I had not thought anything about it, quite honestly,” he said. “I think I gave up on it at least a year or two years ago. It’s amazing the reaction about this, and I think that’s very special.”