New York: Senator Elizabeth Warren of Massachusetts, who has ramped up her criticism of her presidential opponents after months of avoiding conflict, issued another rebuke on Thursday in New Hampshire. She took thinly veiled shots at former Vice President Joe Biden and Mayor Pete Buttigieg of South Bend, Indiana, and called out former New York City Mayor Michael Bloomberg by name. 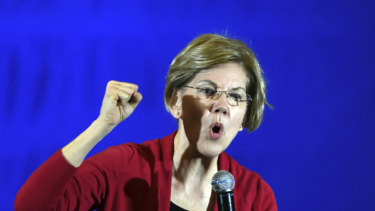 In the speech, delivered at the New Hampshire Institute of Politics in Manchester, Warren called unnamed rivals "naive" for their willingness to believe that they can produce meaningful change without directly challenging the wealthy and powerful.

"Unlike some candidates for the Democratic nomination, I'm not betting my agenda on the naive hope that if Democrats adopt Republican critiques of progressive policies or make vague calls for unity that somehow the wealthy and well-connected will stand down," she said, according to prepared remarks.

Warren also used the speech to highlight the thesis of her economic message, saying, "The key question isn't big government versus small government — it's who government works for."

She pitched her plan to upend markets through government regulation as both good politics and policy, a way to build "a grassroots movement of Democrats, independents and Republicans" and "produce an economy with more growth, more opportunity and more freedom."

In a remark apparently directed at Biden, who has said he believes Republicans in Congress will work with his administration if he is elected president, she said: "Unlike some candidates for the Democratic nomination, I'm not counting on Republican politicians having an epiphany and suddenly supporting the kinds of tax increases on the rich or big business accountability they have opposed under Democratic presidents for a generation."

She also drew distinctions with Buttigieg, with whom she has traded attacks in recent days, particularly on the issue of financial transparency. Warren and Buttigieg are considered the front-runners for the all-important Iowa caucuses in February and are competing nationally for an overlapping set of college-educated liberals.

Without saying his name, Warren noted that Buttigieg "calls people who raise a quarter-million dollars for him his 'National Investors Circle,' and he offers them regular phone calls and special access. When a candidate brags about how beholden he feels to a group of wealthy investors, our democracy is in serious trouble."

Hours before Warren gave the speech, the Biden campaign released a slew of endorsements from six current and former New Hampshire mayors, including from cities such as Portsmouth, Rochester and Dover.

The speech is another example of how, amid stalling poll numbers and a need to recapture the energy that made her this summer's progressive candidate du jour, Warren is no longer relying on her affirmative message alone to drive supporters into her corner.

We will beat the most corrupt president in American history by campaigning on the most aggressive anti-corruption platform since Watergate.

"It's no secret that I'm not a fan of Michael Bloomberg trying to buy the Democratic presidential nomination," she said, continuing her trend of criticising only Bloomberg, a billionaire who recently entered the race and has already spent millions of dollars on advertising, by name.

Missing from her remarks was Senator Bernie Sanders of Vermont, the race's other ardent progressive. Sanders has leapfrogged Warren in some national polls in recent months and secured big endorsements from national grassroots groups, but Warren has yet to invoke him directly.

Instead, as her campaign has done for months, Warren sought to create soft contrasts in tone and tenor. Sanders has said billionaires should not exist, while Warren, in the New Hampshire speech, said, "a wealth tax on millionaires and billionaires isn't about being punitive or denigrating success."

She also framed her pitch around another issue where she and Sanders have some daylight: Warren has offered a plan to reshape Washington rules and end lobbying.

"No other candidate has put out anything close to my sweeping plan to root out Washington corruption," Warren said.

"That's our path to beat Donald Trump in 2020," she added. "We will beat the most corrupt president in American history by campaigning on the most aggressive anti-corruption platform since Watergate."