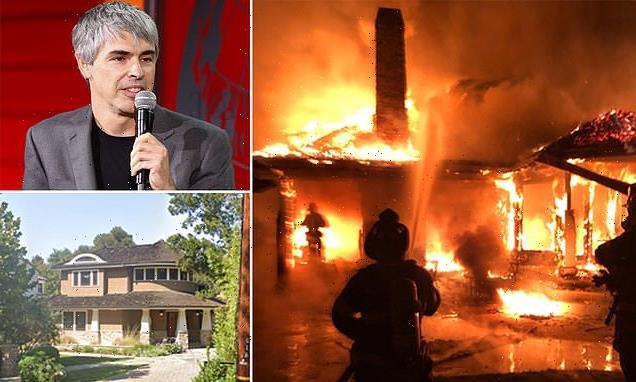 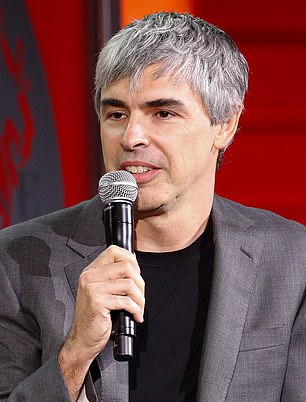 A mysterious Palo Alto mansion that appears to be owned by Google founder Larry Page has been destroyed in a massive fire.

The six-bedroom home on Bryant Street was severely damaged in the blaze on Tuesday night, after a neighbor who was not at home spotted the fire on a security camera and called 911.

The mansion is either owned by Google or Page himself, and is ‘used as an office by a small team of workers’ with many cars frequently outside during the day but no activity at night, a neighbor told Palo Alto Online.

Though it’s unclear what Page, 48, may have used the building for, his family investment office has never been publicly identified, and little is known about how he manages his $123 billion fortune. 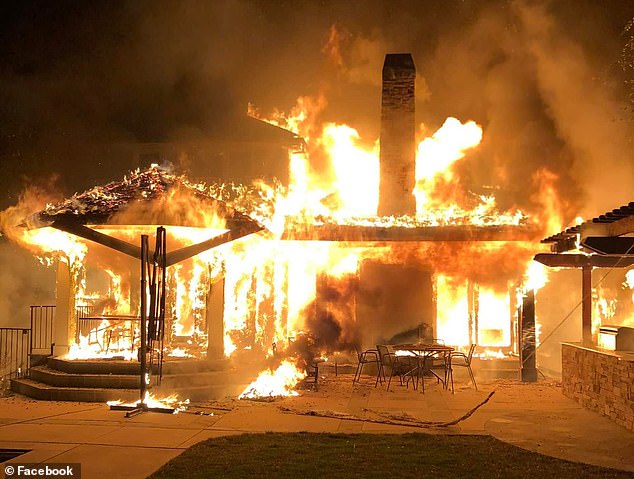 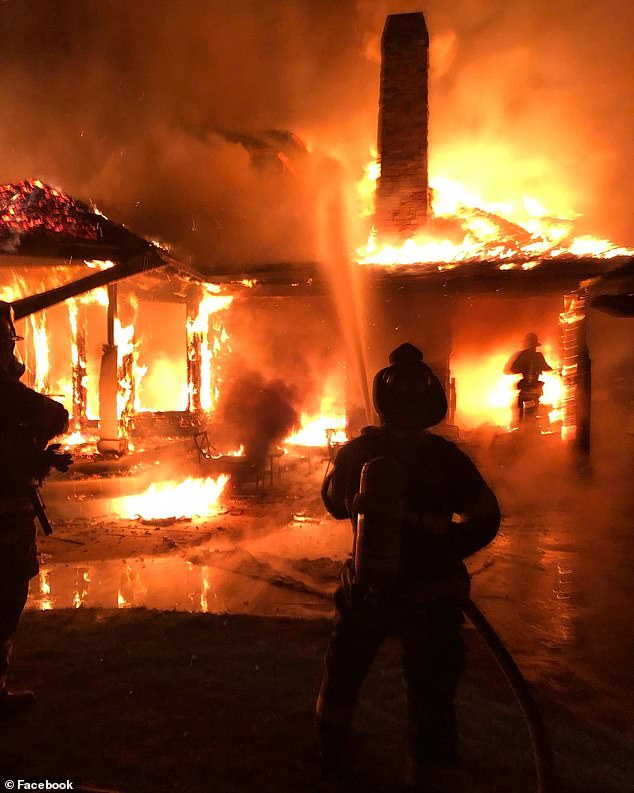 The six-bedroom home on Bryant Street was severely damaged in the blaze on Tuesday night, after a neighbor who was not at home spotted the fire on a security camera

The mansion was heavily damaged in the fire, which was concentrated in the rear of the home

Google and the Palo Alto Fire Department did not immediately respond to inquiries from DailyMail.com on Friday.

The fire department said in a press release that a 911 call first came in at 8.10pm on Tuesday, when ‘a resident, who was not home at the time, saw fire on a security camera.’

Nobody was inside the mansion at the time of the blaze, which was concentrated toward the rear of the building, the fire department said.

The fire consumed both stories of the structure and had spread to three sides of the building when crews arrived.

The fire department called for a three-alarm response due to the challenges of fighting the blaze, and police evacuated neighbors on both sides of the building. Two firefighters suffered minor injuries while battling the fire.

The cause of the blaze is currently under investigation. 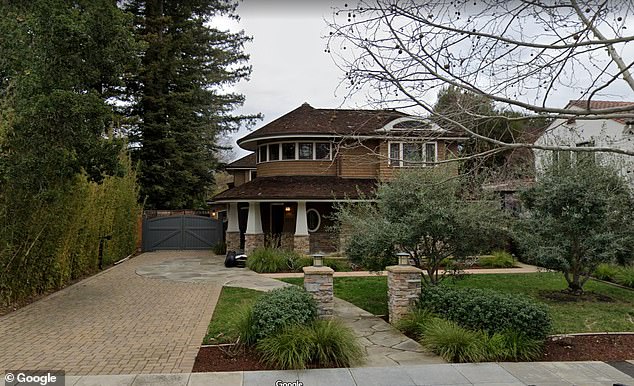 The mansion, seen from the street before the fire, is either owned by Google or Page himself, and is ‘used as an office by a small team of workers’ according to a neighbor 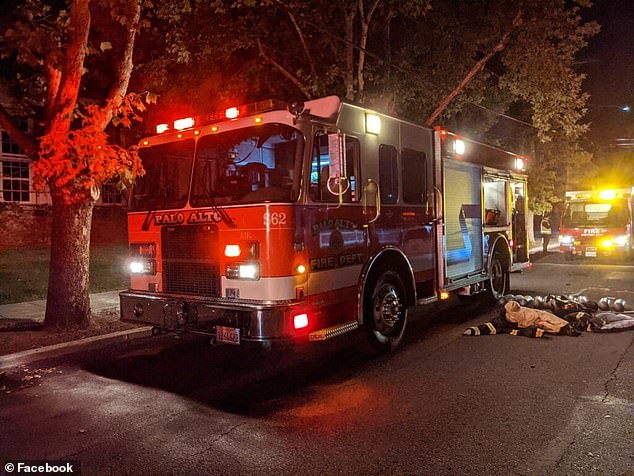 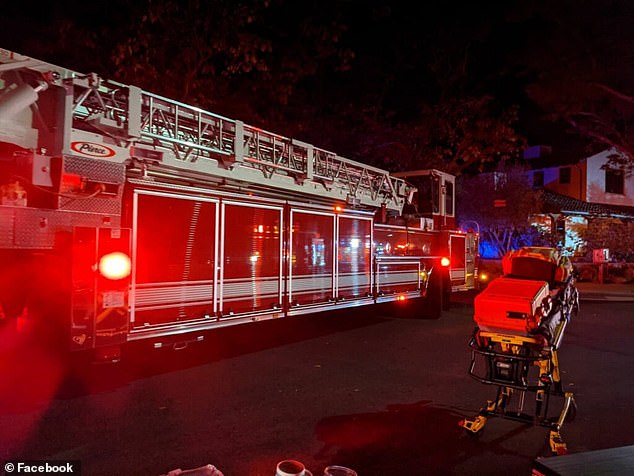 Nobody was at home when the fire broke out, but neighbors were evacuated on both sides

Page owns several homes in the neighborhood and is jealous in guarding his privacy, a neighbor told the Daily Beast.

‘He owns different properties in different places,’ the neighbor said. ‘He has family members living in some of them and tenants living in others.’

‘The homes are well kept, they’re good neighbors, and we don’t want to trouble him.’

The Bryant Street home is currently valued at $10.9 million, and was purchased in 2012, the same year that 2175 Bryant Street LLC was formed as an apparent special vehicle for shielding the home’s true owner.

At around the same time, Page was snapping up properties around Palo Alto, and drew concerns from neighbors  over a huge digging project that neighbors speculated was a bunker.

Page, an elusive figure who has not spoken in public since December 2016, was discovered in July to be living ‘off the grid’ on an isolated Fijian island, where he has apparently spent most of the pandemic.

In August, officials in New Zealand confirmed that the billionaire had been granted residency in that country. 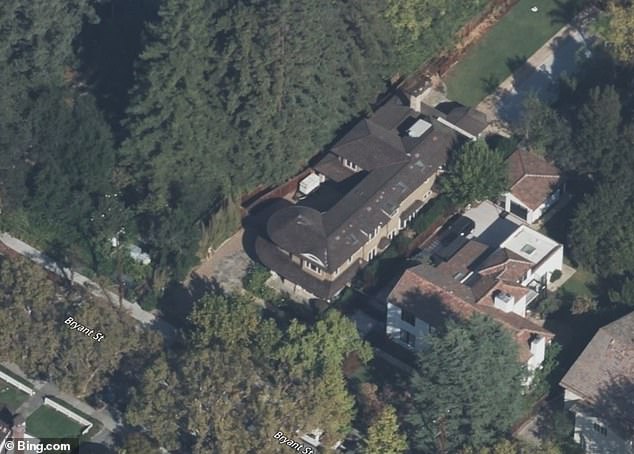 The mansion, seen center, is valued at $10.9 million and is owned by an LLC that is registered at the same address as Page’s charitable foundation

New Zealand lawmakers confirmed that Page and his son first arrived in New Zealand in January after the family filed an urgent application for the son to be evacuated from Fiji due to a medical emergency.

Gaining New Zealand residency would not necessarily affect Page’s residency status in the U.S. or any other nations.

Some local news organizations reported that Page had since left New Zealand.