This is the shocking moment two motorcyclists in India narrowly avoided being crushed by a lorry as it toppled over.

Video footage has emerged of a lorry driving erratically on the National Highway 62 in Rajasthan, India, yesterday.

At the start of the clip the lorry is seen to swerve between lanes, with traffic such as motorbikes and other lorries heading straight for it. 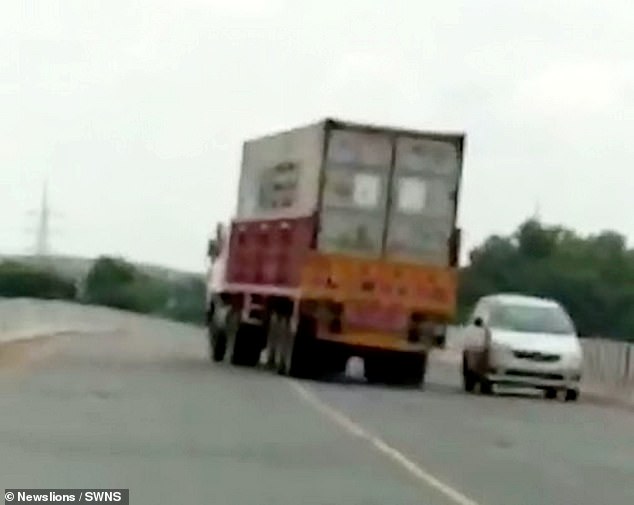 The lorry swerves out of the way of an oncoming car on the National Highway 62 in Rajasthan, India, yesterday 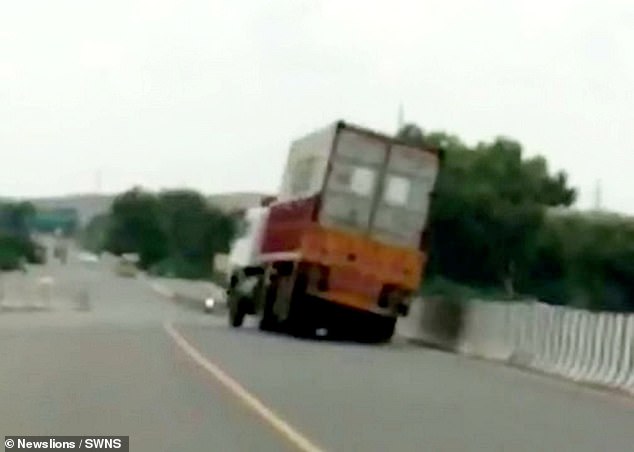 Further along the road, the lorry slips into the wrong lane again and attempts to correct its course but turns too sharply causing the back end to start lifting

As the lorry approaches a bridge, it continues to slip between lanes, seemingly unaware of oncoming traffic.

Despite being unable to see above the ridge of the bridge, the lorry continues to sway into and out of the wrong lane

Traffic in the opposite lane begins to get heavier but the lorry still sways into it, narrowly avoiding a motorbike and car.

Suddenly, while driving in the wrong lane, the lorry tries to swerve back into the correct lane but turns too quickly and topples over.

Crashing into the side of the bridge, two motorcyclists managed to avoid the truck as it fell over in a cloud of dust.

It is claimed that the truck driver was drunk behind the wheel and was severely injured in the crash.

The driver was taken to hospital by passers-by to be treated for his injuries.