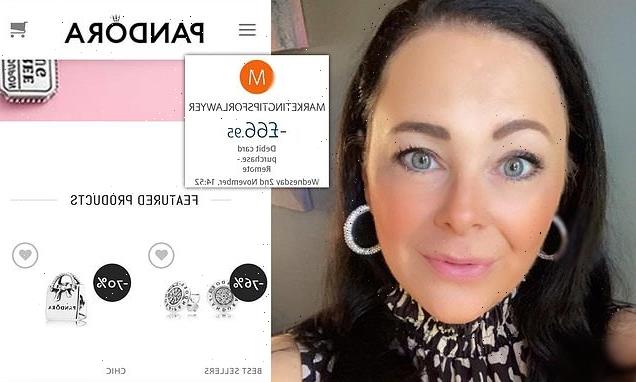 A mother who was duped by a ‘scam’ website while trying to buy a Christmas present for her daughter has warned others about the potential dangers of online shopping.

Thirza O’Boyle, 43, said she was left ‘sobbing’ after realising the Christmas presents she had bought online for daughter Darcey turned out to be from a ‘scam website’ almost identical to the real one.

The teaching assistant from Corby, Northamptonshire, said she became aware of the ‘online scam’ after being alerted via her banking app of a £61.80 charge to an unknown recipient.

Ms O’Boyle said she opened the confirmation email from the website, which read: ‘Please note ‘MARKETINGTIPSFORLAWYER’ will be displayed on your credit card statement instead of the website from which you purchased the mentioned product.’ 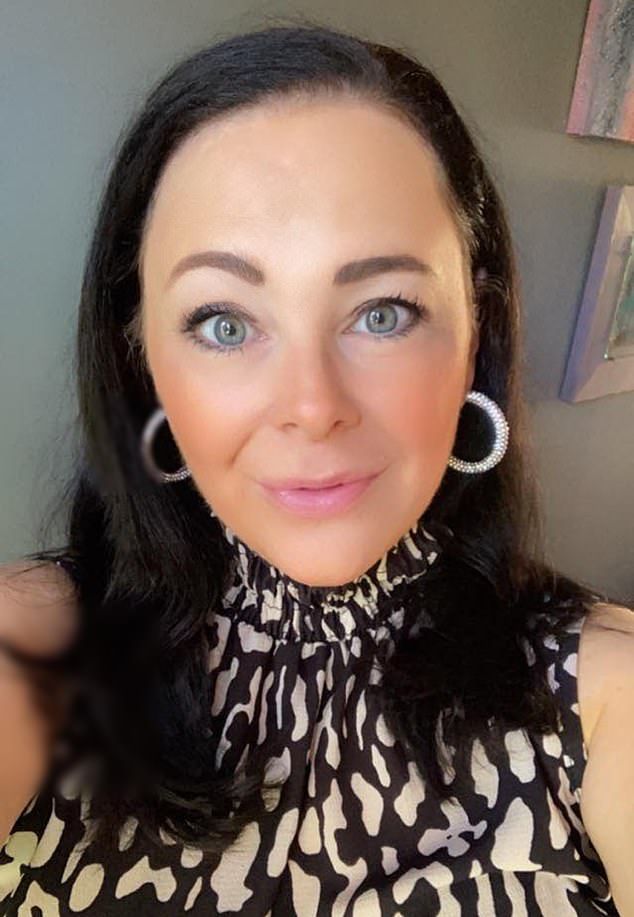 Thirza O’Boyle, a mother from Northamptonshire, is warning other shoppers to be vigilant of online scams ahead of the festive season 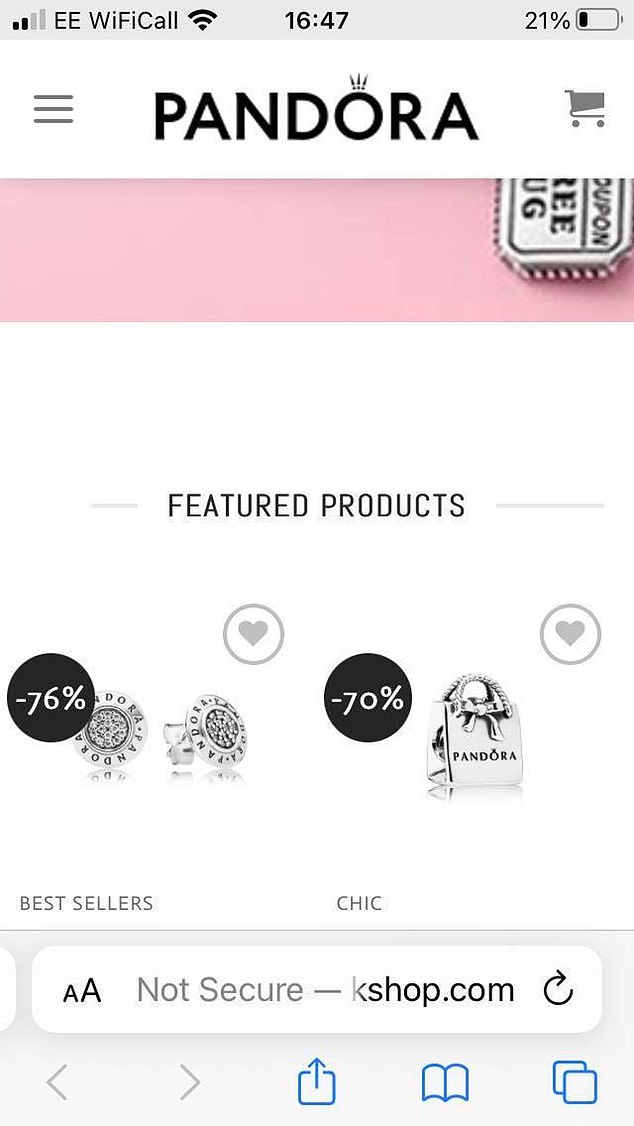 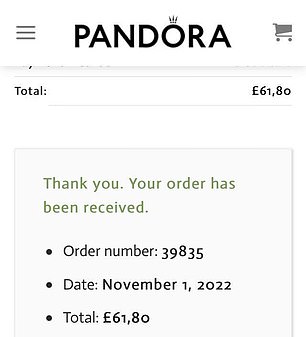 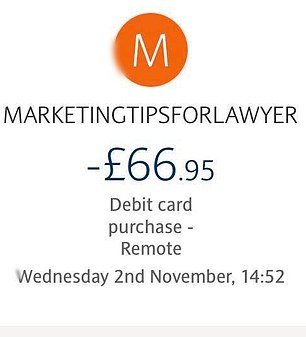 Ms O’Boyle paid £61.80 for what she believed were Pandora items but started to suspect she had been scammed when she got a notification from her banking app telling her the money was billed by ‘MARKETINGTIPSFORLAWYER’

Ms O’Boyle called her bank in an attempt to rescind her cash but was advised that an investigation may not be successful due to the payment being taken with her consent.

She took to social media last Wednesday to warn others of falling victim to scam websites as Christmas draws nearer.

She wrote: ‘Well I feel absolutely stupid right now! I typed in ‘Pandora sale’ on Google and clicked on what I thought was the genuine site. 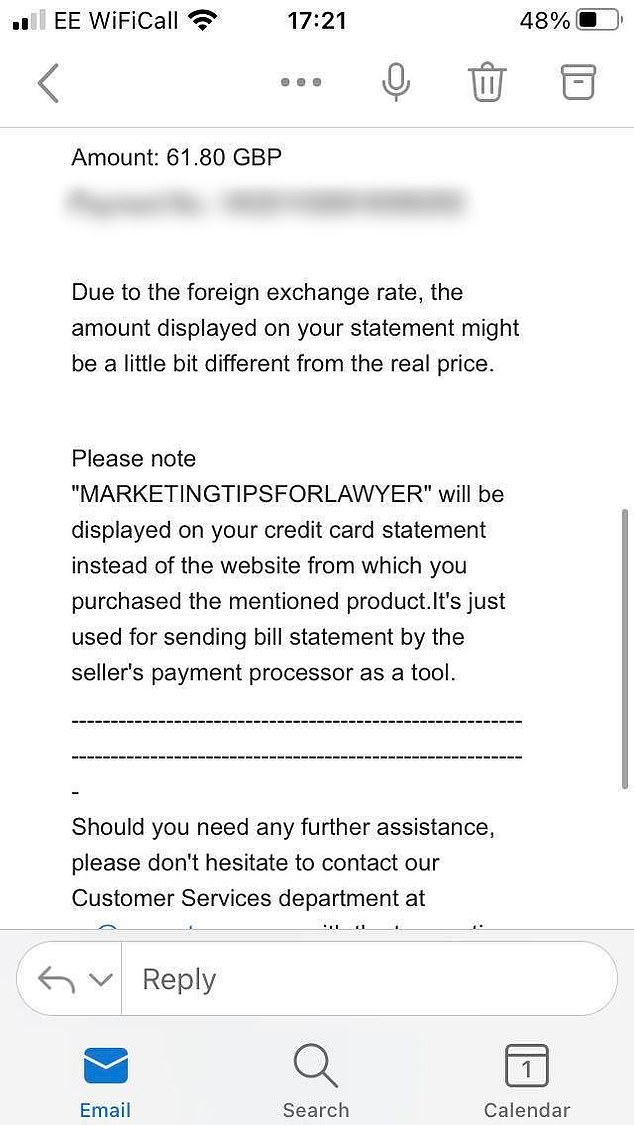 Ms O’Boyle said that after paying for her items, she received an email telling her  ‘MARKETINGTIPSFORLAWYER’ will be displayed on your credit card statement instead of the website from which you purchased the mentioned product’, piquing her suspicions.

‘I checked my email and in my junk mail, I had an email from a random address with the confirmation of a payment of £61.80 but that some random name will appear on the statement.

‘I started panicking as this was obviously not genuine Pandora at all. I’ve rung my bank and stopped my card and I’m now hoping I can dispute the payment but I’ve been sobbing for ages.

‘It was an order for Christmas presents for my daughter, using the savings I’ve put away to cover Christmas. Please, please let this be a lesson that all is not as it seems. I’m gutted.’

The post has received hundreds of likes and comments, with many sharing their own experiences of falling for online scams.

One person said: ‘I’ve done exactly the same thing. I saw a site that was selling a Lego Disney castle for £40 and thought it was great.

‘I was mega annoyed when a pair of Rayban glasses turned up on my doorstep. It was a dodgy website but I managed to dispute the charge and get my money back.’

Another wrote: ‘So many fake sites. You can literally buy anything fake these days.

‘I got some GHDs once and they went bang and set alite [sic] one time while in my hand. Hope you get your money back.’

A third added: ‘I did this last year and spent over £100. The bank did end up getting my money back. When something seems too good to be true it normally is.’

Ms O’Boyle shared several photos of the website without a secure padlock next to the web address, as well as the invoice reference, with the hope that it would help others avoid falling for it too.

She has not received any items that she ordered yet and has thankfully not had any extra funds removed from her account since cancelling her card and raising the investigation.

Speaking last week, she said: ‘I first Googled ‘Pandora sale’ and clicked on the link that I genuinely thought was the real Pandora website.

‘After looking around, I bought some items and paid for them, using my debit card, and the amount came to a total of £61.80.

‘Soon after, I received a receipt which went into my junk mail and when I opened it, the email said that the invoice for the card payment would show as ‘marketing tips for lawyer’.

‘That was when I realised that it was a scam and quickly checked my banking app. I discovered they had actually taken £66.95, despite me having a receipt for a different amount.

‘Looking closely, I then realised it wasn’t a UK company at all, it was a scam website and there had been an exchange rate calculation.

‘The bank is now doing a full investigation but I’ve been told it might not be successful as I made the payment. Hopefully, my post can help stop it happening to someone else.