Have a SPOOK in the mirror! Mother, 21, claims Snapchat selfie is ‘proof’ her home is haunted after spotting face of ghostly old woman in photo

A terrified mother claims to have captured the haggered face of an old woman that allegedly haunts her family home in a photo.

Chloe Lythgoe, 21, was pouting in the bathroom mirror for Snapchat when she took the image – and sent it without thinking – before spotting what she believes is a ‘ghost’ crouching in the corner.

The supermarket worker says she has always felt ‘like I am being watched’ at her home in Warrington, Cheshire, where she lives with children Noah, three, Hallie, two, and Isla, five months.

She claims that keys often go missing, doors slam and once her ex-boyfriend saw a vase mysteriously smash in the bathroom.

The mother said the photo gives her ‘chills and goosebumps’ and argues that it is proof her home is haunted. 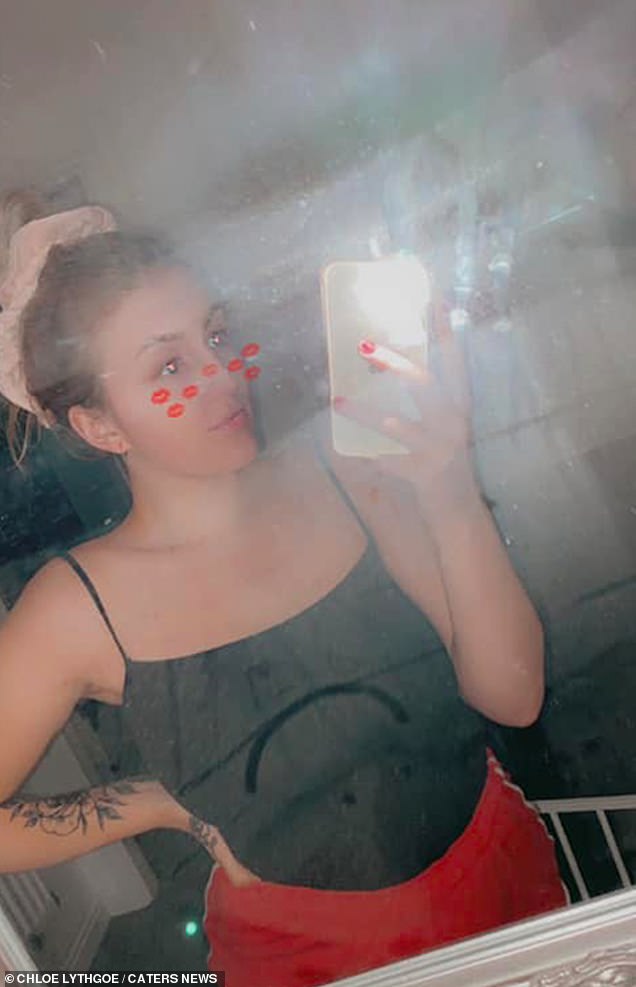 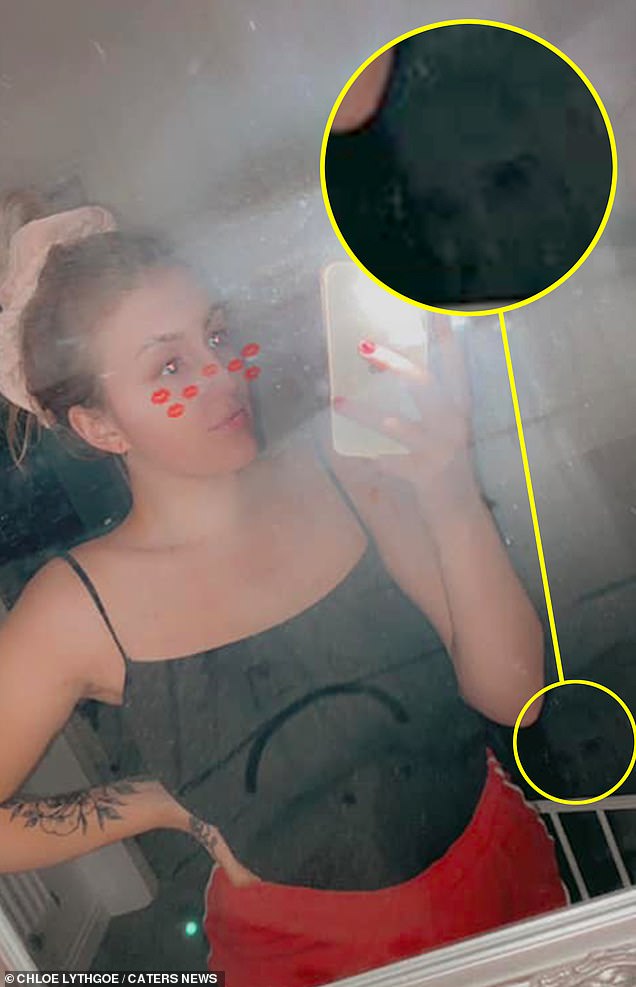 Chloe Lythgoe, 21, took this picture at home in Warrington, Cheshire. The mother claims the alleged ‘face’ in the bottom right-hand corner proves her home is haunted 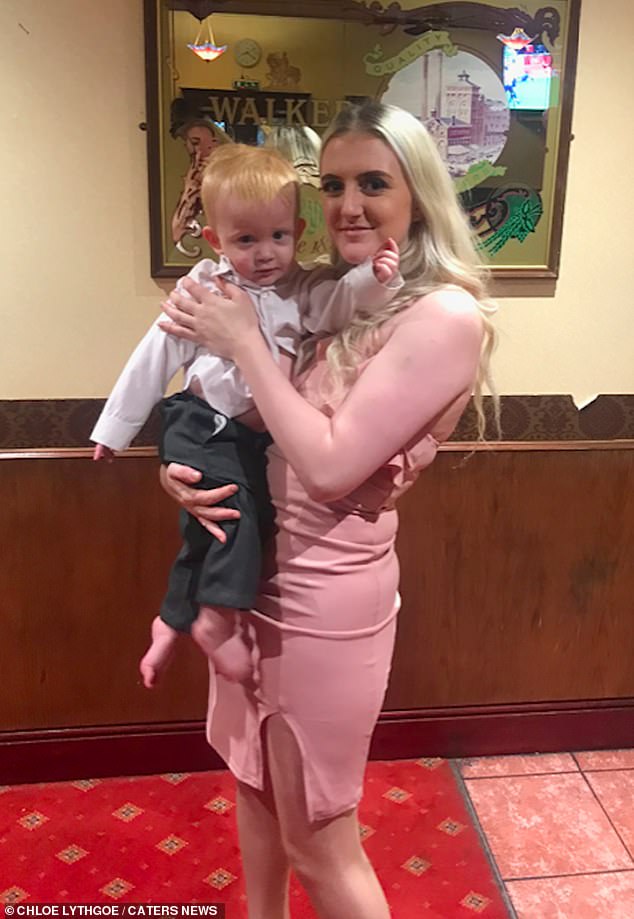 The mother, pictured here with son Noah, three, says there have been a lot of strange occurrences in the property since she moved in in April 2018

The mother, who is on maternity leave from working in a supermarket, took the bathroom selfie on July 9 after tucking up her children.

‘I went into the bathroom and thought I’d take a picture in there,’ she said. ‘I didn’t look at it, I just snapped it and walked off.

‘When I went to write a caption on the photo, I froze and went cold.. My heart skipped a beat and my head went fuzzy when I saw the ghostly figure.

‘I thought maybe I was just tired and seeing things, but when I looked again I got chills and goosebumps all over.’

When she posted the photo on a Facebook group, social media users advised her to ‘get out’, ‘burn the house’ and ‘run’.

She has also tried to re-create the image with her sister and her sister’s boyfriend, but had no success.

‘We all stood at the mirror, taking more pictures to see if it was just dirt or dust on the mirror. But we got nothing. No more faces, no more clues and no more answers about who this lady was or why she was here.’ 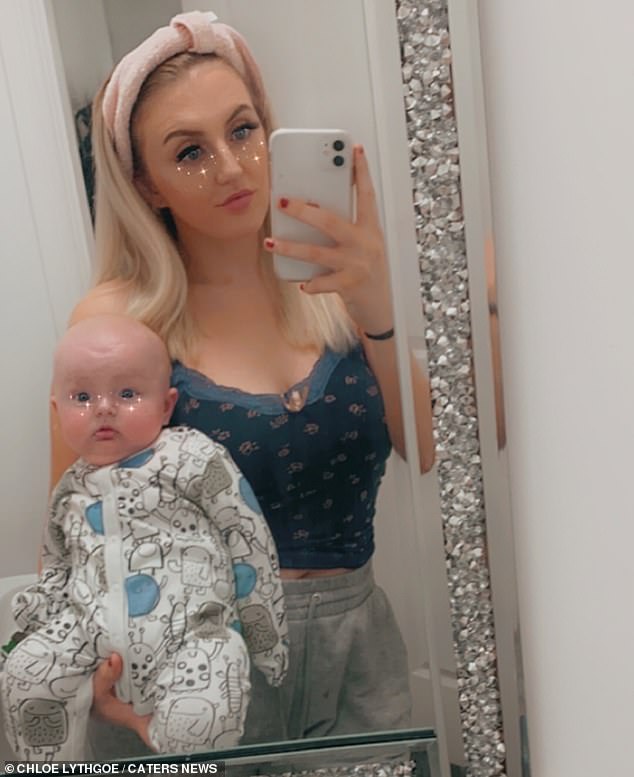 She also said that her daughter Isla, five months, was once scratched by the alleged ‘ghost’ 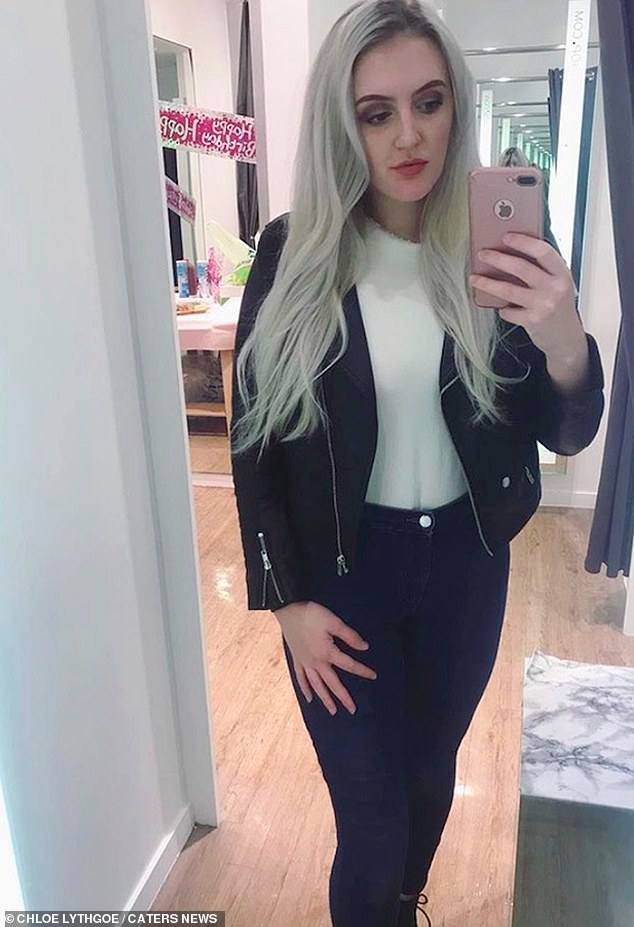 Chloe said that whenever visitors come to her house they know not to put their keys down, as they’ll vanish.

‘It’s not due to the kids because none of them can reach the kitchen bench tops and kitchen tables,’ she said.

‘My ex told me one day the vase in our bathroom randomly smashed and then he found the tap turned on full blast with boiling water.

Spooky occurrences at the home in Warrington, Cheshire

Chloe claimed that her home in Warrington, Cheshire, is haunted.

She moved into the house in April 2018, and alleges that ever since then she feels like she is being ‘watched’.

The mother-of-three said items such as keys often vanish in the house.

She alleged that once her ex saw a vase randomly break in the bathroom, and that on Halloween a trick-or-treater told them a spooky woman had appeared in the upstairs window.

The supermarket employee added that once her five-month-old daughter Isla got three scratches on her face, that she claims came from a ‘ghost’.

‘On Halloween last year we decorated the house and a boy came to our door trick or treating.

‘He told us that our decorations were amazing and that he loved the creepy old woman upstairs in the window.

‘After he left with his sweets I started thinking about what he said. What old woman upstairs?

‘Then in June this year, my baby Isla was playing on a blanket and then suddenly began crying out of nowhere. I went over and noticed 3 big scratches on her head and on her back.

‘I was so confused because there was nothing around her when this happened and the other kids were outside playing. But I just comforted her and forgot about it.’

Talking about the photo, she added: ‘I think the figure in the photo looks like an old lady. Nobody I know has died recently and it doesn’t look like anybody in my family who has already passed.

‘I think it is the old lady that the little boy was speaking about on Halloween.’

Chloe said that while she understands not everyone believes in the paranormal, she attests that the photograph is 100 per cent real.

She added: ‘I know there will be people out there thinking ‘she’s photoshopped it, that’s fake’ and I completely understand.

‘Everybody has their own beliefs and everybody is entitled to their opinion.

‘I never used to believe in the paranormal. However since experiencing all these things I’ve changed.

‘Whoever this old lady is and whatever she wants is unknown. Hopefully I can help her with so that she can finally be at peace.

‘Until then, I’m keeping my bedroom lamp on when I sleep because I can never un-see what is in that picture.’