A toddler has cheated death after being knocked down and run over by a car while playing on the pavement in northern China.

More than a dozen onlookers teamed up to lift the vehicle of the two-year-old girl within two minutes after she was trapped under the wheel, reported state media.

The girl sustained fractures on her skull, deep cuts on her head and bruises across her body. She was said to be in stable condition. 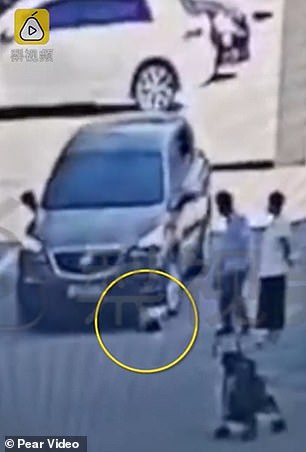 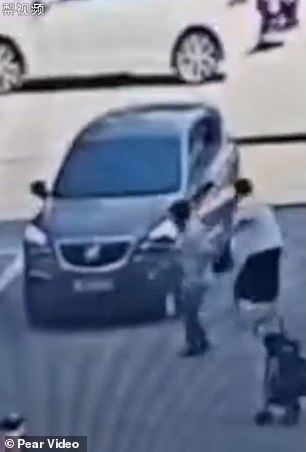 Surveillance footage shows the two-year-old girl being knock down and ran over by a car while playing on a a stretch of pavement which doubled as a car park in the city of Gaobeidian, Hebei

The accident took place last Tuesday in the city of Gaobeidian in Hebei Province, according to state broadcaster CCTV.

Surveillance footage shows the girl was squatting and playing on a stretch of pavement which doubled as a car park seconds before being hit.

Two adults were standing next to the child at the time of the accident. One of them rushed over to the car after the toddler disappeared under the wheel.

It remains unclear whether or not the pair were minding the girl.

Residents, workers at the stores nearby as well as police officers quickly gathered after the driver of the car yelled for help, the report said. 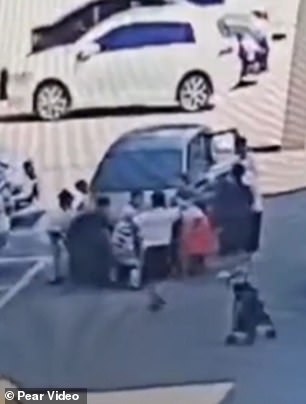 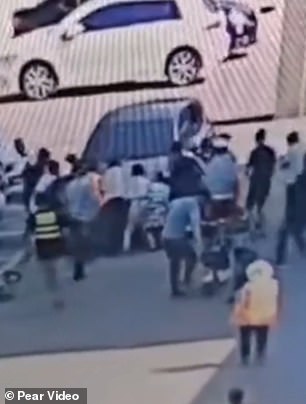 A police officer said around 20 people joined forces to free the girl within two minutes by lifting the car off her. She was in stable condition after receiving emergency treatment

One eyewitness told CCTV she could see the girl’s two feet poking out from under the car when she dashed out to help.

‘Her head was stuck under the car. So I immediately shouted at my colleagues asking them to come out and help,’ said the woman who worked for a dumpling restaurant.

A police officer said around 20 Good Samaritans joined forces to free the girl.

‘We lifted the car and freed the child. Afterwards, (one officer) hailed down a passing car which took the girl to a hospital,’ the policeman, named Duan Guolin, told CCTV. 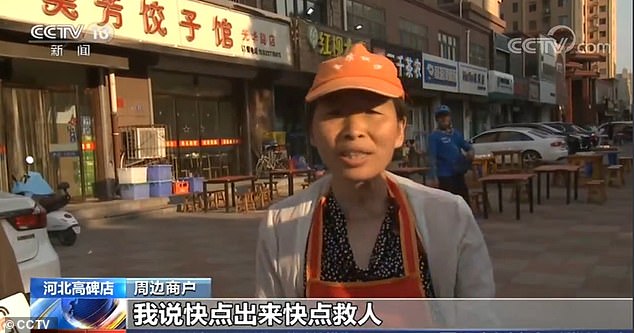 A worker at a dumpling restaurant said she could see the girl’s two feet poking out from under the car when she rushed out. She recalled the terrifying accident to state broadcaster CCTV

The child was found to have fractures on the right side of her occipital bone – the bone that covers the back of a person’s head.

She also suffered lacerations on the back of her head and multiple wounds on her body.

A police officer told video news outlet Pear that the girl was first taken to a local hospital. She was then transferred to a hospital in Beijing about 50 miles away for better medical attention.

She was given treatment in Beijing before being sent to a hospital in Baoding, the city that supervises Gaobeidian.

The toddler was in stable condition, the officer said.