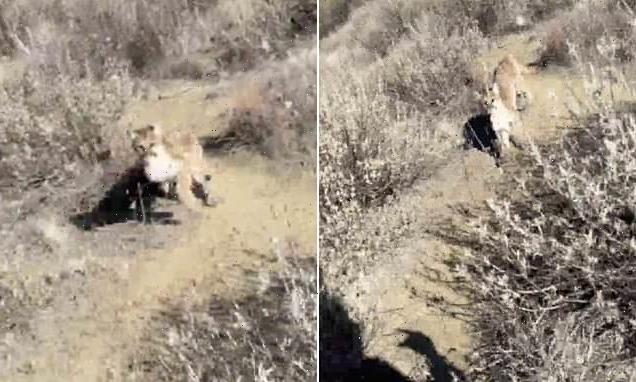 Turning the tables! Moment terrified hiker ROARS at mountain lion to scare it away

This is the moment a hiker turned the tables on a mountain lion that was stalking him by roaring at it, causing it to flee in fear.

The footage, captured on January 8 in Los Angeles, shows a man enjoying a scenic hike against a hot, arid backdrop.

Suddenly, a well-camouflaged mountain lion is on his tail, bounding after him with bloodlust. 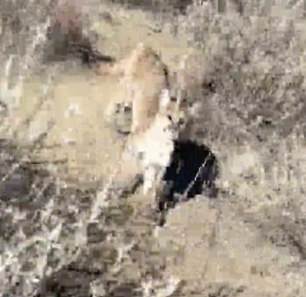 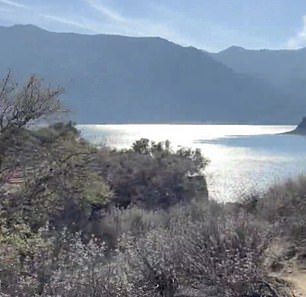 While hiking in Los Angeles, a man turns to find a mountain lion on his trail, although he soon scares it off by giving it a taste of its own medicine and roaring at it

The pursued man turns to face the killer feline and lets out a yell, mimicking the roar of a lion.

Confused and scared by the hiker’s display of defiance, the mountain lion dives into the dry bushes and out of sight of the camera.

The mountain lion appears to be a cub, and nowhere close to the full-adult size of 8ft long and between 130 to 150lbs.

A previous close encounter with a mountain lion occurred in August 2021 when a mother found her five-year-old son had been dragged 45 yards away from his home in Calabasas, Los Angeles County. 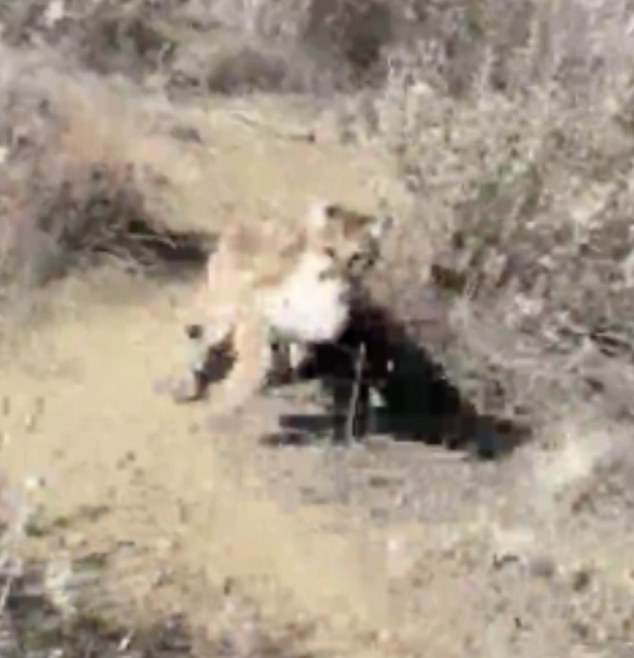 Spooked by the hiker roaring at it, the big cat turns tail and runs, its tan fur helping it to camouflage against the arid Californian backdrop

The boy’s mother had heard the commotion from inside and rushed to his aid, ‘punching and striking the 65-pound mountain lion with her bare hands’ until it let go of her son and fled, said Capt. Patrick Foy, a spokesman for the California Department of Fish and Wildlife.

A wildlife officer later shot and killed the lion.

Meanwhile, in Utah in August 2021, another hiker caught the moment he was stalked by a mountain lion.

Jared Smith was hiking on the Broads Fork Trail at Big Cottonwood Canyon when the big cat crept up behind him.

In the video, Smith backs away while trying to reason with the killer feline, repeatedly telling it ‘I am going away, I promise I am not going to bug you,’ as the cat continues to follow him, occasionally hissing.

Smith never turns his back to cougar and loudly tell the cat he is leaving it’s space, which wildlife experts say was the right move.

What to do if you come across a mountain lion?