A ‘cunning’ conman was caught on CCTV convincing his ‘new neighbours’ he had been locked out and needed to borrow money to collect a set of keys.

Pictures show the ‘cunning’ man jokeing with the kind-hearted couple telling them he is ‘stupidly’ locked out his new house and locksmiths want to charge him £197 to allow him to enter the property.

However, the man, who says his name is Mark, claims he has ‘located some keys’ almost seven miles away, but he has no money for a taxi there and back. Believing the ‘well-spoken’ conman was genuine, both his ‘new neighbours’ offer to lend him the money.

John Harvey, whose CCTV captured the exchange, today said he felt ‘pretty stupid’ for giving him the money as he never returned. 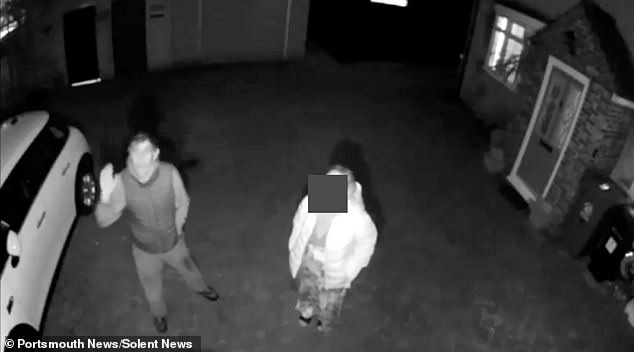 Now police have revealed that the trickster also conned a number of nearby houses, a pub and a garage.

The man had also appeared with another woman in the footage who is one of the neighbours who also believed his story.

Mr Harvey, 67, from Portsmouth said: ‘I’m not normally easily conned but this guy was cunning, it was late at night.

‘It was raining and he had all his facts right – he had a convincing sob story.

‘This is a plan to set up to prey on your moral decency and I want to warn people. Sadly I imagine this shallow scam is working out for him with other people too.’

The CCTV footage shows the gilet-wearing man enter the driveway of the two houses in Portsmouth and start telling his ‘new neighbours’ what has happened. 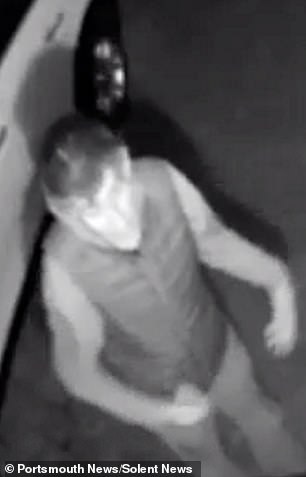 A close up of the man, showing how animated he got when explaining that he needed money for a taxi

He tells the pair he has just moved to the street from nearby Bedhampton, which is ten miles away, but he is locked out.

However, the man claims he can collect a set of keys from someone seven miles away, but would need to borrow money for a taxi there and back.

He says: ‘We’ve just moved here from Bedhampton. Stupidly, I am locked out.’

Laughing, he gestures at the woman stood behind him, who lives next door to Mr Harvey, saying: ‘Sorry, this lady has been laughing with me.’

He goes on: ‘They [locksmiths] want £197 to come and let me in, so now I have located some keys in Farlington, a spare set of keys. But [taxi firm] Aqua will not take, everything is in the house.’

As the woman volunteers to lend him the money, he promises he can get it back to her within 40 minutes and even offers to give them his mobile number.

Hampshire police said it had received a report of the con from a number of addresses near the two houses in the CCTV and were investigating.

A spokesman said anyone who recognises the man or with information should contact them.