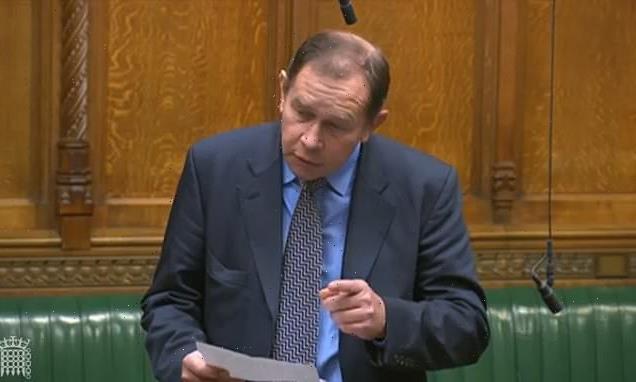 Immigration Minister Robert Jenrick faced a call to quit today after just weeks in the post from a Tory backbencher furious at Channel migrants being rehomed in his constituency.

Philip Hollobone was told ‘don’t be silly’ by Conservative colleagues as he said Mr Jenrick should ‘consider his position’ over the ‘chaotic’ current state of the immigration system.

The Kettering MP accused the Home Office of reneging on an agreement not to rehome arrivals in a  ‘mouldy’ hotel in his constituency.

After officials agreed not to use the building ‘slap bang in the middle of the town centre’ on Friday, more than 40 people had arrived at the weekend, he told the Commons.

‘Serious environmental health issues including mould and no kitchen facilities were raised,’ he said.

‘Northants Police raised serious concerns about community safety and vulnerability of the asylum seekers themselves.

‘No biometric or previous offending history data has been shared with the local police. It is totally 100 per cent unacceptable. 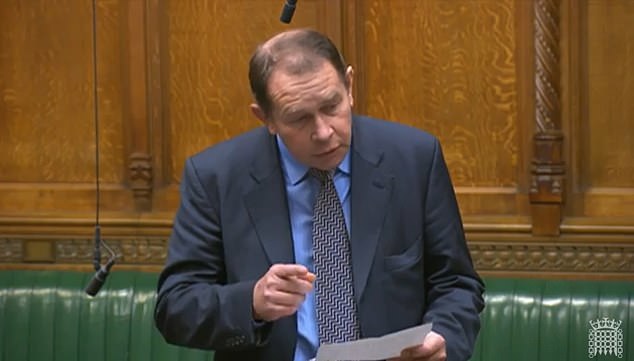 Philip Hollobone was told ‘don’t be silly’ by Conservative colleagues as he said Mr Jenrick should ‘consider his position’ over the ‘chaotic’ current state of the immigration system. 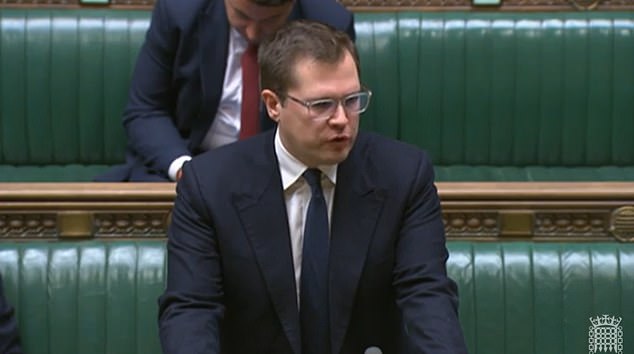 Mr Jenrick, who has been in post less than a month, said he would be ‘happy to make some inquiries’ and come back to Mr Hollobone.

‘I asked the minister face to face on October 27 for a meeting, I asked him again on the floor of the House last Wednesday. No such meeting has been forthcoming.

‘This is a wrong-headed decision; the local police, the local council and I have been misled and I have no confidence at all that the Home Office, Serco or the minister himself have the first clue of what they are doing in relation to this asylum seeker relocation.’

Mr Jenrick, who has been in post less than a month, said he would be ‘happy to make some inquiries’ and come back to Mr Hollobone.

Mr Hollobone’s comments came as the Home Office minister was answering an urgent question on consultation with local authorities in the selection of hotels for contingency asylum accommodation.

He said the Government will aim to improve how it communicates with local councils and MPs when hotels in their areas are chosen to house asylum seekers.

Asking the urgent question, Conservative MP for Clacton Giles Watling said Tendring District Council, in his constituency, had been contacted by email on a Sunday afternoon with ’24 hours notice’ about an asylum accommodation site, adding: ‘This is an inadequate timeframe and shows how poor the comms from the Home Office have been. I personally have not been contacted at all about this issue.’

Mr Jenrick replied: ‘As I understand it, having spoken to officials this morning, a proposition was put to Tendring Council to take a former care home in his constituency which would have accommodated a small number of asylum seekers.’

He added the accommodation had since been ‘dropped by the Home Office’.

Conservative MP Henry Smith called the department ‘dysfunctional’ and asked when it would ‘get a grip and deal with the core problem that this Government has caused’.

The MP for Crawley said a ‘significant number of hotels in my constituency have been used to house migrants’, adding it is ‘starting to cause community tensions and also having an impact on the business community with those hotels not being able to be used’, with one booked up until July 2024.

‘When is his dysfunctional department going to get a grip and deal with the core problem that this Government has caused?’ he asked.

Mr Jenrick said: ‘Well, it’s not the Government that has caused the issue here. The primary focus of our attention should be on the tens of thousands of people who are crossing the Channel illegally.

‘That is putting immense pressure on our asylum system. And frankly, even the most well-oiled machine would have found it extremely difficult to deal with that.