Home Office data shows drug seizures soared by a fifth in a year across England and Wales, as the total number of Brits taking illegal substances hit 3.2million.

London had the highest usage of powder cocaine – as opposed to crack – while the North East had the lowest.

And it was professionals earning over £52,000 a year who were most likely to be taking the drug – with 3.4% having used it in the 12 months to March.

It found London had the highest usage of powder cocaine – as opposed to crack cocaine – while the North East had the lowest. 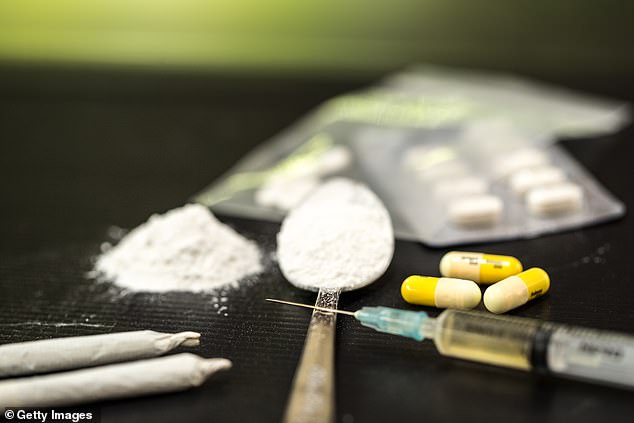 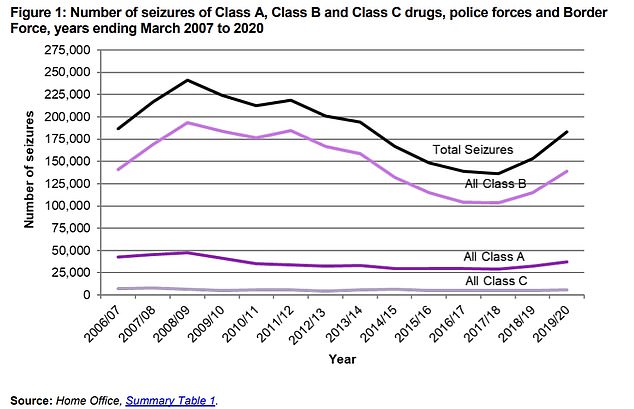 Class B seizures, mostly covering cannabis, are the most common drugs to be seized by police and Border Force officials, Home Office figures have revealed

The rise was ‘mainly driven by an increase in the number of seizures of class B drugs’, a Home Office report said, with cannabis being the most commonly seized drug after it was found in 71% of drug seizures during the period.

Cocaine was found in 10% of seizures, making it the second most commonly seized drug.

The CSEW estimates are based on face-to-face interviews in the 12-month period with 33,735 people aged 16 and over who were asked about their experiences of crime.

Figures from the ONS show cannabis, ecstasy, hallucinogens and amphetmines were most used in the lowest income bracket – people earning less than £10,400.

People earning more than £52,000 showed the highest proportion of cocaine and ketamine use. 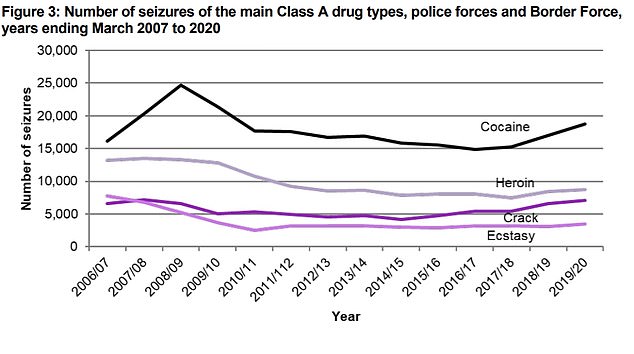 Cocaine remains the most common Class A drug to be seized, followed by heroin, the data published today shows. It comes as 3.4% of people from households earning £52,000 or more admitted taking cocaine in the last year

Some 19,230 adults aged 16 to 59 were asked about their use of drugs and household characteristics, according to ONS data.

Police forces carry out the majority of seizures (92%), with most tending to be smaller quantities of drugs from individuals while Border Force tend to seize much larger amounts, typically from trafficking for supply. 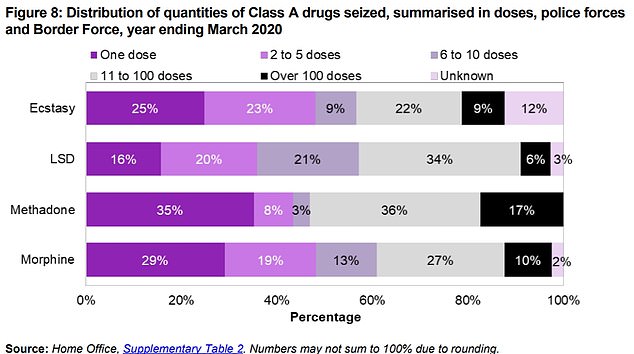 The majority of morphine and ecstasy seized is enough for just one dose, while officers are more likely to seize large quantities of LSD and the opioid methadone

Meanwhile, research for the Office for National Statistics (ONS) provided an insight into the social backgrounds of people who used drugs.

The proportion of cocaine users who were private renters was 4.2%, as opposed to those who owned their own home (2%) or lived in social housing (1.6%).

The findings also suggested that 17.6% of full-time students have taken cannabis, compared with 5.9% of managers and other professionals, and indicated that the highest proportion of cannabis users (13.2%) were earning a salary of less than £10,400 a year.

Police are responsible for the vast majority of seizures, with Border Force only seizing the majority of two drug types – the hallucinogenic LSD and anabolic steroids

There was no change in overall drug use and class A drug use in the year to March, the survey said, estimating that one in 11 adults aged 16 to 59 had taken a drug in the last year (9.4% – approximately 3.2 million people) – the same as the previous period.

Some 3.4% of adults aged 16 to 59 had taken a class A drug in the last year (approximately 1.1 million people), similar to the previous year, the research also indicated.