Top infectious disease experts are unconvinced about the merits of Melbourne's five-kilometre rule, arguing its health benefits must be more closely scrutinised against the great social and economic cost.

Some epidemiologists say good hygiene, face masks, strict social distancing, gathering outdoors instead of indoors, and paid sick leave for workers were far more effective in preventing transmission of coronavirus than restricting the distance people can travel from home. 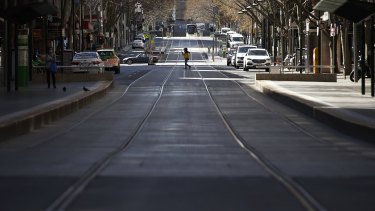 "It helps with policing, but the real question is how much does it really decrease transmission?" leading infectious diseases physician Professor Peter Collignon said.

But many questioned why the government had continued to impose a limit on how far Melburnians can venture from home.

When probed by reporters on Sunday, Mr Andrews repeatedly stated that it was too dangerous to lift the five-kilometre rule yet.

But with most of Victoria's new coronavirus cases linked to essential workers, including in aged care and at hospitals, Professor Collignon said the 5km-radius rule was increasingly futile.

"It’s like measles and german measles," he said of COVID-19. "We are not going to eliminate it or keep it eliminated. We have to have rules that make biological sense, but that don't restrict us so badly that we can’t function in any sort of life."

Deakin University epidemiologist Professor Catherine Bennett questioned why the state government was yet to use epidemiological modelling to test the effectiveness of its 5km rule.

Modelling released on Sunday, undertaken by the Burnet Institute, showed that a NSW-style set of restrictions would have resulted in a 41 per cent chance of a third wave within four weeks. While this helped guide moves to lift the curfew, it failed to closely examine the 5km rule, Professor Bennett said.

“It’s strange to me, why wouldn't you do modelling that examined the outcomes without a curfew and without a five kilometre rule?" Professor Bennett said.

“It seems to me the modelling is more about defending not opening up completely, but in fact, what you want is the more nuanced modelling that the Burnet Institute developed to be used to answer some of these questions using our own data.”

Adopting NSW’s restrictions on September 14 – when Melbourne’s stage four was originally due to end – would have brought an 86 per cent chance of a third wave, it found.

There are some exceptions to the 5km-rule under current restrictions, including those who are providing care, single people visiting a nominated person in another household, intimate partners, and people taking children to school and child care.

Under step three of the road map – subject to an average of fewer than five new daily cases over 14 days, and public health advice – the 5km rule would be lifted.

The earliest date the metropolitan region could have moved to step three was October 26 but that date has shifted to October 19, because the 14-day average has plummeted beyond initial expectations.

Professor Bennett said there was no clear evidence about how many transmission chains had extended beyond the five kilometre bubble.

There is no epidemiological rationale to say people within a heavily populated community must stay within five kilometres or 10 kilometres.

Mystery cases, where the source of the infections was unknown, had also dwindled down to one or two cases a day, hinting at low levels of community transmission. On Monday, there were no new mystery cases reported.

"We are talking about one case in every two to three million people," Professor Bennett said.

"There is no epidemiological rationale to say that people within a heavily populated community must stay within five kilometres or 10 kilometres for that matter. To my mind, it's now less about the epidemiology part of public health and more about managing people."

She noted the recent Hallam-Casey family outbreak, which has swelled to more than 40 infections, also did not appear to breach of the five kilometre rule and instead exploded by people gathering inside homes.

Strong messaging around the infectious nature of the virus had also instilled anxiety in Victorians about leaving their homes, she said.

Under Victoria's newly relaxed set of rules, the penalties will also be tougher, with hefty fines of almost $5000 in place for illegal gatherings.

"It’s true we don’t want another wave, but equally the individual risk is now so incredibly low you want to keep people doing right thing, but for right reasons," Professor Bennett said. "There is a big difference knowing it's incredibly important to stay home versus being too scared to leave your home."

"The fewer the cases, the less relevant it becomes," Professor Mathew said. “We are rapidly getting to the stage where the five kilometre rule could be dropped.”

When asked about whether Victoria should scrap the five kilometre rule before the next easing of restrictions in October, Professor Mathews said it was too difficult to evaluate its effectiveness without access to all the data.

"I am not in possession of all facts," Professor Mathews said. "But I do believe (deputy chief health officer) Professor Allen Cheng is doing a great job. If it his view we need to keep it for a little while longer then I trust that."