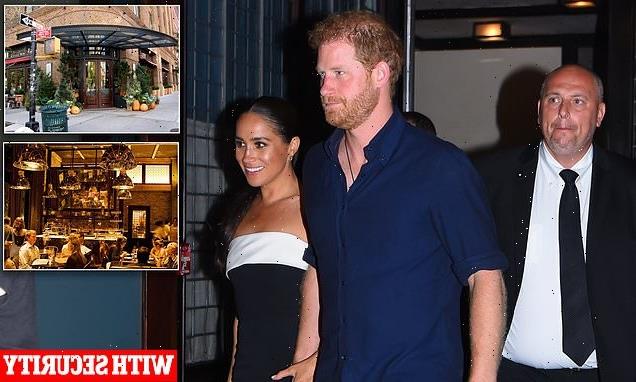 Center of attention! Meghan and Prince Harry were ‘seated in the middle’ of Robert De Niro’s NYC restaurant where other patrons were warned by security team that they’d be ‘asked to leave’ if they snapped pictures of them

Prince Harry and Meghan Markle were on display at the center of Robert De Niro’s Italian restaurant, where they mingled with diners despite alleged warnings that patrons would be kicked out if they snapped photos of the couple.

The Duke and Duchess of Sussex were spotted dining at the Locanda Verde restaurant, in New York City’s Tribeca neighborhood on Monday night.

‘There was lots and lots of security all throughout the restaurant, but they weren’t in [a] private room,’ a source told Page Six, saying that Harry and Meghan were ‘seated in the middle of the busy restaurant.’

The source added that the security detail warned that anyone trying to take a photo of the royal pair would be ‘asked to leave.’ 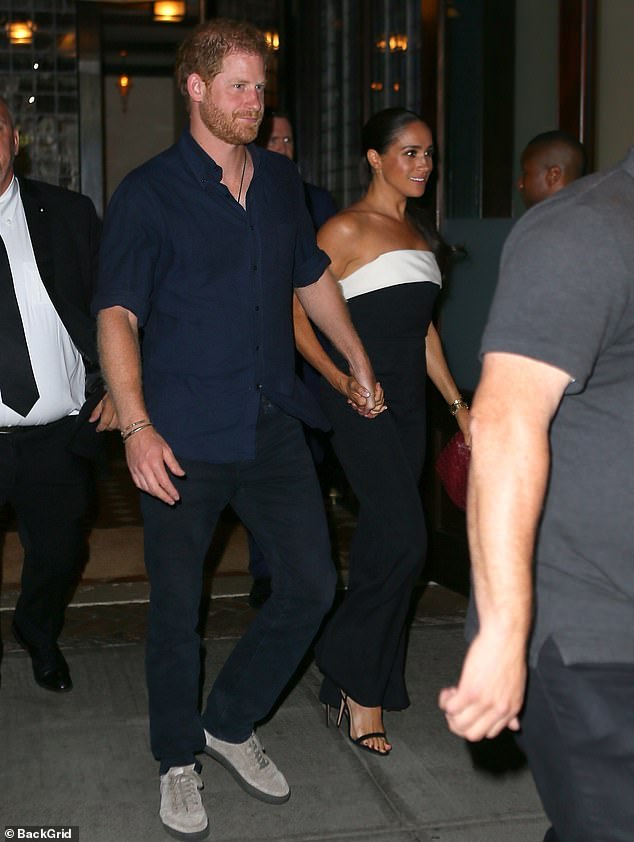 Prince Harry and Meghan Markle were the center of attention while dining out at Robert De Niro’s Locanda Verde restaurant, in New York City’s Tribeca neighborhood, on Monday night 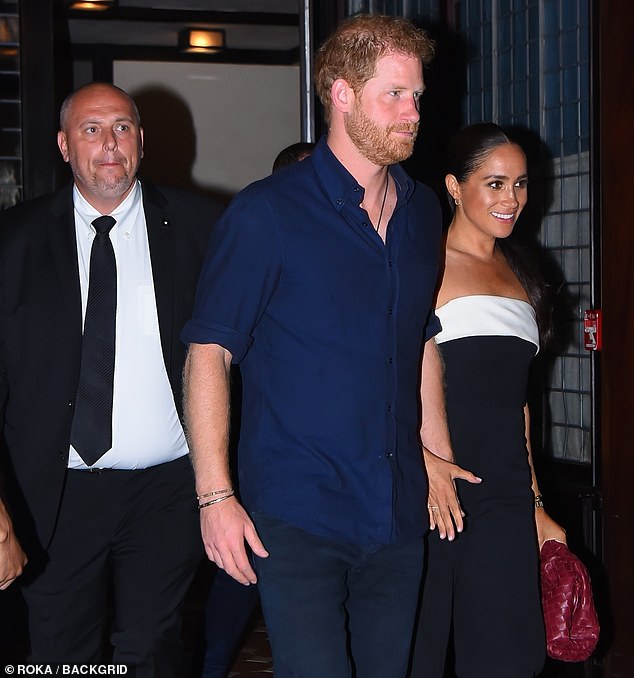 The Duke and Duchess of Sussex were reportedly quite social at the restaurant, wishing one diner a happy birthday and enjoying wine with another 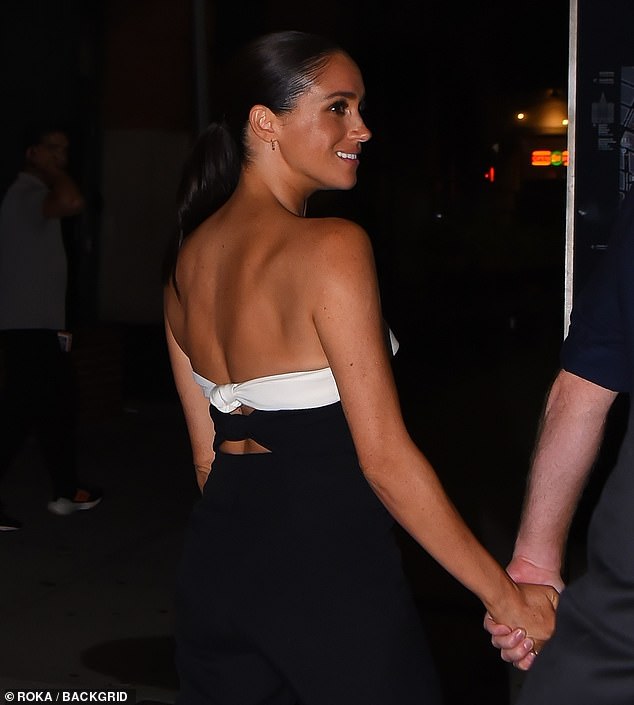 Meghan, 40, donned a black and white jumpsuit, black stilettos and a red clutch as she left the trendy ristorante as she held her husband’s hand 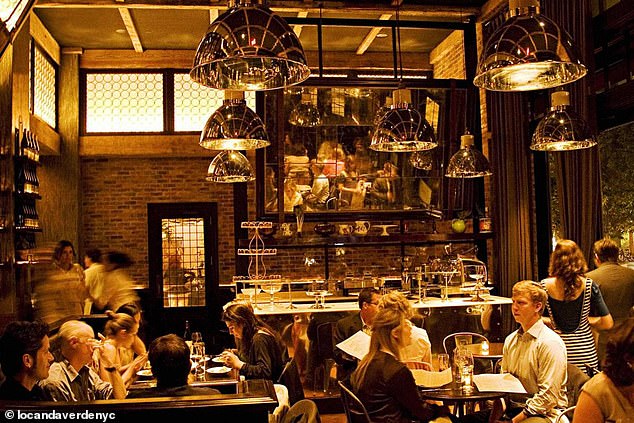 Despite the friendly reception, security for the royals had allegedly warned diners inside the restaurant to not take pictures of them or risk getting kicked out of the restaurant (pictured) 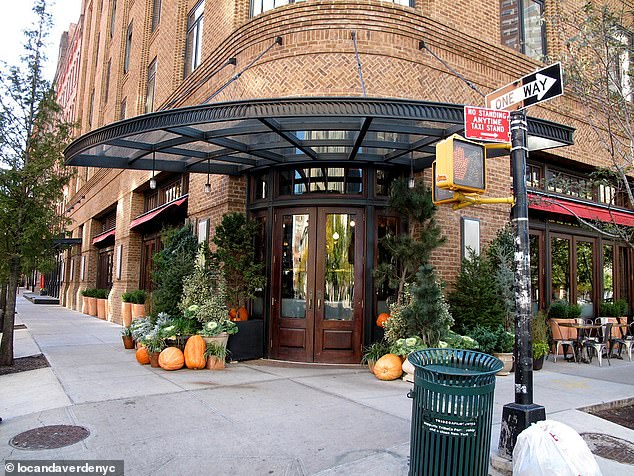 Despite the warning, the source said Harry and Meghan made the rounds at the restaurant, greeting and drinking with fellow patrons and wishing another a happy birthday.

‘They were all dumbfounded and just said, ‘Thank you so much.”

Another source confirmed the couple’s high spirits at the restaurant, adding that the royals enjoyed a meal of Sardinian sheep’s milk ricotta, steak tartare, Piemontese, ravioli, along with red wine.

Management for the restaurant did not immediately reply to DailyMail.com’s request for comment.

Meghan, 40, donned a black and white jumpsuit, black stilettos and a red clutch as she left the trendy ristorante – where one can easily run up a tab of $85 a person – holding her husband’s hand.

The Duchess of Sussex, in her third outfit of the day, accessorized with dainty gold earrings, her $350,000 trilogy engagement ring and wedding band, and Princess Diana’s $23,000 Cartier Tank Watch.

Harry sported a more casual look in black denim jeans, a navy blue shirt – with the arms rolled up – and grey suede sneakers. He also accessorized with two separate bracelets and a necklace which was mostly hidden by his shirt.

The Duke’s relaxed appearance was a stark contrast to his keynote speech at the UN General Assembly in which he blasted the US Supreme Court’s decision to overturn Roe v. Wade as a ‘global assault on democracy and freedom.’ 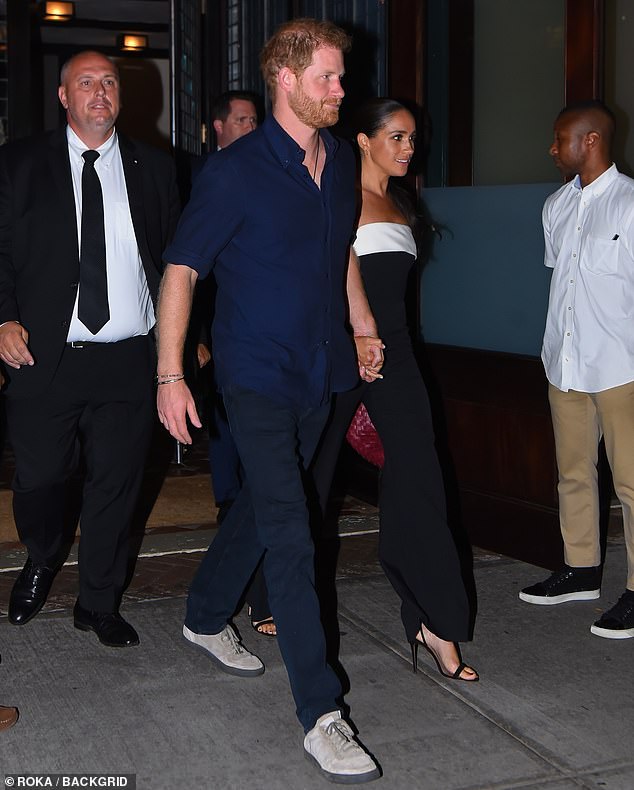 Pictured: Harry and Meghan exiting the trendy ristorante, where one can easily run up a tab of $85 a person, hand-in-hand 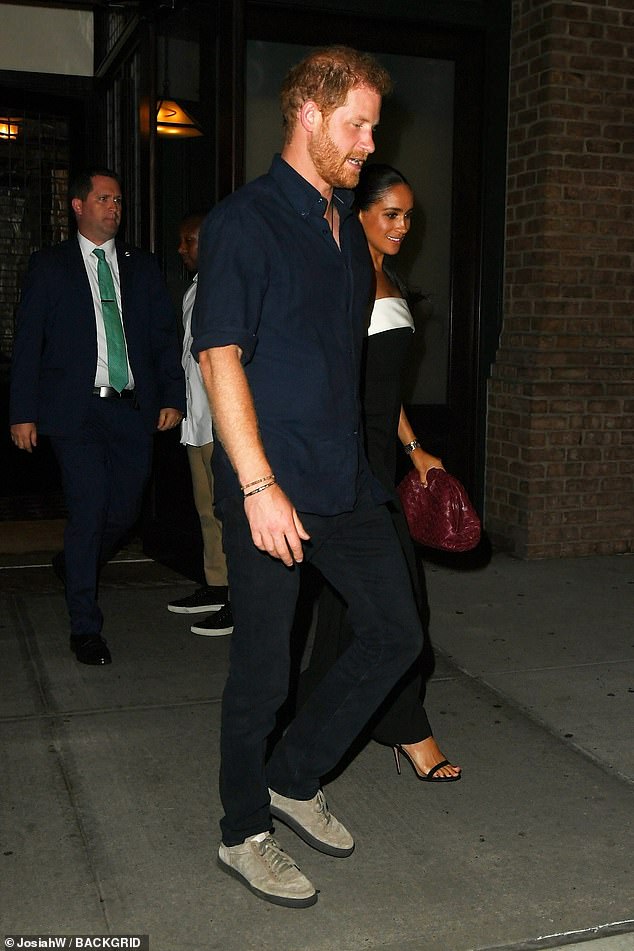 While there were allegedly no photos of them taken inside, the pair were greeted by a crowd of photographers once they stepped foot out of the restaurant 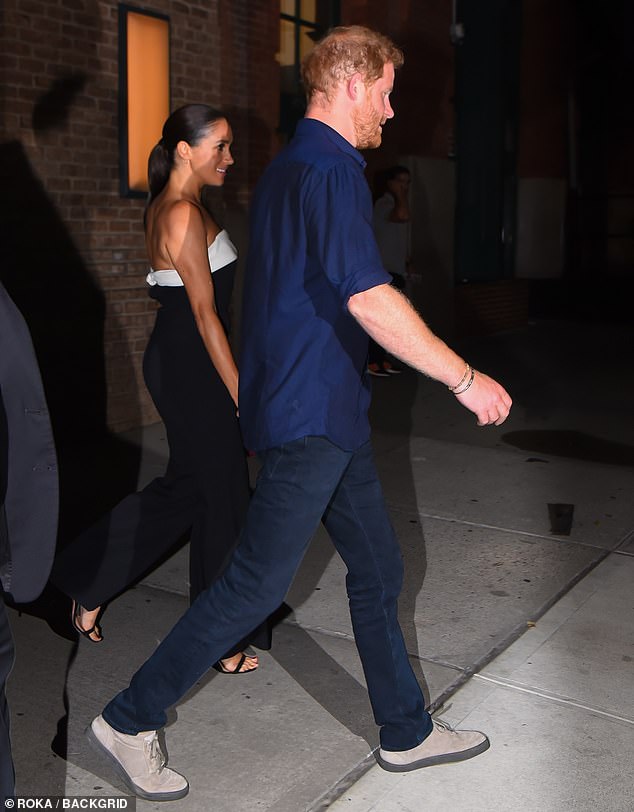 The outing came hours after Harry gave a politically charged speech at the UN, condemning the US Supreme Court’s decision to overturn Roe v. Wade

Despite the event being meant to be in celebration of Nelson Mandela Day, the Prince went ahead with his criticism of American politics.

He said: ‘This has been a painful year in a painful decade. We are living through a pandemic that continues to ravage communities in every corner of the globe.

‘Climate change wreaking havoc on our planet with most vulnerable suffering most of all. The few weaponizing lies and disinformation at the expense of the many.

‘And from the horrific war in Ukraine to the rolling back of constitutional rights in the US we are witnessing a global assault on democracy and freedom the cause of Mandela’s life.’

The comments, heard by a mostly-empty room at the United Nations on Monday morning, were the latest broadside at US politicians.

They followed recent remarks by Meghan to Vogue magazine in which she, alongside famous feminist icon Gloria Steinem, urged men to be ‘more vocal’ with their anger about the decision to overturn Roe.

Steinem, who was spotted with the Duchess earlier Monday, has recruited Meghan in her fight to get Congress to ratify the Equal Rights Amendment – a proposed amendment to the United States Constitution designed to guarantee equal legal rights for all American citizens regardless of sex. 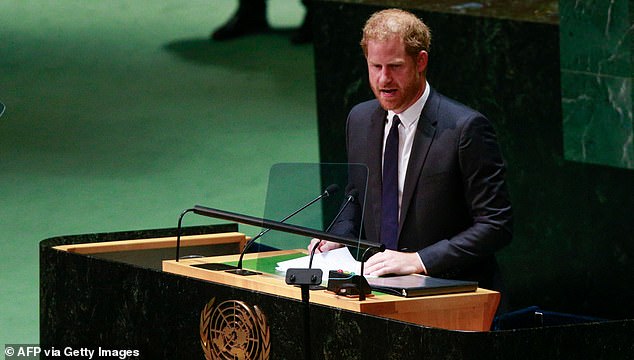 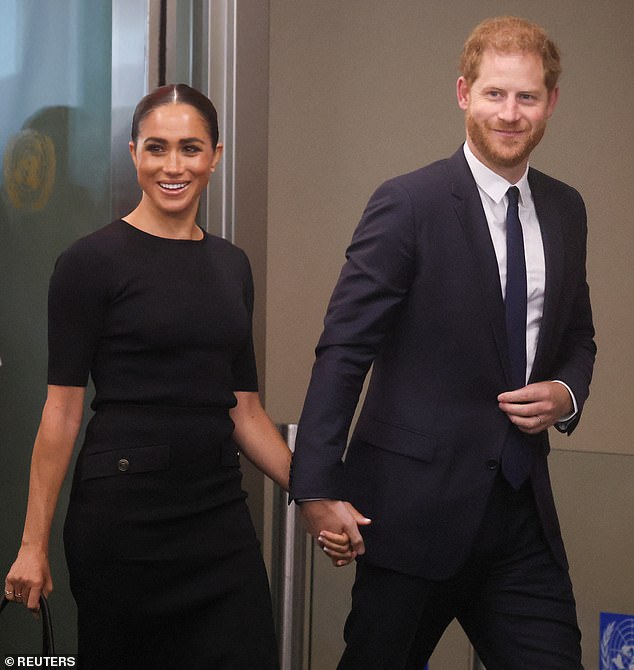 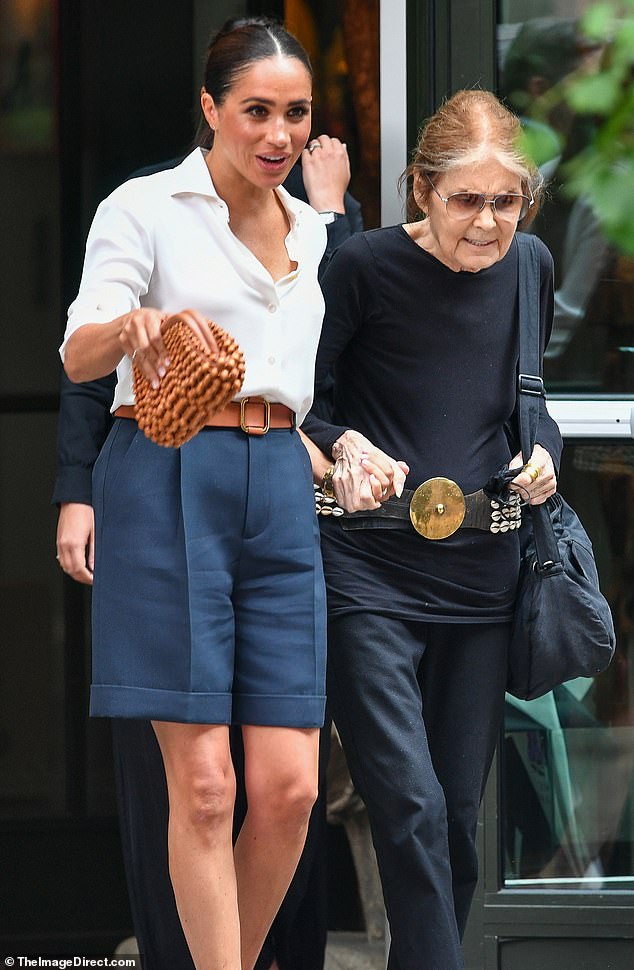 Meghan, 40, clutched the hand of her friend and fellow activist Gloria Steinem as they left Crosby Hotel after having lunch

Meghan and Steinem, 88, were interviewed by Vogue journalist Jessica Yellin just days after SCOTUS announced its decision to overturn Roe.

The Royal asked men to vocalize their anger and revealed her husband’s response to the ruling was ‘guttural.’

Steinem, who was approached by Meghan in 2020, when the Duchess realized that she was sheltering during the pandemic near their California home, said she could confirm that Harry was deeply interested in women’s rights.

She called the pair ‘chosen family’.

‘His reaction last week was guttural, like mine,’ Meghan said. ‘I know that for so many women right now, there is a sentiment of despair. But again, we have to band together and not wallow. We have to do the work.’

Meghan argued it was important to ‘normalize conversation about the things that affect our lives and bodies’, referencing her own decision to speak out in November 2020 about her own miscarriage.

‘This is about women’s physical safety,’ she said. ‘It’s also about economic justice, individual autonomy, and who we are as a society. Nobody should be forced to make a decision they do not want to make, or is unsafe, or puts their own life in jeopardy.’

Steinem also told Vogue that Meghan and Harry speaking out about the issue was vital.

‘It’s very, very, very important,’ she said. ‘Because what they both have is trust. We trust them and nothing but nothing replaces trust. It is the most important quality or attribute.

‘We can see things on television and not believe them or not trust them. But when people like these two tell us, then we trust it.’