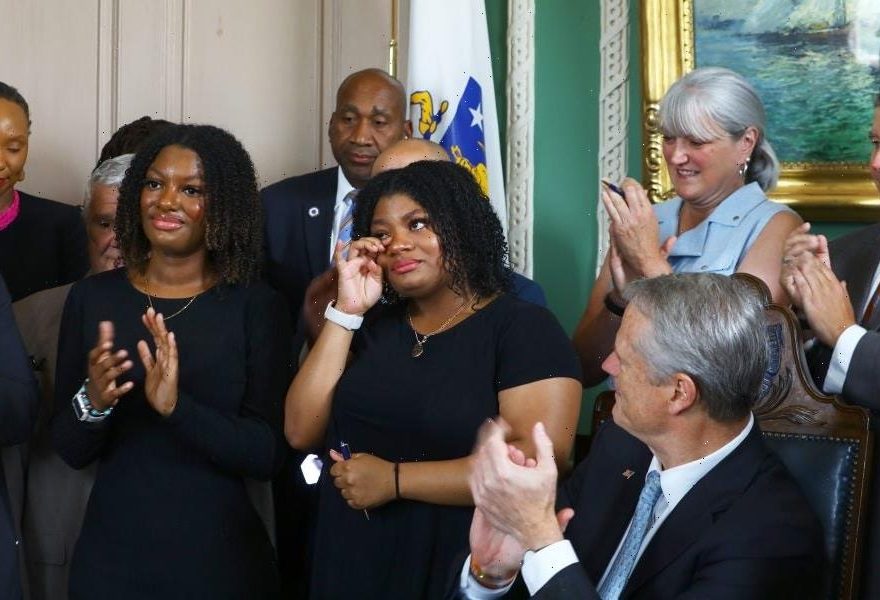 Massachusetts has become the 18th state to adopt a version of the CROWN Act.

On July 18 Governor Charlie Baker signed the bill into law which prohibits discrimination based on hairstyles.

In 2017, the issue of hair discrimination came to light in the northern state when then-15-year-old twin Black girls, Deanna and Mya Cook were allegedly penalized at school for wearing hair extensions while their white counterparts were not ridiculed for violating hair protocols.

Mya said, “It feels amazing to know that we’ve changed so many lives.”

Deanna spent time reminiscing and said, “It really took me back to that first time when I got my detention. I was thinking about how hard this would be. Knowing no one will go through that again, it means the world, it really does.”

According to CNN, Chynah Tyler, state representative and Chairwoman of the Massachusetts Black and Latino Caucus attended the signing and told the Cook sisters, “I came in this building very young and it’s very difficult being young, but you are brave and just know that your identity matters to us.”

The CROWN Act which stands for “Create a Respectful and Open World for Natural Hair” was created in 2019 by Dove, the Crown Coalition, and then-Senator Holly J. Mitchell (D-CA). The initiative intended “to ensure protection against discrimination based on race-based hairstyles by extending statutory protection to hair texture and protective styles such as braids, locs, twists, and knots in the workplace and public schools.”

In 2019 California became the first state to adopt the bill and according to the StarTribune, at least 44 other states have either signed or thought about signing a version of the CROWN Act into law.

On March 18, the US House of Representatives passed the CROWN Act, however it has yet to pass in the Senate. If the bill is passed in the Senate and is signed into law, every state will be governed by the federal statute.