Tunnel of love: Bricklayer who built secret passageway between his home and married lover’s house is busted by her husband

A married bricklayer from Mexico built an underground tunnel between his home and that of his neighbor so they could carry on a secret affair.

The construction worker – named in local media only as Alberto – built a passageway that allowed him to visit a woman named Pamela at her residence in the Tijuana neighborhood of Villas del Prado 1 while her husband was at his security job.

The pair had managed to get away with the affair, until one day husband Jorge  arrived home from work earlier than usual and caught them in the act.

Jorge first checked under his bedroom’s bed and did not find Alberto, and then spotted him hiding behind a couch before he disappeared.

The cheated husband then discovered a hole near the couch that led into a tunnel beneath his house.

A married bricklayer built a secret tunnel that connected his home with the house of his married neighbor in the Villas del Prado neighborhood of Tijuana, Mexico 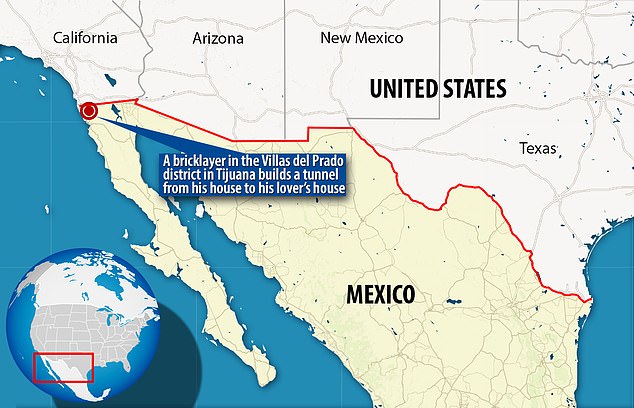 Jorge climbed down to the passageway and followed it all the way to Alberto’s home.

Local media did not report how long the tunnel was, but pictures of the entrance appear to show the bricklayer had done a professional-looking job.

Alberto reportedly pleaded with Jorge to leave because he was trying to hide the affair from his wife, who was sleeping at the time.

However, an angry Jorge spilled the news about their spouses’ affair, and the men got into a fist fight.

Cops responding to the brawl took Alberto away to prevent the confrontation from escalating further.