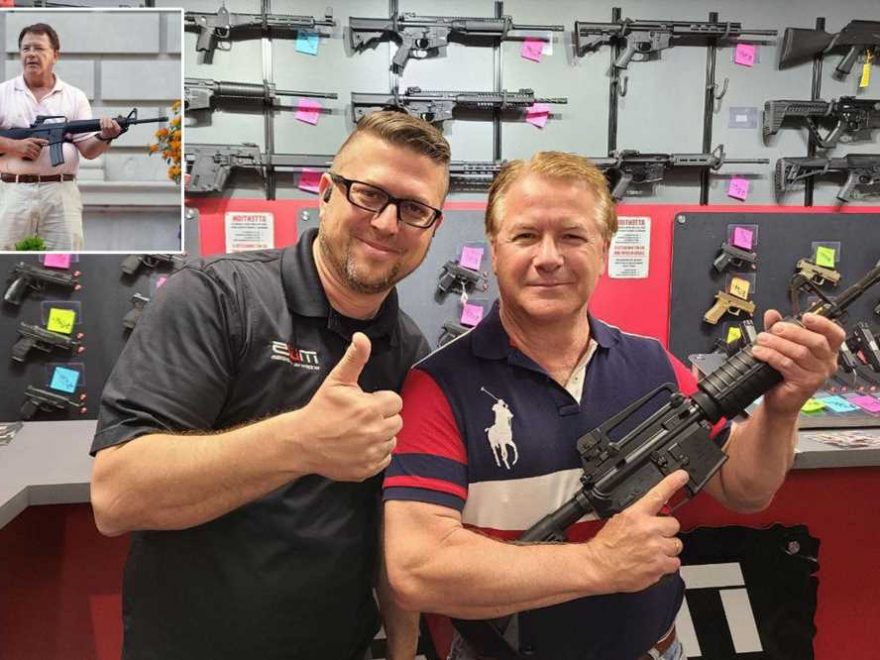 The story behind Juneteenth, one of America’s oldest holidays

The gun-toting St. Louis lawyer who pleaded guilty to pulling a gun on Black Lives Matter protesters is flaunting his new rifle.

Mark McCloskey picked up a brand new AR-15-style gun — after surrendering his old one last week as part of a plea deal with prosecutors.

“Checking out my new AR!” the controversial attorney, who is running for Senate, boasted on Twitter in two photos, one with his wife Patricia, giving the thumbs up inside a gun store.

McCloskey is seen smiling with the weapon in front of a wall of semi-automatic rifles.

The gun-loving lawyer pleaded guilty to fourth-degree assault and was ordered to pay a $750 fine surrender the rifle he pointed at protesters outside his home on June 28.

His wife, who hoisted a handgun in the high-profile encounter, copped a plea to harassment and agreed to pay a $2,000 fine to settle her part of the case.

A defiant Mark McCloskey told reporters outside the courthouse, “I’d do it again.”

“Any time the mob approaches me, I’ll do what I can to put them in imminent threat of physical injury because that’s what kept them from destroying my house and family.”

The McCloskeys made headlines when hundreds of marchers walked through a gate onto a private road and past the couple’s mansion.

The pair said they felt threatened and armed themselves, standing on their front lawn while the demonstrators passed — and jawed at the couple.

The incident ended without anyone getting hurt.