Was Adam Goodes right to reject his hall of fame invitation?

When news surfaced that the dual Brownlow medallist declined the AFL’s invitation to be admitted into the hall of fame, strong emotions came to the surface. Football writers Jake Niall, Andrew Wu and Daniel Cherny examined what was behind Goodes’ decision. Many readers, sad and angry about his treatment on and off the ground, backed his call and congratulated him on his stellar playing career. Others required more time to accept the decision of the Swan’s two-time premiership-winning player. 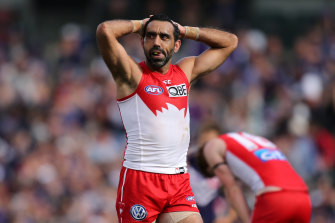 Adam Goodes was repeatedly vilified by some AFL fans towards the end of his playing career.Credit:Getty Images

Mal: “Non-Indigenous Australians still have much to learn. Adam Goodes is helping to open our minds and our hearts so we may learn. A true leader and champion.”

Matthew: “Well – good on him – AFL were glacial to recognise this for what it was – what a fantastic player he was.”

Ashley Sevior: “An absolute tragedy that a man who was one of our greatest athletes had his love of the game stolen from him by racist vitriol and worse, attempted justification of that racism … and even worse, a failure by his sport to stick up for him. Adam Goodes deserves far better.”

wynwoman: “There are many reasons to feel ashamed about being Australian at the moment and the treatment of Adam Goodes is way up there. As well as being an extraordinary sportsman and role model, he is clearly a man of principle and grace. Had he accepted being inducted into the Hall of Fame the AFL, who did nothing to support him during that period, would consider the incident done and dusted and would continue on not having done anything to influence the behaviour of the so-called fans and elements of the media.”

m66murphy: “Unfortunate and sad but each to their own and Goodes obviously has his reasons, so all that is left to do is respect his decision.”

HJ: “Much of the crowd antagonism towards Goodes was because he was so good and only a few bogans stooped to racist taunts and he should accept the Hall of Fame honour with pride for his achievements.”

Billy: “Accept the award with grace.”

bailup: “Billy, he declined the award with grace, what more do you want from him?“

Greyish Ghost: “The hall of fame should simply leave one of this year’s spots ‘open’; Adam’s for when he wants it.” 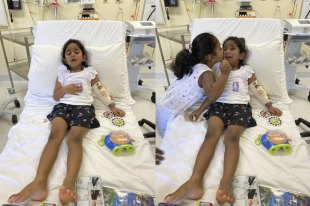 Tharnicaa and her sister Kopika in hospital on Christmas Island on June 6.

Annabobanna: “How about letting them return home to the only home these girls have known. Regional and remote communities desperately need people and here is a family who belongs to such a community, is contributing to local employment and has local ties. Instead they are to be sent somewhere where this young family has to start all over again … for what?!?!”

John Henry: “A disgraceful country – not just the govt; people voted for such measures and still support them. A pathetic, insular, selfish and self-absorbed mob bereft of any moral compass. Borne out during the pandemic as well.”

as you like it: “I have written to Minister Andrews and Prime Minister Morrison this morning as suggested by one reader. I feel better having done so and the more who do, the better.”

Seamus: “It’s now time for Labor to differentiate themselves from this LNP crowd. Let’s see it Anthony.”

Alison Grace: “Just send them back to Queensland, there are far more urgent priorities and it’s costing us a bomb. Some empathy and common sense would greatly benefit this government.”

Ruth Melbourne: “The Libs want them out of sight now, too embarrassing even for the right wing politick!”

Yatoya: “There is always an exemption to the rule. Even criminals can be pardoned. Keeping a family with little children in isolation for over three years is pure cruelty. Not to mention the cost. How ridiculous to spend all the millions of dollars on reopening the detention centre for one good family, instead of opening a homeless shelter in Sydney (more and more homeless people in the streets.) Let the family go home to Queensland!”

Sisyphus: “Australia needs to stay firm on this issue. We have seen – both here and in the US recently – that relaxing the rules opens up a rush of people smuggling and people dying in the process. No-one wants to see that happen.”

Paddy: “Australia is the lucky country. And everyone wants to live here. Unfortunately they cannot. There are rules to be followed and if you make exceptions, it is unfair to all those others who are waiting in line for their turn.”

KET: “This is one of those moments when I burn with shame being an Australian citizen. I hope that this family are taken in with open arms by the US or New Zealand. Shame on the Australian government for their deplorable actions with this family.”

Plant-based milks: which is best?

The sheer volume of milks on offer in supermarkets these days can be overwhelming. Deputy lifestyle editor Sophie Aubrey set out to help readers choose what’s best for them – and the planet. While some readers debated the nutritional, environmental and moral benefits, for others the taste is all that matters. But when it comes to plant-based products, is “milk” what we’re really discussing? Some readers railed against what they saw as the misappropriation of the word. 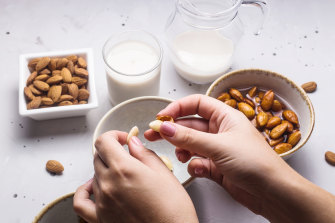 For some readers the taste of the milk was all that mattered.Credit:iStock

coljones: “The river system was designed by God to distribute water for his grand plan. Irrigation perverts this and the vast acreages devoted to almonds, rice (and cotton) leads to unsustainable downstream water loss in this wide brown land.”

I hate lying politicians: “We should not be planting or making almond milk in the Riverina if 70 LITRES of water is used to make one almond kernel. This should only be done where rainfall is abundant – like FNQ.”

SKP: “Amazed not to find a single mention here of the cost to the cow – surely the animal at the centre of the debate on milk deserves a mention and the sad fact that they are made to be perpetually lactating mothers whose babies are taken away from them and disposed of in slaughter houses as a waste product, that they live only a half to third of their natural lifespan before they too are sent to slaughter. This is hands-down surely the best case for plant-based milk.”

Marcel Kimpton: “So that takes care of the science and environmental side of the discussion. What about taste? Doesn’t that count for something? To me, the nicest drink out of all those candidates is coconut. The others I find are all a chore to drink.”

World’sGreatestCat: “Nothing about macadamia milk. Would have been interesting, given Australia’s production of this nut.”

Jackson B: “None of these taste as good as full cream real milk.“

Mark: “I hit the big 60 this year. When I went to a public infants and primary school we were given a small bottle of cold milk every morning. There was half an inch of thick cream on the top, beautiful. I cannot remember children being allergic to certain foods as much as they are now, nor were there so many syndromes that children have nowadays – maybe they were not known about but you can’t beat cows milk in my opinion.“

Oz: “Unless plants have magically grown mammary glands there is absolutely no such thing as plant-based milk! If you have to give a substance a false name and add supplements to overcome its health deficiencies then why bother?”

canoath: “C’mon folks. If you don’t like the term milk then offer an alternative please. There are other terms for the dairy version already out there. Ever heard the Yanks asking for ‘cream’ in their coffee? They mean milk. Good article by the way.”

Exponential: “Plant-based milk has another name – ‘juice’. ‘Almond juice’. ‘Soy juice’. ‘Milk’ can only come from an animal.”

KevinMallone119: “In a world full of issues worth fighting for, the comments section is loaded (so far) with people angry and/or annoyed that the word ‘milk’ has somehow been misappropriated. Bravo.”

Online readers of The Sydney Morning Herald and The Age made 50,010 comments on 584 stories in the past week.

Most-read by subscribers in the past week