A 32-year-old man has been arrested in connection with the shooting of a woman in Docklands earlier this month, after a lengthy stand-off with police.

Police launched a manhunt for Ricky Brockdorff on Monday. 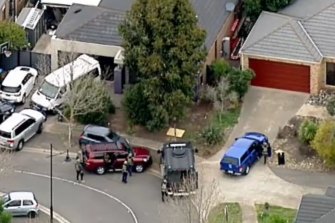 Screengrabs from Nine showing the arrest of Ricky Brockdorff at a home in Point Cook on Tuesday.Credit:Nine News

Police were appealing for the public’s assistance to find him after a 25-year-old woman was shot outside an apartment complex on Rakaia Way at Docklands in the early hours of July 17.

Officers located Mr Brockdorff on Tuesday at a home on Lemongrass Circuit at Point Cook. A lengthy negotiation followed, and nearby streets were closed off.

Just before 2pm, and with the help of heavily armed officers from the special operations group, police arrested Mr Brockdorff and took him into custody.

Police said his arrest followed an “incident” in Point Cook on Tuesday.

“Detectives from the armed crime squad yesterday issued an appeal for information on Brockdorff’s whereabouts as part of their investigation into the shooting of a woman in Docklands on [July 17],” Victoria Police said in a statement.

A Hoppers Crossing woman, 25, was taken to hospital with serious injuries following the incident on July 17 and remains in a serious condition.

Mr Brockdorff is expected to be charged with attempted murder, firearm offences, and a range of other offences, police said.