Malaysia may have a third prime minister in just seven months, with veteran politician Anwar Ibrahim anxiously awaiting an audience with the country's king to form government.

Anwar, who has sought the country's top political job for more than 20 years, claimed on Wednesday to have secured the support of a strong majority of MPs – including defectors from the Perikatan Nasional (National Alliance) government. 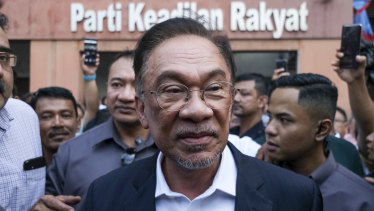 Anwar Ibrahim is the founder and president of the People’s Justice Party.Credit:Bloomberg

But he declined to name which MPs were prepared to switch support to his Pakatan Harapan coalition, which ruled the country until late February under former prime minister Mahathir Mohamad. It currently controls 91 seats.

A majority in the lower house of the parliament is 112 MPs and the current government of Prime Minister Muhyiddin Yassin, who was a senior member of the previous government alongside Anwar and Mahathir, holds 113 seats.

Anwar said he had secured a solid and convincing majority of MPs and that "as of this moment, the government of Muhyiddin Yassin has fallen". 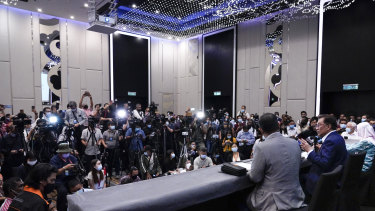 Anwar Ibrahim (second from right) said he has secured a majority in Parliament to form a “strong, stable and formidable” government.Credit:AP

But a scheduled audience with King Abdullah Sultan Ahmad Shah on Tuesday was delayed as the king is ill and in hospital and a date has not yet been set for the pair to meet and for Anwar to demonstrate he has a majority.

In that vacuum, Muhyiddin and his allies have dismissed Anwar's claims and uncertainty about a change of leadership is growing.

Professor James Chin, from the University of Tasmania's Asia Institute, said Anwar would be scrambling to keep his expanded political support base over the coming days and that he "will try very hard to see the king" as soon as possible.

"The king has two options – he can call a snap election and dissolve parliament or if he believes Anwar, he can swear him in on the spot," he said. 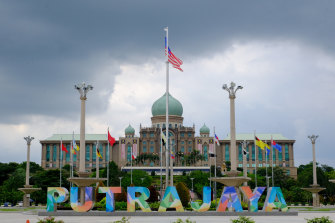 The Malaysia flag flies near the Perdana Putra, the office complex of the Prime Minister of Malaysia, in Putrajaya, Malaysia.Credit:Bloomberg

"At the present moment my calculation is that Anwar has 110 to 120 votes but I put a caveat on that as this is based on statutory declarations [of a switch support to Anwar] that can’t be legally enforced."

Chin also pointed out that Anwar had made overtures to Muhyiddin to stand aside from the prime ministership, offering him a senior role in a new Pakatan Harapan government.

Allies of Anwar say the reform-minded leader is likely to see the king in the coming days, though most likely after a state election is held in Sabah over the weekend, and that they do not believe the king would want to hold a national election during a global pandemic.

Malaysian political analyst Kean Wong expressed scepticism that Anwar had finally secured the numbers to become prime minister, a role he has sought since the late 1990s when he was deputy prime minister to Mahathir.

"I think that an election is the likeliest scenario right now," Wong said. 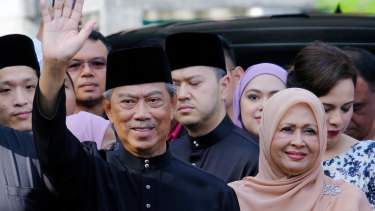 To secure the minimum 112 seats Anwar needs some MPs from the United Malays National Organisation (UMNO), which is part of the National Alliance, to defect.

UMNO president Ahmad Zahid Hamidi said on Wednesday that "many" MPs from the party would support Anwar becoming prime minister.

That bloc could number 15 MPs potentially triggering other parties such as the eastern Malaysian parties GPS and Warisan to join the coalitionand deliver the majority Anwar seeks.

Wong, the analyst, said it was even possible "that UMNO is playing Anwar to bring on an election".

If a poll was called, UMNO – which ruled the country for more than six decades until May 2018 – would be well placed to take back power while in alliance with the Islamist PAS.

The Prime Minister urged people to reject moves to destabilise the country.

"I urge the people to reject the rash actions of some politicians who deliberately want to disrupt the political stability and the country's economic recovery plan," Muhyiddin said in a speech while announcing additional coronavirus stimulus measures.