Lord Frost today insisted Boris Johnson is the ‘right man to take the country forward’ following his bombshell resignation from the Cabinet on Saturday.

The peer quit as Brexit minister with ‘immediate effect’, having previously agreed with the premier that he would leave his job in January.

Lord Frost cited concerns about ‘the current direction of travel’ of the Government as well as fears over ‘coercive’ Covid measures.

This morning he stressed his decision to walkaway was ‘absolutely not about leadership’ as he gave his full backing to Mr Johnson.

However, he refused to be drawn on whether more ministers could quit the Cabinet if Mr Johnson decides to impose further coronavirus restrictions. 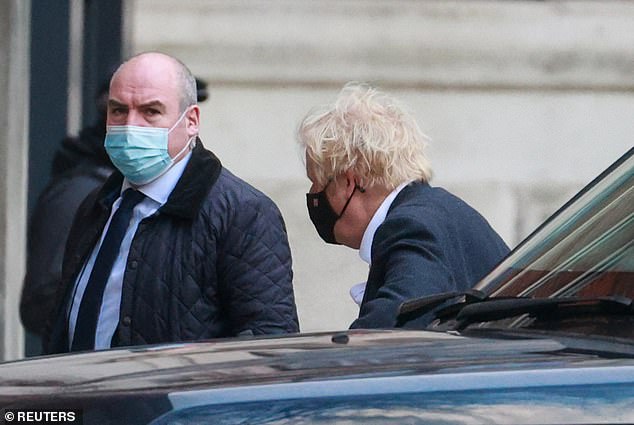 Lord Frost today insisted Boris Johnson is the ‘right man to take the country forward’ following his bombshell resignation from the Cabinet on Saturday. The Prime Minister is pictured outside 10 Downing Street this morning

Foreign Secretary Liz Truss has been handed responsibility for leading Brexit talks with the EU amid a long-standing dispute over border rules in Northern Ireland.

Lord Frost’s departure was described as a ‘watershed moment’ for Mr Johnson following an extremely damaging week for the Prime Minister.

Lord Frost told Sky News this morning that he and Mr Johnson were aligned on Brexit issues but disagreed on wider Government policy.

He said: ‘We have never disagreed in any way about Brexit policy, right up to the last day we have been absolutely aligned on that and Liz Truss and Chris Heaton-Harris I am sure are going to do a great job.

Asked if he believed it is time for the PM to be replaced, Lord Frost said: ‘This is absolutely not about leadership, this is about policy differences.

‘I am absolutely confident this country has got a great future under Boris Johnson’s leadership if we can get the policies right.’

He added: ‘The departure was intended to be in the New Year and has come out earlier than we thought.

Lord Frost was asked if he believed more ministers will quit the Cabinet if the PM introduces more Covid curbs in the coming weeks.

He replied: ‘I can’t speak for anybody else, I can only say what I think which is that I don’t support coercive policies on Covid.

‘The Prime Minister has got some very difficult decisions to take and I am sure he will be thinking very hard of them.’