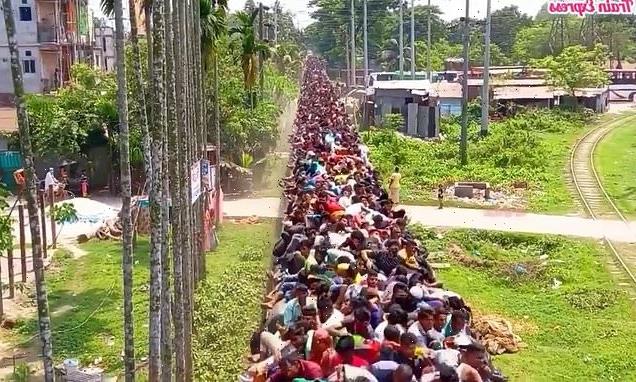 And you thought YOUR commute was bad! Extraordinary scenes as thousands pack onto the world’s busiest train… and they were coming back from holidays

Astonishing footage has emerged of a completely packed train moving through Bangladesh as thousands return from celebrating the Eid holiday.

There wasn’t one free place to sit on the train, with travellers seen clinging onto the front, sides and roof of the carriages.

The train stretched several hundred metres with countless passengers seen lying and sitting on the roof – with some even waving happily to passers by. 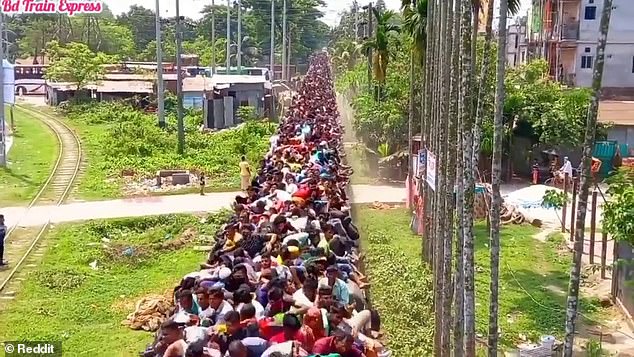 The footage has circulated online, shocking many around the world whose idea of a packed train is worlds away from what was seen in the south Asian country.

‘So if the train has a terrible accident, how many people are injured? Like 5,000?’ one person commented on Reddit.

‘Can’t imagine living in that environment,’ a second person added.

Another said ‘I can’t fathom how this is even a thing.’

One pointed out that this is like ‘everyday stuff’ for those who come to Dhaka (the capital city) for work.

‘Any holiday like Eid means basically all the main roads of Dhaka blocked. You can’t even go anywhere,’ they said.

Eid al-Fitr is the earlier of the two official holidays celebrated within Islam. 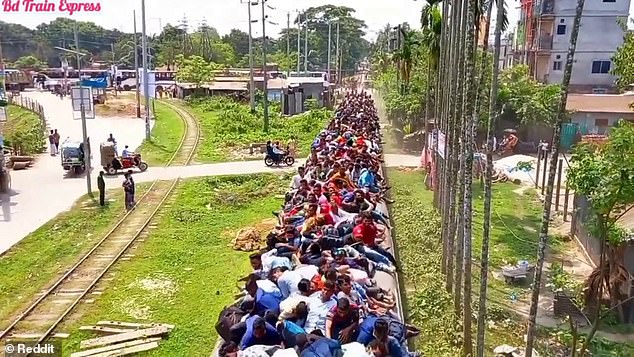 There wasn’t one free place to sit on the train, with travellers seen clinging onto the front, sides and roof of the carriages

The religious holiday is celebrated by Muslims worldwide because it marks the end of the month-long dawn-to-sunset fasting of Ramadan.

The footage is a stark contrast to what’s seen in Australia’s train network system, where passenger safety is the number one priority.

Aussie passengers are encouraged to remain seated when the train is moving, with those who can’t sit down told to hold onto handles hanging from the ceiling.

If a carriage is full, passengers waiting to board will have to hang around for the next train to avoid overcrowding.

RULES WHEN ABOARD TRAINS IN AUSTRALIA