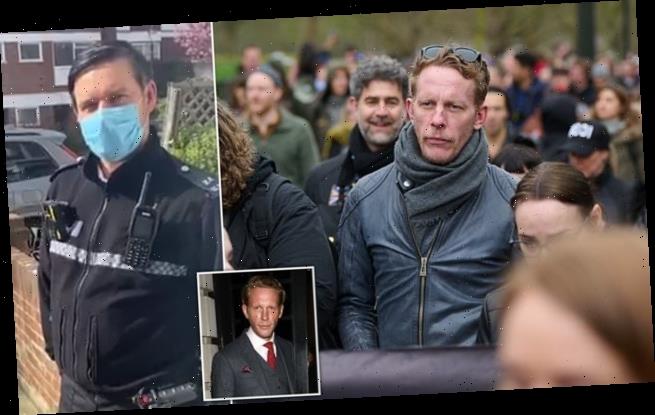 Laurence Fox, the actor who is running as the anti-lockdown candidate for London Mayor, is taking legal advice after police warned him his campaigning may be ‘breaking Covid rules’, MailOnline can reveal.

The star of ITV series Lewis has hit out at Scotland Yard after two Metropolitan Police officers confronted him on his doorstep in Lambeth, south London yesterday and told him to be mindful of current lockdown laws.

In a video of the exchange shared by Mr Fox on Twitter, the police said he had been reported for breaking rules while campaigning. However, they admitted that they had ‘no evidence per se’ to support the complaint.

Mr Fox, who launched the anti-woke Reclaim party to fight the ‘culture wars’ slammed the Met’s ‘mild intimidation’ and has revealed he is taking legal advice.

Speaking exclusively to MailOnline, the actor accused the force of investigating a ‘non-crime’ and said he has ‘lots of questions’ for Scotland Yard.

‘I actually felt quite sorry for the police officer I filmed,’ Mr Fox told this publication. ‘He clearly didn’t know why he was there. No one did.

‘The police have been put in an impossible position, enforcing these sorts of rules and investigating non-crimes reported by anonymous snitches.

‘I am in the process of consulting legal advice on the incident. We have lots of questions for the Met over what happened and why.’

Mr Fox called the incident ‘a very worrying thing in a democratic society’. He added: ‘We do not live in North Korea or China. We live in Great Britain.’ 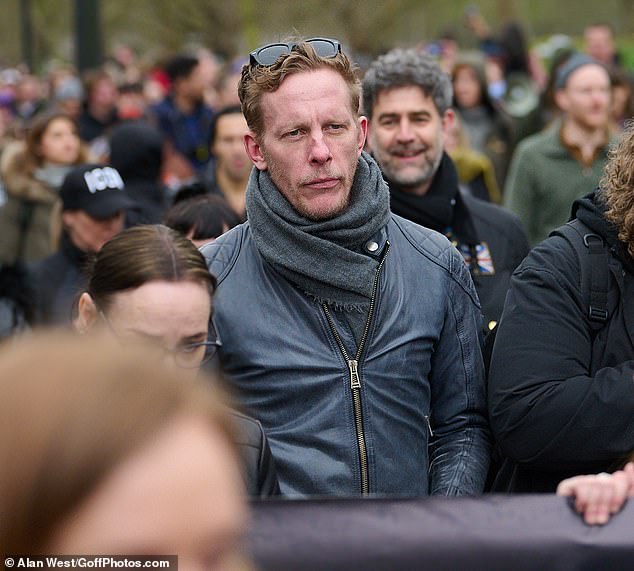 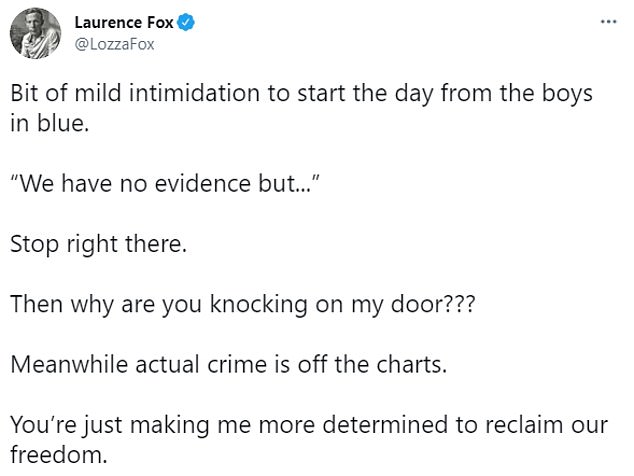 Mr Fox captioned the post: ‘Bit of mild intimidation to start the day from the boys in blue’ 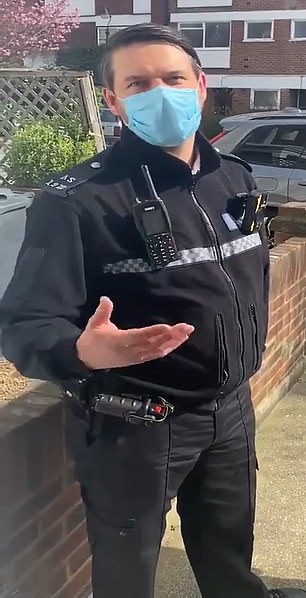 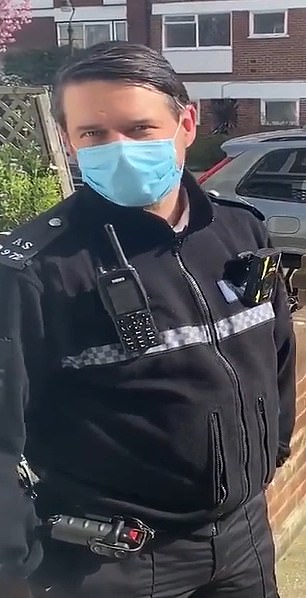 The actor was dropped by his agent after he defended the British Press against charges of racism against Meghan Markle on Question Time last year.

‘I’m quite used to being intimidated, but that’s not my concern,’ he said. ‘I don’t want anybody in London or the UK to be investigated for non-crimes.’

A spokesperson for the Met said: ‘On Wednesday, 24 March a report was made to the Met alleging a breach of Covid regulations by an individual.

‘As a result of the information, at about 11:30hrs that same day officers attended an address in Lambeth, SW8. Officers spoke to a man at the location and gave advice about the Covid regulations. No offences were disclosed.’

In a video filmed by Mr Fox and uploaded to Twitter yesterday, police told the former actor that he was reported for ‘breaking Covid rules’ while campaigning to be Mayor of London – but said they had no ‘evidence of that per se’.

The officer explained that while door-to-door leafleting was allowed after the lockdown rules relaxed on March 8, Mr Fox was reportedly ‘meeting big groups in London and running your campaign that way’.

But Mr Fox hit back, saying the officer shouldn’t have turned up if he didn’t have evidence, especially while ‘actual crime is off the charts’. 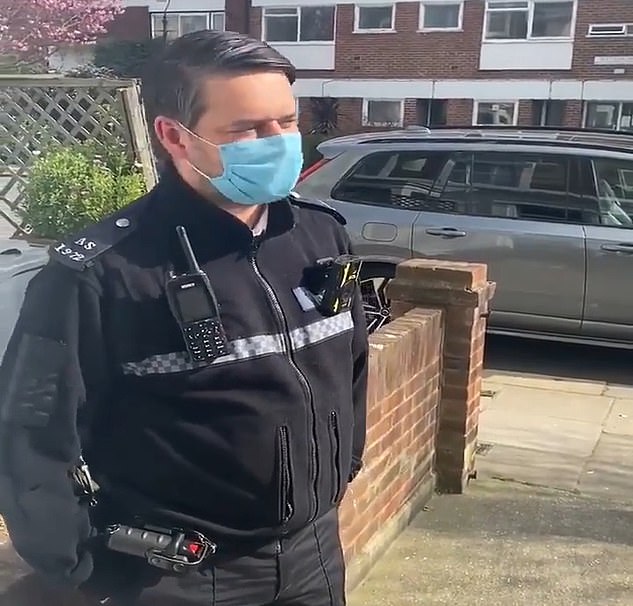 In the clip, one of the officers says: ‘We’ve just had a report basically of someone reporting you to us about breaking Covid rules about your campaigning for the Mayoral election’ 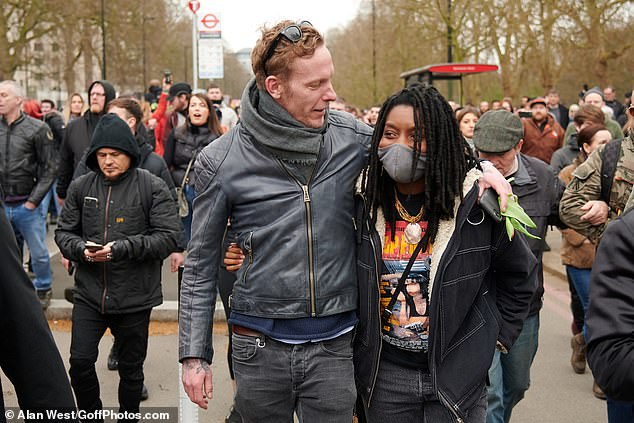 Mr Fox is seen attending an anti-lockdown rally in Hyde Park, London on March 20, 2021. The actor is fighting to become the next mayor of London

He captioned the post: ‘Bit of mild intimidation to start the day from the boys in blue. ”We have no evidence but…’ Stop right there.

‘Then why are you knocking on my door? Meanwhile actual crime is off the charts. You’re just making me more determined to reclaim our freedom.’

Earlier this month, Mr Fox announced his bid to stand against Sadiq Khan in the mayoral elections on May 6. He will campaign to end lockdown that same month.

Currently, the last remaining lockdown rules in England are set to be lifted by June 21 under Boris Johnson’s roadmap out, but this is subject to change.

Mr Fox’s views on lifting lockdown come in stark contrast to that of Mr Khan, who previously urged the Prime Minister to ignore ‘shouting and hectoring’ from Tory backbenchers and reject calls for a swift easing of national curbs.

In the clip, one of the police officers tells Mr Fox: ‘We’ve just had a report basically of somebody reporting you to us about breaking Covid rules about your campaigning for the Mayoral election.

‘Apparently, he’s saying that the rules were relaxed on March 8 for door-to-door canvassing but you’ve been apparently meeting big groups in London and running your campaign that way.

‘We haven’t got any evidence of that per se at the moment but we wanted to sort of let you know to be mindful about what is being reported.

‘What you’re doing is obviously quite in the headlines at the moment. And yeah sort of just to let you know that it has been reported and just to sort of be mindful that the rules are changing on a fairly regular basis and to sort of keep yourself up to date with what is the current rule before you do anything, go out and meet anybody.’

Announcing his bid for London Mayor this month, Mr Fox told The Telegraph: ‘I am standing for London Mayor. With almost all older and vulnerable people having got their jab, I want the lockdown lifted straight away.’ 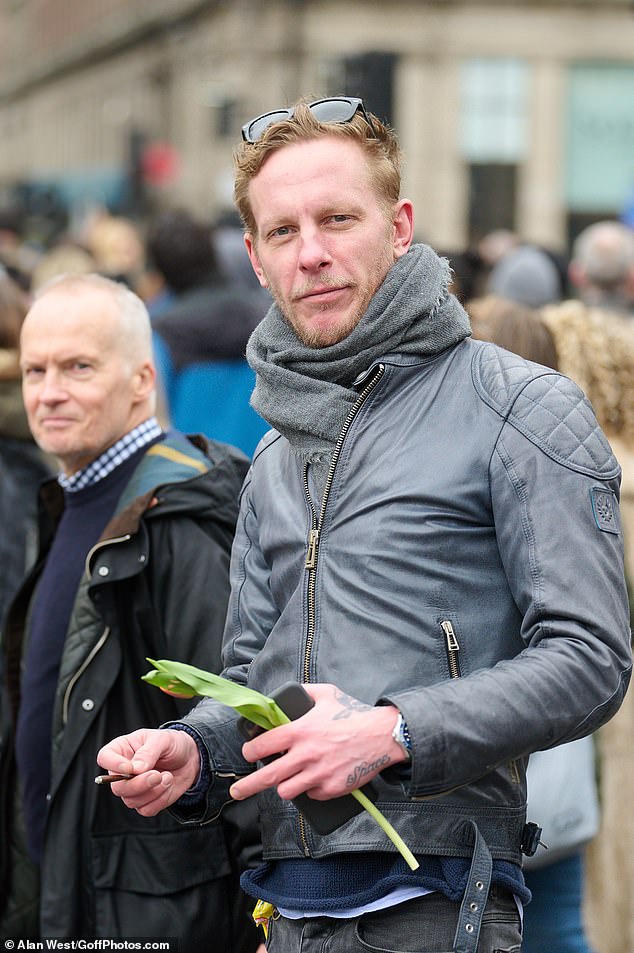 Mr Fox, the actor who is running as the anti-lockdown candidate for London Mayor, is seeking legal advice after police warned him his campaigning may be ‘breaking Covid rules’ 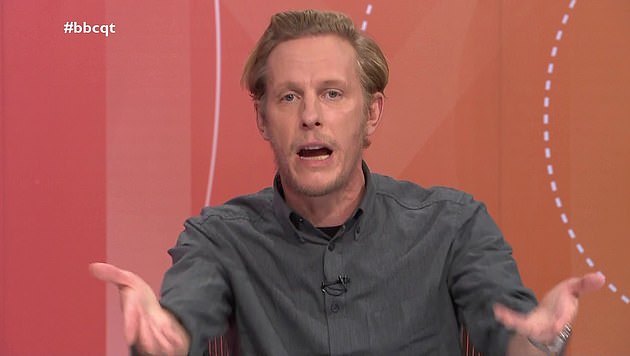 Mr Fox first shot to prominence in January 2020 thanks to an appearance as a panelist on BBC1’s Question Time. During the programme, he disputed the claim that the Duchess of Sussex had been treated in a ‘racist’ way by the British press

He added that, despite the Government saying vaccines are working with hospitalisations and deaths falling, people are still being told they cannot get back to normal until mid-summer at the earliest.

Mr Fox’s campaign will be completely funded by one donation from ex-Tory donor Jeremy Hosking, who ranked number 351 in the Sunday Times’ 2019 Rich List.

The financier spent a chunk of his £375million fortune funding the Leave campaign.

Mr Fox – who was, as he says, ‘part of a safe, arty, Leftie world earning a s***load of money from Netflix’ – voted to Remain.

He claims the Brexiteer Hosking has said to him: ‘It’s all right, darling, I forgive you.’

In an interview with the Daily Mail, Mr Fox blasted the ‘censorious mob’ – claiming ‘woke’ attitudes are a ‘burgeoning religion with no repentance and no forgiveness’.

‘I am quite Leftie, but Right or Left doesn’t matter any more,’ he added. ‘We’re entering a new area of politics. It’s authoritarian or anti-authoritarian. That’s it.

‘You’re either with or against this censorious mob who go: ‘No, you can’t say that, that’s wrong. It’s chest-feeding not breastfeeding. Tear down all the statues.’

‘It’s a burgeoning religion with no repentance and no forgiveness. I never understood before how Nazi Germany could happen. Now I do. It makes me want to resist with every single ounce of my being.’

Mr Fox first shot to prominence in January 2020 thanks to an appearance as a panelist on BBC1’s Question Time.

During the programme, he disputed the claim that the Duchess of Sussex had been treated in a ‘racist’ way by the British press.

Mr Fox was also involved in a heated debate with academic and ethnicity lecturer Rachel Boyle after she called him ‘a white privileged male’. He replied by accusing Ms Boyle, an academic at Edge Hill University on Merseyside, of ‘being racist’.

As the row continued the following day he quoted Martin Luther King’s 1963 ‘I have a dream’ speech about living in a nation where children ‘will not be judged by the colour of their skin but by the content of their character’.

The appearance on Question Time ended his 22-year acting career.

He said: ‘The funniest thing is, I’ll have an actor or director on Twitter going: ‘Laurence Fox is despicable. How appalling. How can he? Right-wing fascist…’ Then I’ll get a private message going: ‘Love you mate. I just had to do that.’ ‘