Washington: The Justice Department has opened a criminal investigation into whether President Donald Trump's former national security adviser John Bolton unlawfully disclosed classified information when he published a memoir, a case that the department opened after it failed to stop the book's publication, according to three people familiar with the matter.

The department has convened a grand jury, which issued a subpoena for communications records from Simon & Schuster, publisher of Bolton's memoir, The Room Where It Happened. In the book, Bolton delivered a highly unflattering account of his 17 months working in the Trump administration. 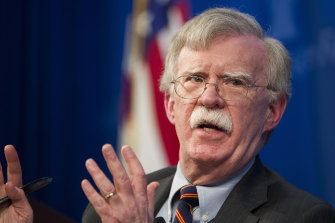 The investigation is a significant escalation in the fraught publication of the book. The Trump administration had sought to stop its publication, accusing Bolton in a lawsuit of moving forward with publication without receiving final notice that a prepublication review to scrub out classified information was complete.

The director of national intelligence referred the matter to the Justice Department last month, two of the people said. John Demers, head of the department's national security division, then opened the criminal investigation, according to a person briefed on the case.

Bolton has denied that he published classified information. Representatives for the Justice Department, the Office of the Director of National Intelligence and the National Security Council declined to comment.

Bolton's account of his time working for Trump and his efforts to get the book published set off a furore. He confirmed elements of the Ukraine scheme that prompted impeachment, wrote that the President was willing to intervene in criminal investigations to curry favour with foreign dictators and said he sought China's help in winning re-election.

Trump has made clear that he wants his former aide prosecuted. He said on Twitter that Bolton "broke the law" and "should be in jail, money seized, for disseminating, for profit, highly Classified information." He has also called Bolton "a dope,""incompetent" and the book "a compilation of lies and made up stories, all intended to make me look bad". 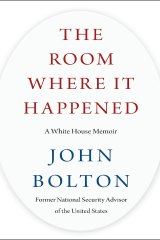 Lawyers for the National Security Council and the Justice Department expressed reservations about opening a criminal case, in part because Trump's public statements made it seem like an overtly political act, according to two officials briefed on the discussions. Others noted that a federal judge said that Bolton may have broken the law and that the case had merit.

Bolton had agreed to let national security officials review any book he might eventually write before publication in order to make sure that it contained no classified information. The department accused Bolton of giving Simon & Schuster permission to publish his book before he had official sign-off that his prepublication review was complete. It also sued to halt publication.

But the department sued Bolton just a week before his book was set to hit retailers in June, and a federal judge said that it was too late to keep the book out of the hands of readers.

"With hundreds of thousands of copies around the globe – many in newsrooms – the damage is done," wrote Judge Royce C Lamberth of the US District Court of the District of Columbia.

But in his opinion, Lamberth also suggested that Bolton could be criminally prosecuted if he did indeed allow the book to be published before he received final official notice that the government's review was complete.

"Bolton has gambled with the national security of the United States," Lamberth wrote. "He has exposed his country to harm and himself to civil (and potentially criminal) liability. But these facts do not control the motion before the court."

After viewing classified declarations and discussing them in a closed hearing, Lambert also said that he was "persuaded that defendant Bolton likely jeopardised national security by disclosing classified information in violation of his nondisclosure agreement obligations." 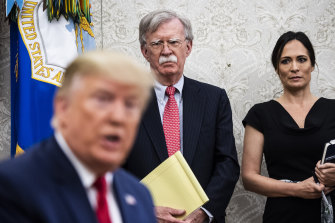 Bolton's lawyer, Charles J Cooper, rejected the judge's view. "We respectfully take issue, however, with the court's preliminary conclusion at this early stage of the case that Ambassador Bolton did not comply fully with his contractual prepublication obligation to the government," Cooper said in a statement. "The full story of these events has yet to be told – but it will be."

At issue is whether Bolton received sign-off from the government that prepublication review process was complete.

In an email, the National Security Council's top official for prepublication review said she was satisfied with the edits that Bolton had made to address her concerns about classified information.

But the White House initiated another review without notifying Bolton, and the official involved in that review said in an affidavit that he found multiple instances of classified information in the manuscript as part of that process.

Even though Bolton did not receive a final approval letter from the White House, he told Simon & Schuster to publish anyway.

Separate from the criminal investigation, Bolton still faces civil litigation that could force him to forfeit the proceeds from his book to the government, as punishment for breaching his prepublication review agreement.