Many Victorians will never forget the moment they heard the news that two police officers had been shot dead and a manhunt was underway.

Police killings are rare, and the murders of Sergeant Gary Silk and Senior Constable Rodney Miller in Moorabbin on a winter’s night in 1998 were cold-blooded and shocking.

Silk was shot before he could pull his gun from its holster, which suggests a surprise attack. Investigators believe Miller was initially fired at from inside the car they had pulled over and then fatally wounded in a shootout.

Twenty-four years later, during the retrial of Jason Roberts, who was accused of murdering the officers, some of the eight women and four men on the jury would remember that weekend and the long police investigation that followed. 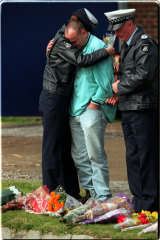 The scene on Cochranes Road, Moorabbin, the day after the murders.Credit:Jason South

They were required to shelve those memories and emotions to consider the evidence of 90 witnesses, including the traumatised police officers who cradled the dying Miller.

Having heard evidence and listened to hours of recorded conversations over three months, the jury sat through a fortnight of closing arguments by lawyers and Justice Stephen Kaye’s summaries.

If staying impartial on an infamous case wasn’t enough, the jury did so in an environment made harder by the COVID-19 pandemic.

Roberts’ trial was twice halted for week-long breaks when jurors became unwell and had to isolate, and the group of 15 selected at the start was whittled to 12 as some fell ill and were discharged.

Last Thursday, the jurors took their notebooks and went into another form of quarantine to begin deliberations.

The group sat for five days in the jury room to reach a verdict, and after every day spent deliberating – including Saturday and Sunday – they stayed in accommodation.

Keeping juries in hotels during deliberations rarely happens now, but Kaye wanted this group to retain its focus and not be distracted by home life.

That’s fair enough when Roberts’ liberty is at stake. But it’s doubtful 12 randomly selected strangers had a full appreciation of what lay ahead when their number was called in March.

On Monday, after they found Roberts not guilty, some members of the jury were visibly distressed as Kaye commended them for their robust diligence, commitment and concentration, and the way they had shouldered the “enormous responsibility” of such an important case. One juror broke down in tears.

“In my whole experience, this case has been the hardest one I’ve seen for a jury, and I really mean that,” Kaye said.