Jokes made on Last Week Tonight with John Oliver about Queen Elizabeth II in the wake of her death were censored from the U.K. broadcast.

Jabs made by Oliver on Sunday’s broadcast of the American satirical news show were cut from the U.K airing on Comcast-owned network Sky. The U.K. is in what will be a weeks-long national mourning period after the 96-year-old queen’s death on Thursday at the age of 96. 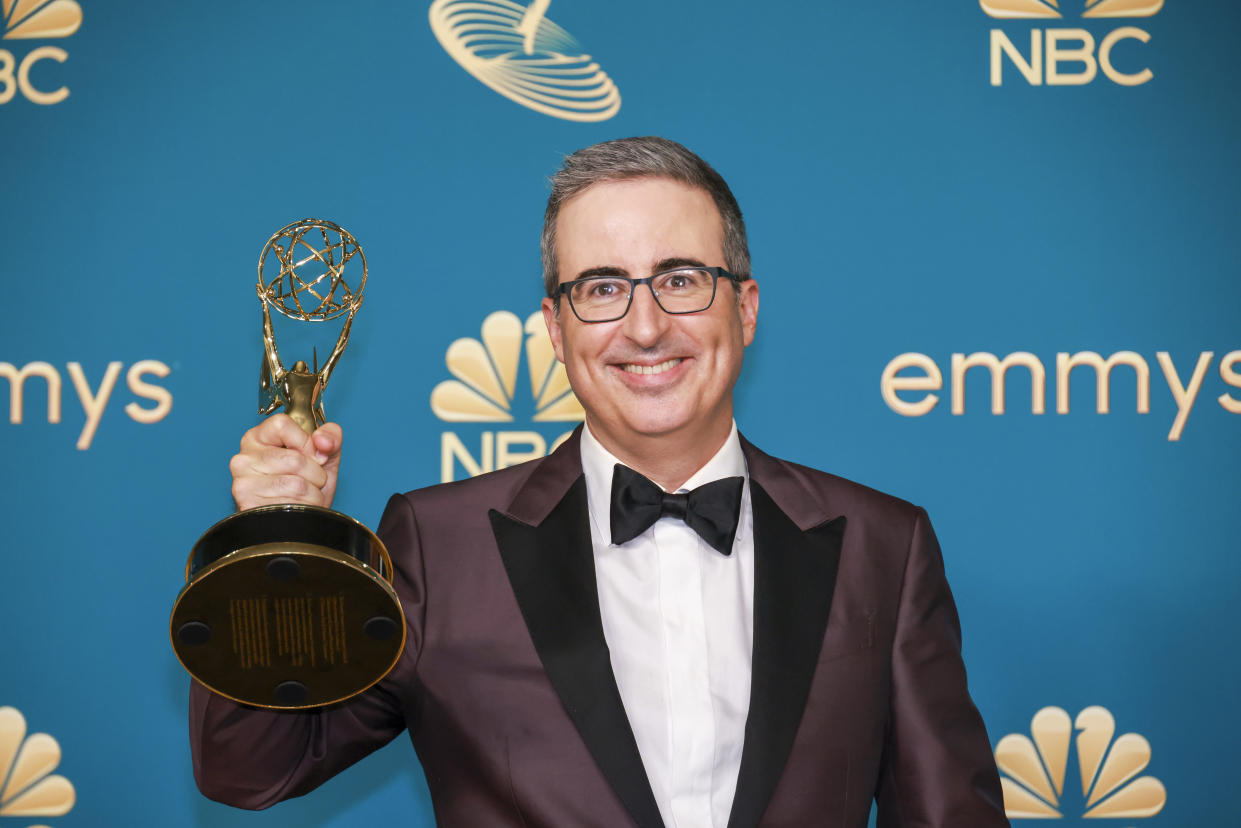 “Obviously, we need to start with the U.K., which is clearly still reeling from the shocking death of a 96-year-old woman from natural causes,” the British-born host said on the show. “It is a big moment [of] the week, and for some reason, absolutely everyone felt they had to weigh in on.”

Oliver — whose show won its seventh Emmy in the Outstanding Variety Talk Series category on Monday night — mocked tributes from brands including U.K.’s Domino’s Pizza and Crazy Frog, a Swedish CGI-animated character, saying they should have sat it out. He said the pizza company’s condolence tweet “I guess is nice,” although, “if the world is mourning, they should maybe tell the U.S. Domino’s account, whose most recent tweet as of this taping is ‘if ur reading this it means u need pizza like to confirm.’ Get your f***ing house in order Domino’s! A lady is dead!”

Oliver also took a swing at the appointment of the conservative Liz Truss as the U.K.’s new prime minister.

“The queen’s death is sadly not the only traumatic event that Britain has had to deal with this week. Because on Tuesday, Liz Truss — basically Margaret Thatcher if she were high on glue — became its new Prime Minister,” he said.

According to Variety, on Sky’s streaming platform Now, Oliver’s remarks about the brand tweets are missing and then it cut immediately to his joke about Truss. The same edited version was broadcast on Sky Comedy on Monday, leading viewers to call out Sky on social media.

“We’re not children,” one person tweeted at Sky. “Please do not censor Last Week Tonight With John Oliver again because he says a few edgy things about the royal family.” Another said the “coverage and forced mourning” is “out of hand.”

We’re not children, @SkyUK, please do not censor Last Week Tonight With John Oliver again just because he says a few edgy things about the royal family.

Don’t censor my @LastWeekTonight. I am British, I am a monarchist and I CAN TAKE A JOKE!!! @SkyUK If @iamjohnoliver wants to have an intelligent, jovial, factual opinion about our queen I wanna hear it. FFS! The coverage and forced mourning here is getting real out of hand. 🤐😤

@LastWeekTonight [email protected]
Sky cut out your joke about the queen last night. Cowards. Any chance you can put it up on here? They teased us with her picture and and truly amateurish cut.

Reps for Sky and Last Week Tonight haven’t yet responded to request for comment.

The queen’s death triggered a mourning period in the U.K. that royals requested be extended from the typical 12 days to 18 — or one week after the monarch’s Sept. 19 funeral. There’s been round-the-clock coverage of her death, including Charles’s ascent to king and Prince Harry and Prince Williams’s reunion, not just where she reigned but where she doesn’t.

Howard Stern complained on Monday about the coverage, which has taken over the U.S. media.

“It’s weird traditions and everything and I’m like, ‘Jesus, enough with the queen!” he said on Monday’s Howard Stern Show. “I mean, it’s America, we don’t have a queen.”

“The queen was a nice lady, I guess,” he said, pointing to her 70 years of service. “I get it, but we gotta get back to [Donald] Trump, where those papers are that they found at Mar-a-Lago.”

His co-host Robin Quivers asked if he didn’t “like the distraction of the queen,” to which he replied, “No, it’s annoying.”