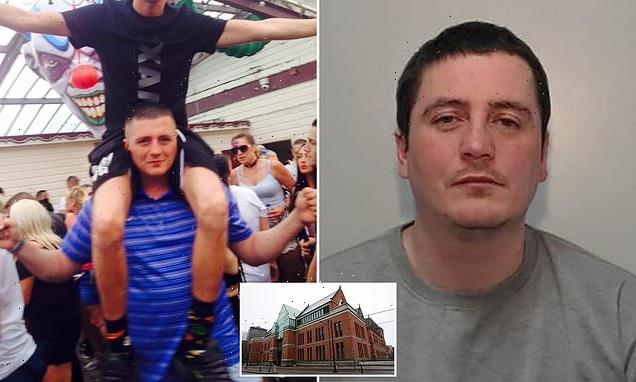 A jilted boyfriend who tried to cut off a man’s penis in a brutal attack after the victim had a fling with his ex-girlfriend has been jailed for 20 years.

James Cunliffe, 33, attempted to sever Peter German’s genitals in a frenzied revenge assault after he found the victim and his ex partner Shannon Mather drinking alcohol, listening to music and watching TV at her home.

Cunliffe stabbed Mr German, 45, seven times and targeted him around the groin area as the victim tried to fight him off.

Mr German suffered a punctured lung and wounds to his head, arm and groin, as well as injuries to his testicles.

At Manchester Crown Court, Cunliffe, of Leigh, Greater Manchester, was found guilty of attempted murder and sentenced to 20 years following a trial. 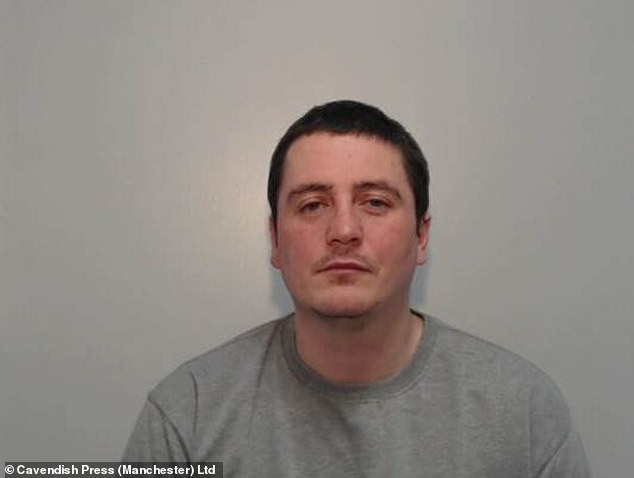 James Cunliffe, 33, of Leigh, Greater Manchester, who attempted to sever Peter German’s genitals in a brutal attack, was found guilty of attempted murder and sentenced to 20 years following a trial

Mr German who had been in an on-off relationship with Miss Mather said he had been suffering from insomnia since the attack.

He said: ‘He was trying to chop my d*** off, he was trying to cut me down there on purpose. When he stabbed me between the leg, I thought ”this is real this, he is going to kill me here.”

Mr German added: ‘It affected me being in hospital knowing I have come so close to dying and I have been having bad dreams about it. I feel really sad and down all of the time and it is going to take me ages to feel normal again

‘I am paranoid of people staring at me. Every time I have a dream, I am being chased by someone. I am sore everywhere and they cannot do anything about it. I have not been able to breathe for a few days. I keep getting headaches and throbbing all of the time.

‘The incident was fast and I can barely remember it. I remember thinking the defendant was going to cut my penis off. It was all a blur with me trying to defend myself. I remember the pain in my arm with me being slumped in the corner of the room with him over me.’

Mr German said he was in hospital for five days on morphine and the attack had left him with anxiety.

He added: ‘It was difficult for me to move and sleep. I felt awful throughout the entire time. The incident has left me with anxiety. I went to hospital feeling like I was having a heart attack but they told me it was anxiety and that I would have to learn to live with it.

‘I have since had mini anxiety attacks. It feels as if my soul is going to leave my body and like I am going to die. It feels like my head is being crushed and my ears for ringing, I feel I cannot be normal. There is not a day that goes by where I think I could have been killed. It is the most horrific experience I have ever had to go through.’

The trial was told Cunliffe has been dating Miss Mather, 31, for two years but they fell out and he had been issued with a restraining order banning him from contacting her.

But he had been ignoring the court order and became jealous of Mr German.

Gwen Henshaw, prosecuting, said: ‘The motive for this attack was jealously, fuelled by rage. There was some bad blood between these two men born out of what might be described as a love triangle.

‘The defendant was an embittered ex-boyfriend whilst the victim was the favoured partner with both having ”on-off” relationships with Miss Mather.’

On March 22, Mr German, who had spoken to Miss Mather for several months, was invited to her home.

Cunliffe attended the property at about 7.30pm to pick up some clothes only to spot his ex and the victim inside drinking alcohol, listening to music and watching TV.

He sent Miss Mather a text message saying: ‘Trust me, I’m capable of a life sentence, so don’t f****** wind me up’ and then barged into the property.

He tackled Mr German to the floor before they began struggling and Cunliffe grabbed a knife to stab him.

Miss Henshaw added: ‘He rushed in and attacked Mr German with his fists causing him serious bruising. He thought he was going to leave the address but instead went into the kitchen and grabbed a large knife 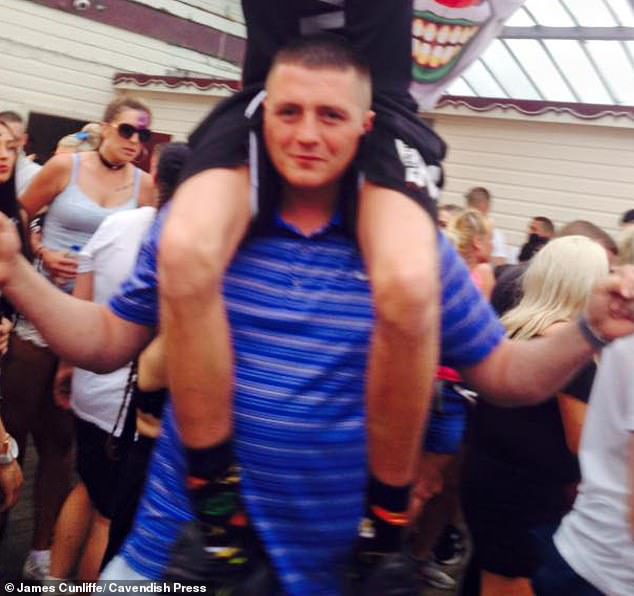 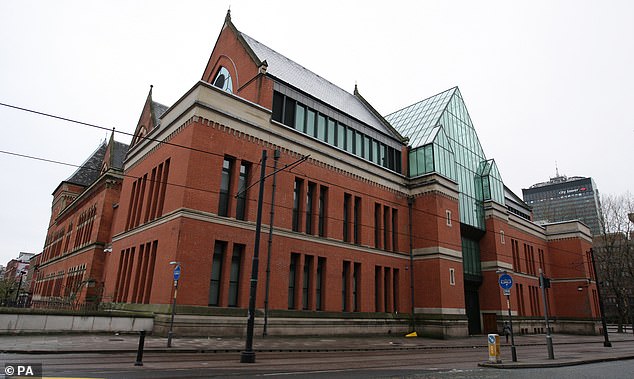 Mr German suffered a punctured lung and wounds to his head, arm and groin, as well as injuries to his testicles, Manchester Crown Court heard

‘He then returned and stabbed him to the groin, head, chest and head. Shannon Mather was shouting for him to stop. He suffered a wound to the back of his head, wound to the thigh and perineum and a further wound to his chest, which left him with inevitable scarring.’

Cunliffe eventually fled to his uncle’s house, with his T-shirt covered in blood and told him: ‘I’ve just stabbed him up.’

He washed his hands and put on a fresh shirt, before adding: ‘I’m going to the shop for some cans, I’ll see you in ten years.’

Cunliffe admitted intent to cause grievous bodily harm but denied attempted murder saying he did not intend to kill Mr German and stabbed him ‘in the heat of the moment.’

He had 32 offences on his record including common assault, possession of an offensive weapon, battery, criminal damage, assault by beating of an emergency worker.

In 2019 he was jailed for battering his next-door neighbour with a brick after the victim asked him to ‘shut him’ during an argument with Miss Mather.

In mitigation his counsel Oliver Jarvis said: ‘It is very clear this was not premeditated but spontaneous. He went to the address to collect his clothes and did not take a weapon with him.

‘He did not expect Mr German to be at the address. The defendant’s relationship with Miss Mather had just ended and he over-reacted at seeing him.

‘There are a number of stab wounds but overall the attack was short lived. These injuries were not life threatening albeit they are serious. This was to an extent a crime of passion. He just saw red, he deeply regrets his actions and he wishes to apologise.’

Sentencing Cunliffe Judge Hilary Manley told him he was a dangerous man and added: ‘You have a history of losing your temper and attacking others. Messages between you and Shannon Mather illustrate your childish and obsessive need to control her, and to always have the last word.

‘You would berate her for not permitting you to monitor her phone use and her contacts with others, and on one occasion you made dark threats about being prepared to serve time if you were crossed.

‘When you arrived and saw Peter German, a man you knew to have been in a previous liaison with Shannon Mather, you immediately saw red, and your jealousy and irrational rage, fuelled in part by the amount of alcohol you had drunk, became all-consuming.

‘You attacked Peter German, pummelling him on a sofa before going to the kitchen solely to obtain a weapon to finish him off. As he cowered back on the sofa, instinctively drawing his legs up in order to pull back from your advance, you stabbed him to the perineum, causing a very painful and unpleasant injury which could have caused permanent disability.

‘During those few minutes you, in a jealous and controlling rage, intended to kill Peter German. I am equally satisfied that afterwards, you regretted what you had done. Nonetheless, while you were in that house, you intended to kill him.

‘It is clear that you consider everyone else to be the problem – but you are the problem. Your selfish need to control your partner and your inability to control your temper – indeed your preparedness to lose control and behave as you wish when you feel that you have been wronged.’