"The coronavirus has shown that the welfare state we are so proud of has clear shortcomings, not least in terms of elderly care," he said from his party's retreat in Bommersvik. 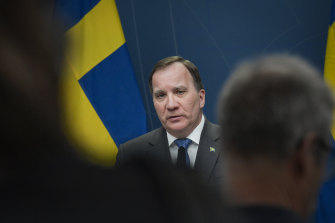 The crisis is "a reminder that the society affected by the pandemic was not a perfect society, therefore we will not go back to how everything was before," he said.

During the speech Lofven resisted calls to finance the country's emergency measures by trimming the welfare state.

"We choose welfare and we must have the world's best elderly care," he said, promising to create new jobs and invest across infrastructure.

The remarks come at a testing time for Sweden and Lofven's Social Democrat Party, which has seen its support wane over the summer, with latest polling for the party falling to 27.8 per cent, its lowest level since March.

"I want, in particular, to apologise to … all people who have lost loved ones during this pandemic."

Hogan said he had been reporting to European Commission President Ursula von der Leyen on the event in recent days.

An Irish cabinet minister quit and other lawmakers were disciplined on Friday for being among more than 80 guests at a hotel dinner in the west of Ireland hosted by Parliament's golf society. The event took place the night after COVID-19 restrictions were significantly tightened.

The golf dinner has infuriated Irish people who have been unable to attend funerals or who have had to cancel holidays or weddings because of the rules. Varadkar, leader of the Fine Gael party, said it had seriously damaged the national effort at a time when infections are rising.

At least 13 people were crushed to death or asphyxiated after police raided a Lima nightclub that was open in violation of restrictions imposed to fight the coronavirus pandemic, officials in Peru said.

At least six were injured, including three police officers, as around 120 people tried to escape the Thomas Restobar club on Saturday night as police arrived to break up a party on its second floor.

Neighbours had called police to the club in the Los Olivos district of the Peruvian capital.

"In these circumstances when people begin to fight to get out, it's tumultuous, everyone goes against each other," Orlando Velasco of the National Police told local radio station RPP.