Sadie the kelpie was a close companion for six months while her owner, Mary Milesi, worked from home.

But when Ms Milesi started leaving their flat as COVID-19 restrictions eased, the dog did not take it well. 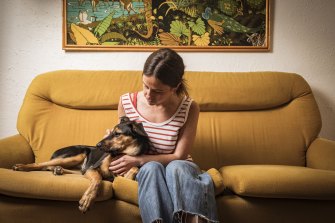 Mary Milesi is training her dog Sadie after months in isolation.Credit:Chris Hopkins

She would "bark and bark", Ms Milesi said, and cry with a repeated high-pitched sob.

"It would break your heart. You’d think her world was over."

Sadie is not alone in her pain. Dog trainers have been flat out treating canines with symptoms such as separation anxiety, fear and aggression linked to prolonged isolation during the coronavirus pandemic.

The trainers are calling the condition "COVID dog" or "COVID puppy" syndrome.

Ms Milesi, 35, of Thornbury, bought Sadie as a puppy in June and they had just one puppy school class before dog training was banned.

She said Sadie became frightened of children, barking and scaring them if they went to pat her while on a walk.

When home and hearing a stranger at the gate, "she goes crazy, barking, jumping and running, and doesn’t know what to do because she’s had no experience of it".

Karen Bailey, a dog behaviour consultant with Dog Solutions, said she was booked out until March by clients with "dogs who are anti-social and don’t have skills with other dogs, and dogs who are getting in trouble with biting and aggressive behaviour. We’re also having veterinary referrals of young dogs that are difficult to manage for medical treatment".

Ms Bailey said puppies born during the pandemic had missed social experiences "that set them up for success to be confident with new and different things". 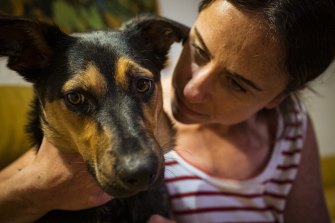 Ms Milesi bought Sadie as a puppy in June and they had just one class before dog training was banned.Credit:Chris Hopkins

Many dogs were "very uncomfortable with anyone outside their own family. It’s really, really worrying".

Daniela Sandmann, of Mindful Dog Training, said some dogs were "living in the backyard because they’re out of control in the house, have never had any rules or guidance and they’re jumping on kids and people".

She said in the park, affected dogs could not read another dog's invitation to play, felt trapped and "can snap or bark or bite, which doesn’t happen if they’ve had a chance to socialise naturally".

Ms Milesi and Sadie the kelpie are working with trainer Mia Shaw, of Smart Dog Behaviour & Training, who said some dogs had lived in a sheltered environment during the pandemic.

Ms Shaw said one 12-month-old dog "wouldn’t let me go anywhere near her, she was so fearful".

Ignoring the problem could exacerbate the issue.

"Some people won’t walk their dog because it can be a bit of an ordeal, or end up not doing as much with their dog, which is really sad," she said. "And the behaviours don’t go away."

Ms Shaw, who also works with the Lort Smith Animal Hospital, recommended getting "a good reward-based trainer. It’s important that people reach out and get some professional help. We don’t want people to surrender them because there’s some behavioural issues. That would be the worst-case scenario, when there could be help available."