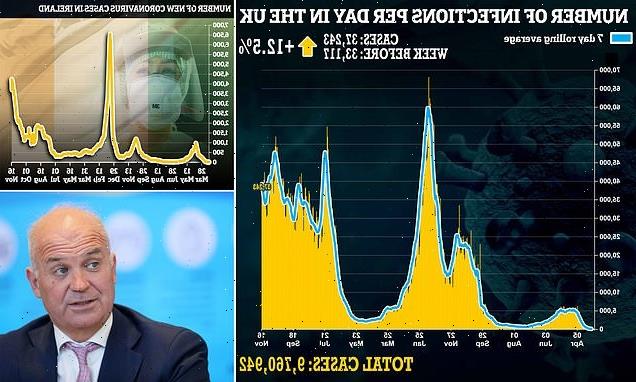 A sign of what’s to come for the UK? Ireland’s top medic claims cancelling Christmas social plans is ‘RESPONSIBLE’ as fears grow that Britain may need an Xmas lockdown because of Europe’s worsening Covid crisis

Cancelling Christmas plans is a ‘responsible decision’, Ireland’s top medic claimed today as fears grow that the exploding crisis in Europe may force Britain into imposing curbs this winter.

Starting tomorrow in Ireland, all hospitality businesses including nightclubs and pubs will be forced to close at midnight, the use of Covid passports will be expanded, and people will be advised to work from home where possible.

The country took the decision to increase restrictions because of a surge in infections, with Europe once again becoming the epicentre of the pandemic. Both Austria and the Netherlands have already reimposed curbs, and Germany is considering tightening restrictions.

Dr Tony Holohan, Ireland’s chief medical officer, said it would be up to business and individuals to decide whether to hold Christmas parties or meet up in the festive period.

No10 has repeatedly denied a lockdown will be reimposed in Britain but has left the door open to more restrictions under its winter ‘Plan B’, which would see similar measures to what are being levied on Ireland. Ministers fear the work from home mandate and compulsory mask-wearing in public, as well as the use of vaccine passports at clubs and large-scale events, could be seen in the coming months.

And Britain’s increasing infection levels over the last six days has lead to concerns it could catch up with its neighbour across the Irish sea, forcing the Government’s hand.

Speaking at a press conference on Monday, Boris Johnson warned of ‘storm clouds that are gathering over parts of the continent’ and warned the country cannot become complacent. 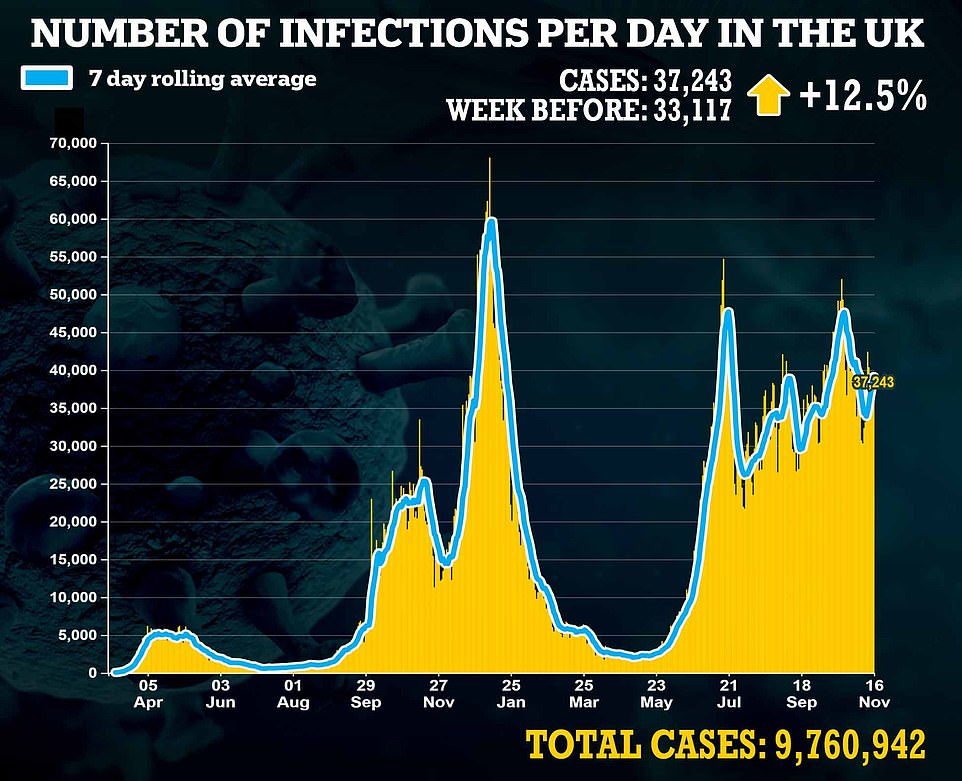 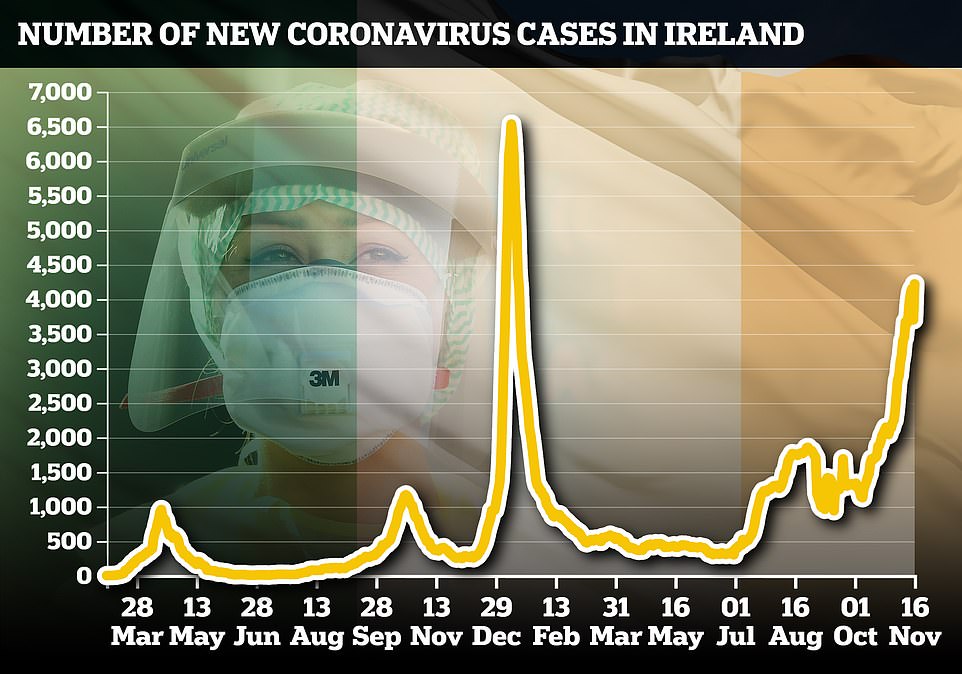 Ireland will reimpose Covid restrictions from Friday amid a surge in cases, as the Taoiseach refused to rule out going further if infections keep rising 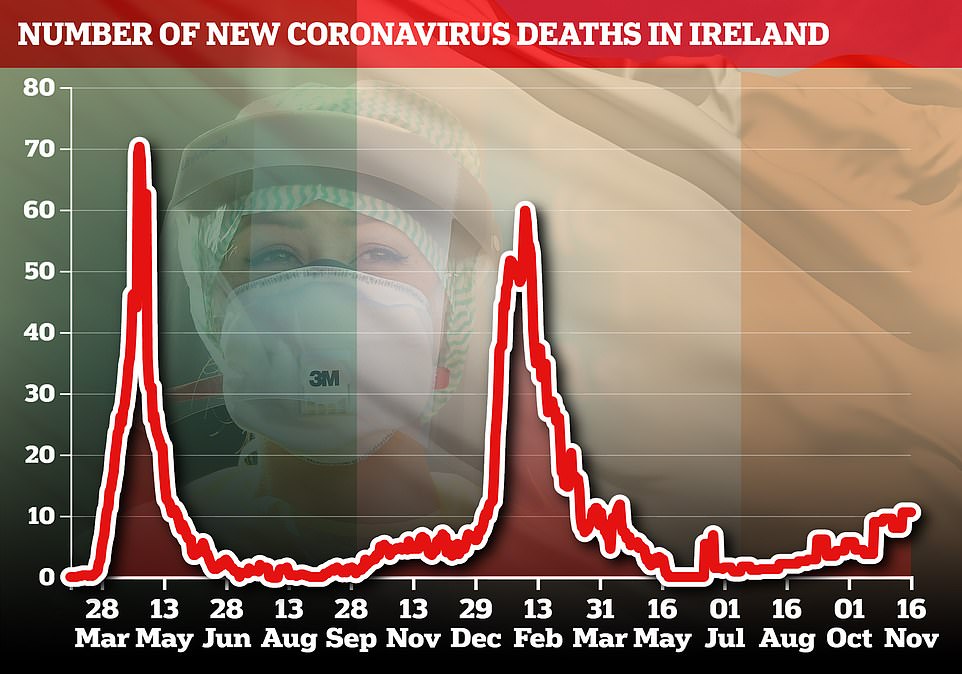 Covid deaths in Ireland are still well below the highs seen during the first and second waves, but have been ticking upwards since the end of summer 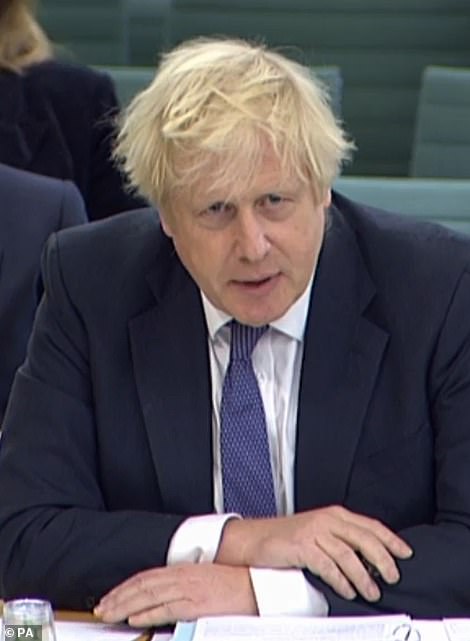 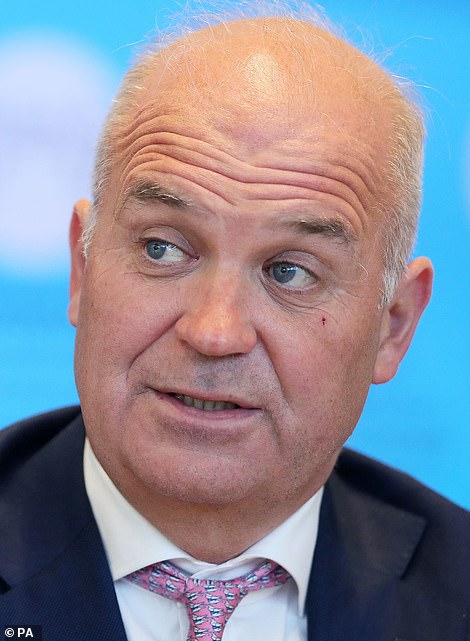 Cancelling Christmas plans is a ‘responsible decision’, Ireland’s chief medical officer Dr Tony Hoolahan (right) claimed today as the storm of cases in Europe prompted fears Britain may follow suit in imposing curbs this winter. Speaking at a press conference on Monday, Boris Johnson (pictured today, left) warned of ‘storm clouds that are gathering over parts of the continent’

Ireland has become the latest European country to reimpose Covid restrictions amid a surge in cases as winter sets in.

Starting tomorrow, all hospitality businesses including nightclubs and pubs will be forced to close at midnight, the use of Covid passports will be expanded, and people will be advised to work from home where possible.

Household contacts of people who test positive on a PCR will also be forced to self-isolate for five days even if double-jabbed, and will only be allowed out if they test negative on three separate antigen tests.

Ireland follows the lead of Austria and the Netherlands in imposing Covid curbs as Europe once again becomes the epicentre of the pandemic.

While Ireland’s current restrictions do not go as far as Austria — whose government has been accused of ‘vaccine apartheid’ after locking the unvaccinated inside their homes — Taoiseach Micheal Martin has refused to rule out going further.

‘It remains to be seen as to whether these measures will be sufficient to hold back the tide of infection and hospitalisation,’ he said in an evening address to the nation.

‘We’re not ruling out any further measures, we’ll keep them under review.’

He said: ‘A new wave of coronavirus is steadily sweeping through central Europe and is now affecting our nearest neighbours in western Europe.

‘We don’t yet know the extent to which this new wave will wash up on our shores but history shows we cannot afford to be complacent.’

Speaking about how people should act on top of the new restrictions in Ireland today, Dr Holahan said cancelling office Christmas parties would be the ‘responsible’ thing to do.

He told RTE News at One: ‘An organisation, looking at itself and looking at the kinds of measures that it now needs to take, when we’re advising people to stay at home as much as possible and work from home, those would be responsible decisions, if they were to be taken.’

The CMO said he understood this was difficult for people to hear, but warned that the country’s Institute of Public Health modelling projects there could be more than 200,000 cases of Covid next month.

‘What we’re trying to prevent is potentially 200,000 — maybe double that — people over the course of the month of December picking up this infection,’ he said.

‘I stress, none of those people are infected yet. If we have 200,000 people infected in December, 4,000 of them will end up in hospital at Christmas.

‘We will see 200,000 people being asked to self-isolate over the Christmas period, where they can’t meet up with or shouldn’t meet up with friends, family or anybody else that are important to them.

‘These are huge impacts that will be placed on the population at this time of the year, if we don’t find it within ourselves to improve our collective adherence.

‘And so, taking those measures around workplaces, to my mind would be very simple measures to cut down discretionary social contact.’

Education Minister Norma Foley urged parents not to organise birthday parties or play dates for their children in the coming weeks.

She said the chief medical officer had said ‘very clearly that we need to minimise our social interactions’.

Ms Foley said: ‘We have seen the return to play dates and birthday parties and things like that.

‘I think there’s a call now that we would minimise (that) and we would draw down again and revert to what we have done in the past.’

Ireland currently has around 85 Covid cases per 100,000 people, compared to around 57 per 100,000 in Britain. It overtook the UK at the start of the month, with cases rising consistently in the country since.

In contrast, Britain saw a sustained dip in infections from the end of October until mid-November, with cases seeing a slight uptick in the last six days.

But ministers fear the rise in cases on the continent in general could force the Government to follow other European countries in reintroducing some measures if it causes a further increase in infections on home shores.