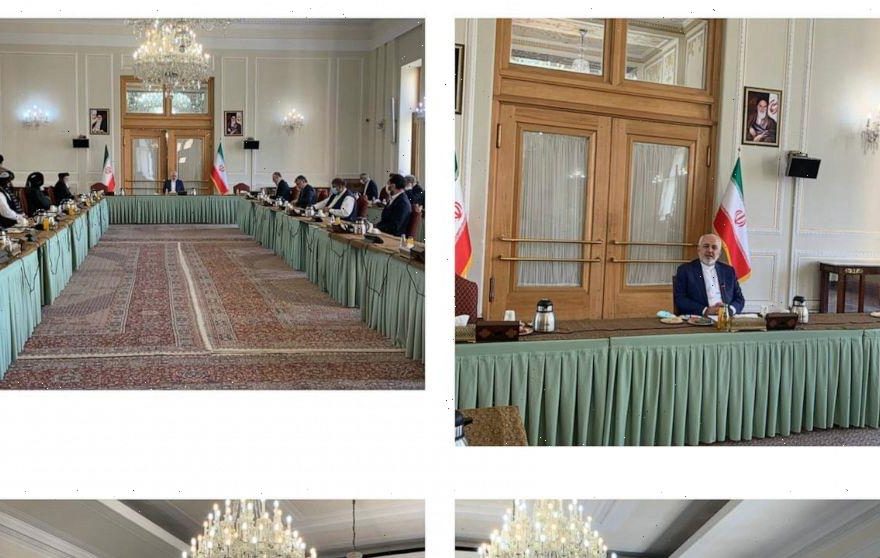 TEHRAN, Iran — Iran on Wednesday hosted the first significant talks in months between Taliban and Afghan government representatives, a surprise meeting that comes as the U.S. completes its withdrawal from Afghanistan and districts fall to the Taliban across the country.

The high-level peace talks between the warring sides follow months-old discussions in Qatar that have been stalled by a diplomatic stalemate and escalating violence. Even as officials faced each other across vast tables in Tehran and Iran’s top diplomat pledged to end the crisis, fighting surged in Afghanistan’s western Badghis province.

After the “failure of the U.S. in Afghanistan,” Zarif said, Iran stands “ready to assist the dialogue” and to “resolve the current conflicts in the country.”

“Returning to the inter-Afghan negotiation table and committing to political solutions is the best choice,” he added.

But any solution appeared a long way off Wednesday as the Taliban offensive, which has recently captured many districts in the country’s north, pushed into the western Badghis province. The insurgents attacked the provincial capital of Qala-e-Naw from several sides, its governor Hasamuddin Shams said, adding that Afghan troops had so far managed to push the Taliban fighters back.

From the early hours of Wednesday morning, battles have raged near the provincial police headquarters and a Qala-e-Naw army base, said Abdul Aziz beg, head of the provincial council in Badghis.

Videos widely circulated on social media appeared to show Taliban fighters speeding into the provincial capital on motorcycles. Other clips show insurgents approaching the city’s prison and releasing inmates. The Associated Press could not independently verify the authenticity of the footage.

Fawad Aman, the Afghan defense minister’s deputy spokesman, promised security forces would clear the city in the coming hours. The Taliban have not publicly commented on the violence in Qala-e-Naw.

The surge of fighting, and the sudden news of peace talks in Tehran, come at a critical time for the war-battered country.

After a two-decade-long military campaign, the U.S. military announced on Tuesday that 90% of American troops and equipment had already left the country, with the drawdown set to finish by late August. Last week, U.S. officials definitively vacated the country’s biggest airfield, Bagram Air Base, the epicenter of the war to oust the Taliban and hunt down the al-Qaida perpetrators of the 9/11 terrorist attacks on America.

The Taliban have made relentless territorial wins since April, when President Joe Biden announced the last 2,500-3,500 U.S. soldiers and 7,000 allied NATO soldiers would depart Afghanistan. With their victories in northern and southern Afghanistan, the Taliban are escalating pressure on provincial cities and gaining control of key transportation routes.

Afghanistan’s uncertain path toward peace bears profound consequences for Iran, its western neighbor, which hosts hundreds of thousands of undocumented Afghans. Fears have grown in Iran over a wave of Afghans seeking refuge in the country, which already is struggling to stem worsening poverty under tough U.S. sanctions.