A U.S. intelligence assessment has reportedly indicated that the mysterious explosion involving Russia’s nuclear cruise missile prototype occurred during a salvage mission, rather than a test.

The mysterious explosion on August 8 at the Russian navy’s range in Nyonoksa killed seven and spurred fears that Russia was testing its nuclear-powered Burevestnik missile, also known by the NATO codename ‘Skyfall.’

But U.S. intelligence indicates the fatal explosion occurred as Russia attempted to salvage a downed Skyfall missile from the ocean floor, two sources with direct knowledge of the report told CNBC.

‘This was not a new launch of the weapon, instead it was a recovery mission to salvage a lost missile from a previous test,’ one source told the outlet. 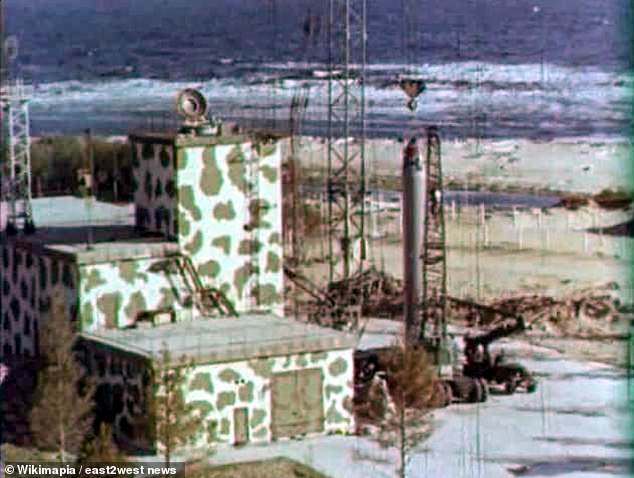 The Central Military Naval Testing Area Nyonoksa is seen in a file photo. A deadly explosion in the White Sea there has been linked to Russia’s experimental Skyfall nuclear missile 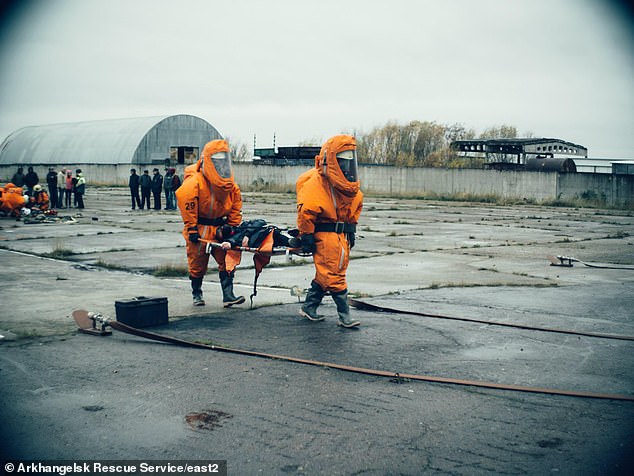 Employees of the nearby Arkhangelsk Rescue Service are seen during training. Arkhangelsk medical workers responded after the explosion 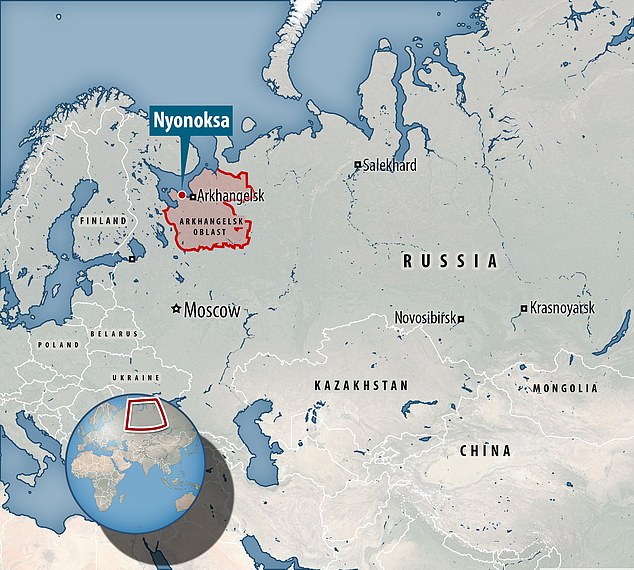 Another said: ‘There was an explosion on one of the vessels involved in the recovery and that caused a reaction in the missile’s nuclear core which lead to the radiation leak.’

The explosion on the White Sea killed two servicemen and five nuclear engineers and injured six others.

Satellite images and photos from the scene appear to show damage to floating pontoon platforms in the ocean off the testing range.

Nuclear-powered cruise missiles use the heat from an un-shielded nuclear reactor to power a ramjet engine at supersonic speeds, and have a virtually unlimited range.

The U.S. dabbled with the idea of nuclear cruise missiles in the 1960s but abandoned the project, at least officially, as too dangerous and provocative.

President Donald Trump has tweeted that the U.S. has ‘similar, though more advanced, technology’ to Skyfall. It is unclear whether he was revealing state secrets, or merely incorrect.

Russia has reportedly conducted five unsuccessful tests of Skyfall since November 2017, all resulting in loss of control and crashes.

The longest test lasted for two minutes with the missile flying 22 miles, and the shortest lasted four seconds and five miles, the U.S. believes.

At those distances, the tests apparently failed to initialize the nuclear-powered engine at the hart of the missile, which would likely be launched with conventional rocket boosters to reach ramjet speed. 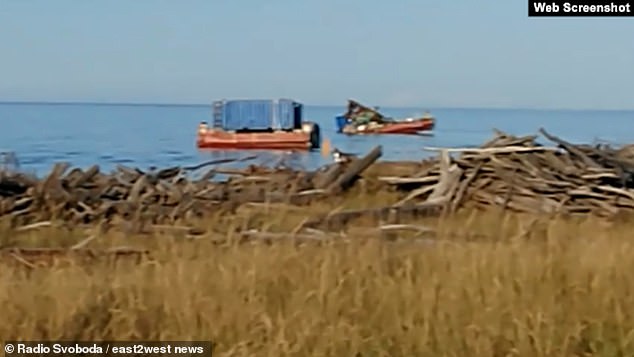 Photographs of destroyed pontoons circulated on social media after the explosion 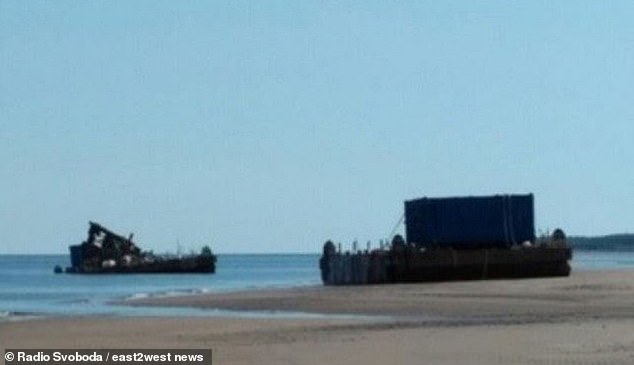 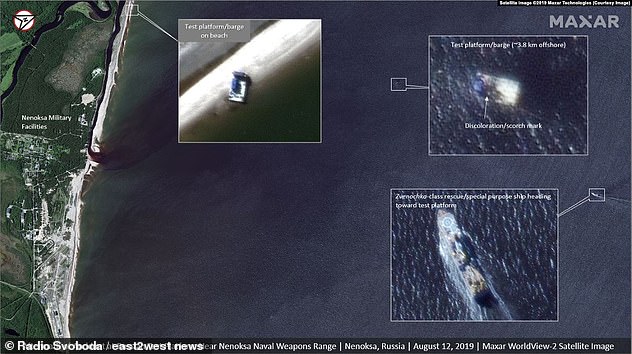 There were dramatic satellite pictures (pictured) of the pontoons, which were some two-and-a-half miles offshore when the explosion happened

Officials have said the explosion in Nyonoksa occurred during tests of a ‘nuclear isotope power source’ of a rocket engine, but have not confirmed it was during a test of Skyfall.

Russia’s state weather and environmental monitoring agency Rosgidromet said Monday the brief rise in radiation levels was caused by a cloud of radioactive gases containing isotopes of barium, strontium and lanthanum that drifted across the area.

The agency said its monitoring has found no trace of radiation in air or ground samples since August 8.

Alexei Karpov, Russia’s envoy to international organizations in Vienna, told the Comprehensive Nuclear Test-Ban Treaty Organization on Monday that ‘the tragic accident that occurred has nothing to do with nuclear tests.’

But, he said, the tests at the range ‘were related to the development of weapons, which we had to start creating as one of the retaliatory measures in connection with the U.S. unilateral withdrawal from the Anti-Ballistic Missile Treaty in 2002,’ according to a Russian foreign ministry transcript. 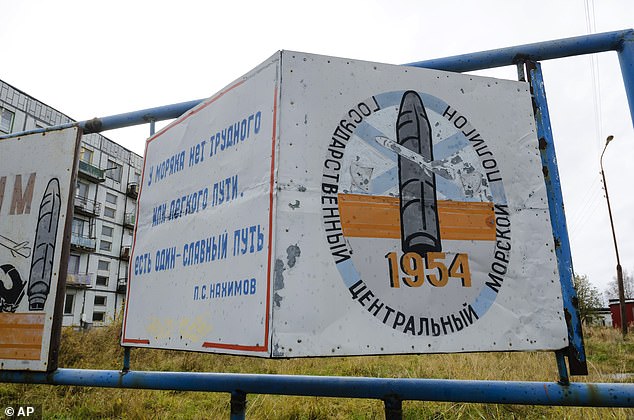 A billboard reads ‘The State Central Navy Testing Range’ near residential buildings in the village of Nyonoksa in this file photo. The village was evacuated after the explosion 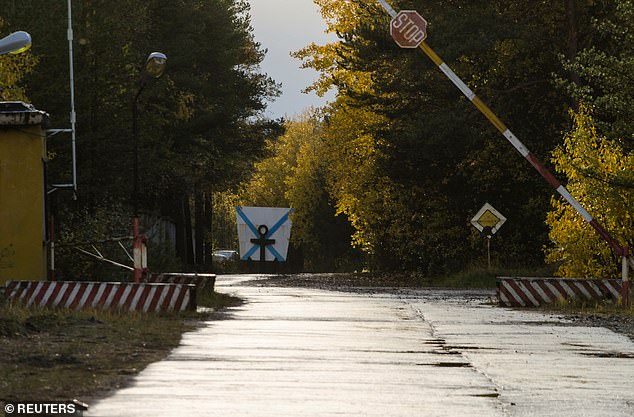 A view shows an entrance checkpoint of a military garrison located near the village of Nyonoksa in Arkhangelsk Region, Russia

Contradictory statements from the authorities and their reluctance to reveal details of the explosion have drawn comparisons to the Soviet cover-up of the 1986 explosion and fire at the Chernobyl nuclear power plant, the world’s worst nuclear disaster.

The Defense Ministry denied any radiation leak even as the local administration in Severodvinsk reported a hike in radiation levels and told residents to stay indoors – a move that prompted frightened residents to buy iodine, which can help reduce risks from exposure to radiation.

Russian media reported that the victims of the explosion received high doses of radiation.

They said that medical workers at the Arkhangelsk city hospital that treated three of those injured said they hadn’t been warned that they would treat people exposed to radiation and lacked elementary protective gear.

The Moscow Times on Monday cited Igor Semin, a cardiovascular surgeon at the hospital, who scathingly criticized the authorities in a social network post for failing to warn the hospital workers about the deadly risks. ‘They were abandoned and left to fend for themselves,’ the newspaper quoted Semin as saying.

Asked about the doctor’s statement, Kremlin spokesman Dmitry Peskov said that the authorities will look into the matter.

Why the US abandoned nuclear cruise missiles as too dangerous

In the mid-1950s, the U.S. Air Force conceived of a nuclear-powered missile dubbed the Supersonic Low Altitude Missile or SLAM.

Powered by an un-shielded nuclear reactor superheating the air in a supersonic ramjet, the missiles would be able to cruise indefinitely around the Earth just a few miles over the ground.

The missiles were intended to deliver nuclear weapon payloads, but would also cause devastating damage via shock waves and radiation. 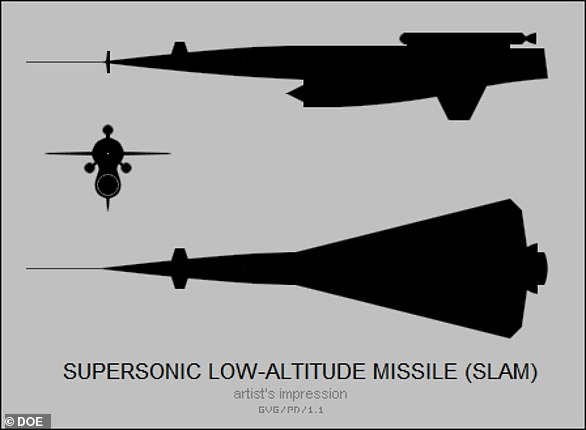 In the mid-1950s, the U.S. Air Force conceived of a nuclear-powered missile

After launch, the missiles could in theory fly in circles over the ocean indefinitely until called ‘down to the deck.’

Skimming just above the ground, the missiles would be impervious to traditional missile defense and difficult to spot on radar.

After delivering their nuclear warhead payloads, the missiles could continue to cause tremendous damage and loss of life simply by cruising in circles over populated areas spewing radiation and flattening buildings with shock waves.

The missiles could also be crashed into a population center to inflict maximum radiation damage from the un-shielded nuclear core. 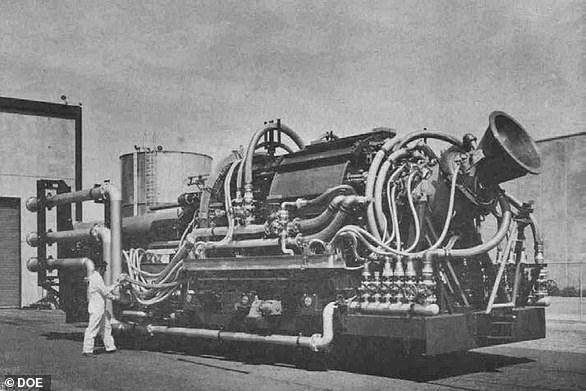 The U.S. conducted ground tests of a nuclear-powered ramjet engine under Project Pluto, but the project was officially scuttled in 1964 as being too fearsome and provocative.

War planners feared that if the U.S. developed the horrifying and unstoppable missiles, the USSR would be forced to do the same.