Delhi: Indian and Chinese troops have locked horns again along their disputed border, Indian officials said on Monday, in a sign that the deadly tensions that erupted in June between the world's two most populous countries are not going away.

In a terse and somewhat cryptic statement, India's defence ministry said the Chinese army had "violated the previous consensus" and "carried out provocative military movements" near Pangong Tso Lake, in the remote Ladakh region. 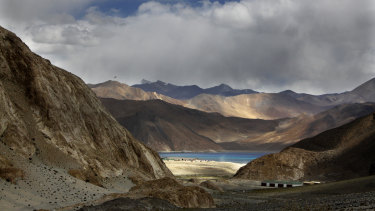 Indian army officers and security analysts said Chinese troops landed a few days ago on the southern side of the lake, which traditionally has been considered Indian territory — a move the Indians saw as the latest example of Chinese aggression in a long string of provocations.

The move provoked a standoff and then a rapid buildup. Troops from both sides yelled at each other and surged to within a metre or two before commanding officers from both sides pulled them apart.

No punches were thrown and no one was injured, the analysts said, and the incident was much less severe than the vicious hockey-brawl type of melee that exploded in June in roughly the same area, when 20 Indian soldiers and an unknown number of Chinese troops were killed. 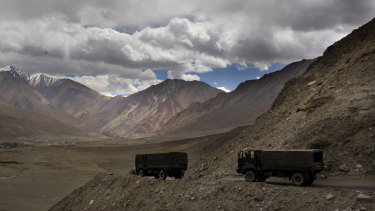 Neither side is backing down. Both countries are driven by dominant, nationalistic leaders — in India’s case, Prime Minister Narendra Modi, and in China’s, President Xi Jinping.

Each nation has sent in thousands of reinforcements, supported with all the tools of modern warfare — tanks, artillery, helicopters and fighter jets. And no third country has emerged as a peacemaker to ease the tensions.

In June, north of that area, the worst clash between the two nations in decades erupted. High up in the mountains, in the rocky and isolated Galwan Valley, hundreds of troops raged at each other with rocks, sticks, clubs and their bare fists. Indian officials said Chinese soldiers even used specially made iron clubs, with spikes welded to their tips, to inflict maximum damage.

China never specified its casualties, but Western intelligence officials have estimated that China probably lost around 20 soldiers as well.

For more than half a century, this border has been a sore spot. In 1962, the two Asian giants fought a brief war over this same lifeless land. China won and wrested away a chunk that India still claims.

Though the border has never been demarcated, the two sides eventually worked out protocols on how to patrol it, advising their soldiers not to shoot at each other. This kept the occasional border confrontation or dispute from turning deadly, up until the enormous brawl in June.

On Monday, the Indian media swung into action, running wall-to-wall television coverage and raising jingoistic feelings. Maps broadcast by Indian channels showed two lines cutting through Pangong Tso Lake — one to the east, which India believes is the border, and one that lies several kilometres to the west, which is what China claims.

"The Chinese are playing their usual game of surprise and deception," said Brahma Chellaney, a professor of strategic studies at the Delhi-based Centre for Policy Research. "They have opened a new front." 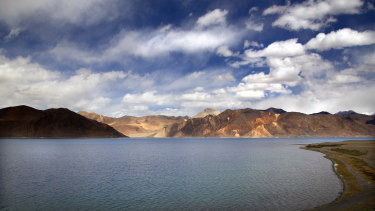 Soldiers faced off near Pagong Lake in Ladakh region. Credit:AP

Residents in Ladakh, which is a mountainous region historically connected to Tibet, said that Indian soldiers had shut down one of the area's main highways — again — and that troop convoys were chugging up the windy roads on their way to the border.

Ladakhis have complained for years that Chinese troops have been steadily nibbling away at Indian territory, taking over high-altitude pasture land and blocking traditional herding routes, and that the Indian army knew about this and did nothing.

India's military is less advanced than China's, and India has been trying to walk a fine line, sounding tough but not striking back in Chinese territory or doing anything that might set off a major conflict against a superiorly armed foe.

"The military option to deal with transgressions by the Chinese army in Ladakh is on, but it will be exercised only if talks at the military and the diplomatic level fail," General Bipin Rawat, head of India's military, said in August.

Indian analysts said the Chinese were stepping up their campaign to change the facts on the ground around Pangong Tso Lake. Until recently, it was a major tourist attraction in India, with visitors flocking to the lake in the summer to admire the many shades of blue its cold waters reflected.

Now no tourists are allowed to come even close. Within the past few months, analysts said, the Chinese have built observation towers, fortified bunkers and two new marinas.

"The Indian army has lost face in the encounters so far with the PLA," he said. "So it will be doubly determined to not take any more guff from the Chinese."

Whether or not a major war erupts is "the PLA's call," he said, and "the Indian government's cautious passive-defensive mindset doesn't help."