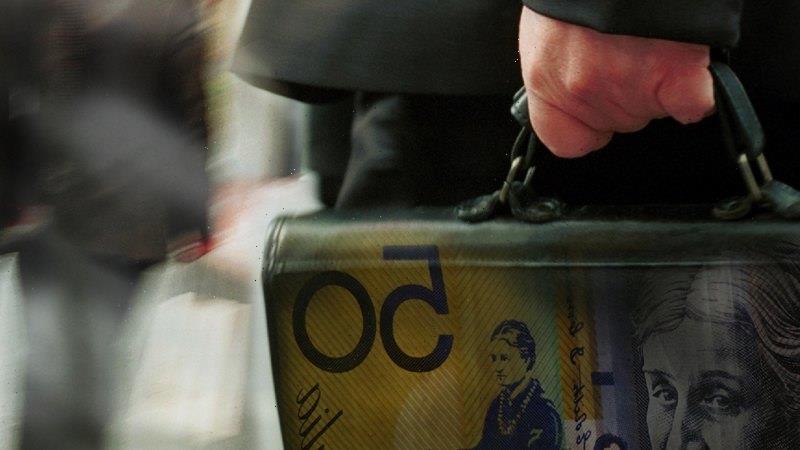 Are we about to elect the best politicians money can buy?

Quite possibly – and we would not even know. Australia’s political donation laws are absurdly out of date and not fit for purpose.

Yet reform of this vital component of our democratic machine is not even being discussed. After all, neither the current crop of large donors nor their beneficiaries would welcome debate about how these mutually beneficial arrangements protect their exclusive access to power. 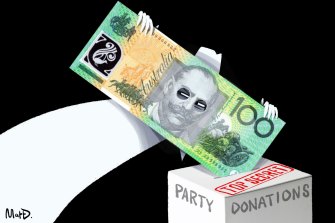 A major problem with our current regime is that donors are not identified until well after the event.Credit:Illustration: Matt Davidson

Fundraiser cocktail parties, lunches and dinners raise hundreds of thousands of dollars, typically paid by property developers, lobbyists and sundry business figures to get close to senior ministers and leaders from state and federal parliaments.

There is no such thing as a free lunch, but there are cheap ones. The ongoing Independent Broad-based Anti-corruption Commission inquiry into property developer John Woodman has revealed allegations that a mere $5000 can get you an MP’s ear – a small part of the cost of doing business for the seemingly less scrupulous.

In pursuit of the dollars, ministers take time out from their onerous schedules, and priority is given to glad-handing donors at yet another ghastly, tedious, rubber chicken – or lobster – dinner. Recycled Victorian Opposition Leader Matthew Guy cannot shake the Lobster with a Mobster (alleged) tag so effectively weaponised by the ALP, a legacy from a lavish lunch with an accused crime boss during his tenure as planning minister in the previous Coalition government.

That is quite apart from the challenge to our democracy posed by billionaire Clive Palmer donating millions to his own party and spending it to influence how some voters mark their ballot. His barrage of full-page newspaper, billboard and TV ads that assert ex-Liberal backbencher now UAP “leader” Craig Kelly will be the next PM or that mortgage rates will be somehow magically capped are arguably not just absurd but misleading. But there is nought that can be done under existing laws to prevent them.

While the concerns of wealthy donors are pushed to the front of the queue, the combined voices of the respected and authoritative Transparency International, the Centre for Public Integrity, the Australia Institute and the Australian Democracy Network are being mostly ignored. They all advocate urgent political donation law reform.

There is nothing wrong with people and corporations donating money to help their preferred political party into power. But there is everything wrong with it being done covertly, using the smokescreen provided by the ineffectual disclosure rules.

A major problem with our current regime is that donors are not identified until well after the event. It often takes 18 months for details of who gave what to be made public. There is no reason to persist with this system designed with technology no more sophisticated than morse code in mind.

Uncoupling the disclosure of political donations from the release of the following financial year’s full accounts is technically simple. The ALP, Liberals and Nationals already have all the information at their fingertips – they know where their money comes from. But they prefer we do not find out until the carnival has moved on.

The teal independents, however, are showing a different path, with the simple application of existing technology allowing anyone to see who is donating how much to any individual campaign.

For instance, at the time of writing, my former ABC colleague Zoe Daniel, the independent challenging Liberal MP Tim Wilson in Goldstein, has a list on her website declaring roughly $1,380,000 in total from about 2500 individual donors. Most supporters fork out a couple of hundred dollars, although some declare amounts in the thousands. About a quarter prefer to remain anonymous.

Major political donors across the parties include gaming giants in every state and, until recently, the troubled casino operator Crown Resorts, which announced it would stop making political donations just as separate royal commissions in Victoria, New South Wales and Western Australia started investigating close links to organised crime.

From its first days, Crown enjoyed preferential treatment from successive governments (for instance, exemption from smoking bans) which has always been justified by its status as a major employer, not a major donor (or it being a huge source of tax revenue).

Under existing laws, political parties need not reveal who makes a donation unless it is more than $14,300, a threshold which is annually indexed. Ridiculously, there is nothing stopping someone from making multiple undeclared donations of $14,295, a technique independent MP in Warringah, Zali Steggall, was found to have benefited from.

The delay in disclosure means joining any dots between money donated and favours awarded is more difficult than it ought to be.

It is no coincidence the states with problems in recent years – NSW, Queensland, WA and Victoria — have all ended up with strong anti-corruption commissions. All have adopted stricter laws than the federal scene.

We derive no comfort from a set of rules so deficient that they frustrate their stated purpose. Will either party accept the reform challenge? Don’t hold your breath.

Along with a truly independent anti-corruption commission and a long-overdue review of freedom of information laws, our democracy needs better protection from the corrosive impact of unaccountable power. Whether solving crimes or tracing political influence, always follow the money – it explains everything.