Is North Korea about to fire another missile? Kim Jong Un’s submarine puts to sea amid fears he is developing nuclear missile that can be launched at the US from underwater

Satellite imagery of a North Korean shipyard on Friday shows activity suggestive of preparations for a test of a medium-range submarine-launched ballistic missile, a US think tank reported on Friday.

The Center for Strategic and International Studies said the images it published on its website of North Korea’s Sinpo shipyard showed several vessels within a secure boat basin, one of which resembled vessels previously used to tow a submersible test stand barge out to sea.

It said the activity was ‘suggestive, but not conclusive, of preparations for an upcoming test of a Pukguksong-3 submarine launched ballistic missile from the submersible test stand barge.’

North Korea said last October it had successfully test-fired a Pukguksong-3, a new submarine-launched ballistic missile (SLBM), from the sea as part of efforts to contain external threats and bolster self-defence. 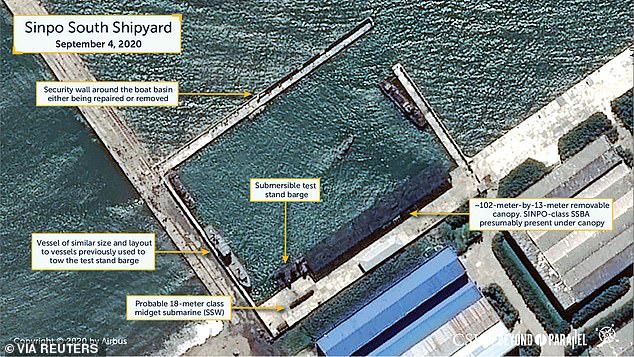 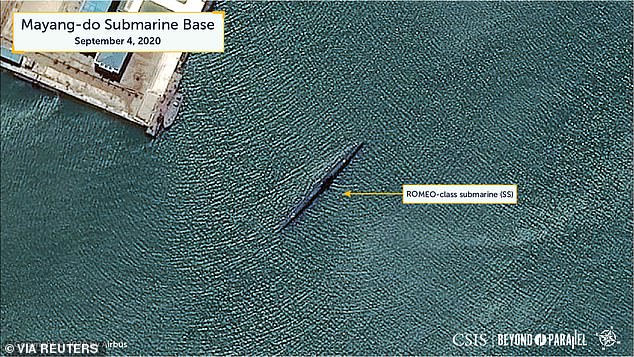 A handout photo shows a close-up view of a ROMEO-class submarine (SS) anchored within the southern section of the bay of the Mayang-do Submarine Base in Mayang-do, North Korea, issued yesterday 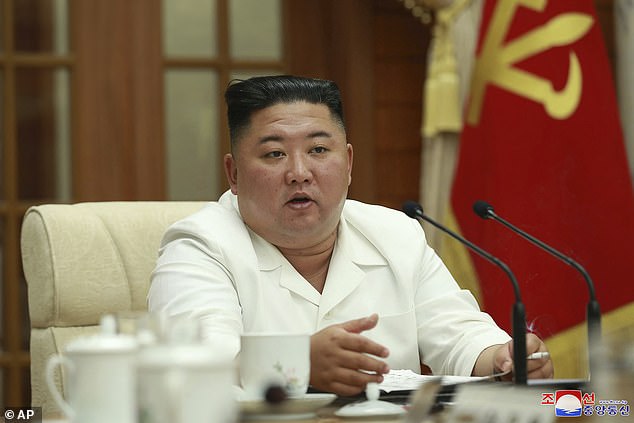 North Korean leader Kim Jong Un attends an enlarged meeting of the Politburo of the ruling Workers’ Party in Pyongyang, North Korea at the end of August

That launch was seen by analysts as the most provocative by North Korea since it entered dialogue with the United States over its nuclear weapons and missile programs in 2018.

North Korea has suspended long-range missile and nuclear tests since 2017, but efforts led by U.S. President Donald Trump to persuade it to give up its nuclear and missile programs have achieved little.

Trump is seeking reelection in November and a North Korean missile test before that would highlight the lack of progress despite Trump’s unprecedented meetings with North Korean leader Kim Jong Un.

There was no immediate comment from the State Department or the Pentagon on the CSIS report.

At news conference earlier on Friday, Trump hailed his relationship with North Korea, saying that when he was elected people had predicted he would be at war with the country within a week.

‘In the meantime, we’ve gotten along with them. We didn’t get to war,’ he said. 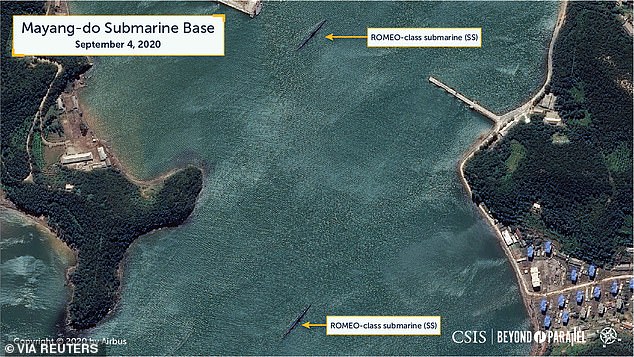 A handout photo shows two ROMEO-class submarines (SS) anchored within the bay of the Mayang-do Submarine Base in Mayang-do, North Korea yesterday 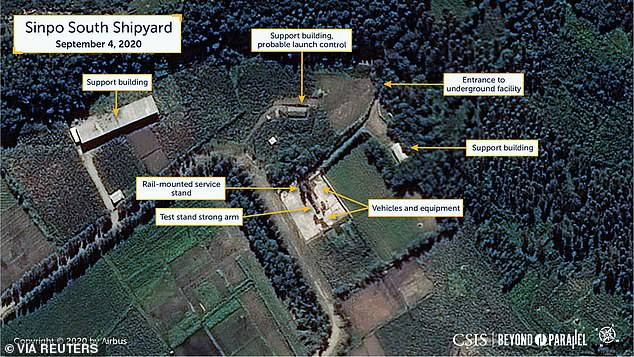 A handout photo shows an overview of the rail-mounted service stand and test stand strong arm at the Sinpo South Shipyard in Sinpo, North Korea yesterday

Trump has held up the absence of intercontinental ballistic missile and nuclear tests by North Korea since 2017 as a success from his diplomacy and has sought to play down numerous shorter-range tests in the period.

‘North Korea already tested a PKS-3 SLBM last October. And it didn’t cross Trump’s redline then, and is unlikely to this time. Trump won’t care,’ Vipin Narang, a non-proliferation expert at the Massachusetts Institute of Technology, wrote on Twitter.

South Korea’s military said the Pukguksong-3 tested last year flew 280 miles and reached an altitude of 565 miles and would have had a range of about 800 miles on a standard trajectory.

News of the activity at Sinpo comes amid signs that North Korea may be preparing for a major military parade in October, which some analysts believe could be used to show off new missiles as the country has done at such events in the past