Nazis on the brink of defeat: Powerful images from the end of World War Two show the collapse of Hitler’s army

These rare photographs offer a glimpse into the lives of German soldiers as they faced defeat during the end of World War Two.

Overstretched and under-supplied, the Nazi forces in western Europe in 1944 – many of whom were inexperienced teenage conscripts – faced the onerous task of defending against the overwhelming strength of the allied forces.

One of the remarkable images from the final stages of the war shows a young teenage soldier stretching out a Swastika flag in the vain hope that the Luftwaffe will see it and provide aerial cover.

Others show Nazi prisoners of war being marched through bomb-ravaged streets by their American captors and ravaged towns guarded by exhausted troops.

The striking images are included in Hans Seidler’s new book Images of War: Hitler’s Defeat on the Western Front 1944-1945, a compelling account of the Nazis’ ten-month struggle against the overwhelming Allied military might on the Western Front, to be released at the end of this month. 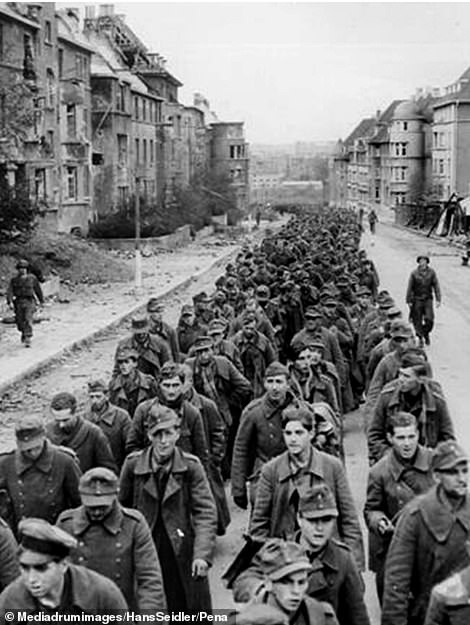 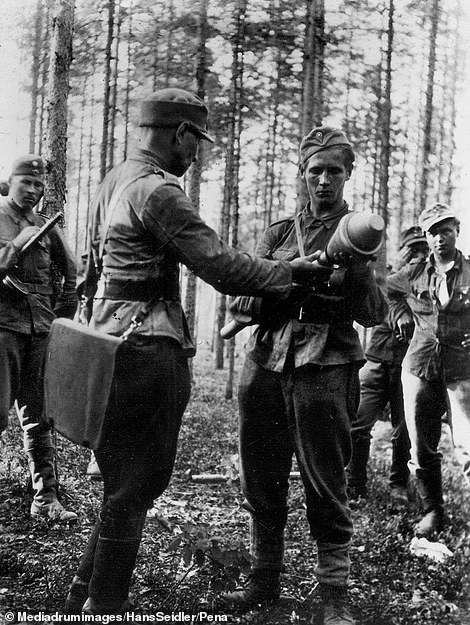 Hundreds of dejected German prisoners of war (left) file through a ravaged town in their home country, flanked by their American captors, towards the end of World War Two in 1944. A Nazi recruit (pictured right) is taught how to use a Panzerfaust, a shoulder-type German antitank weapon that was widely used throughout the war. 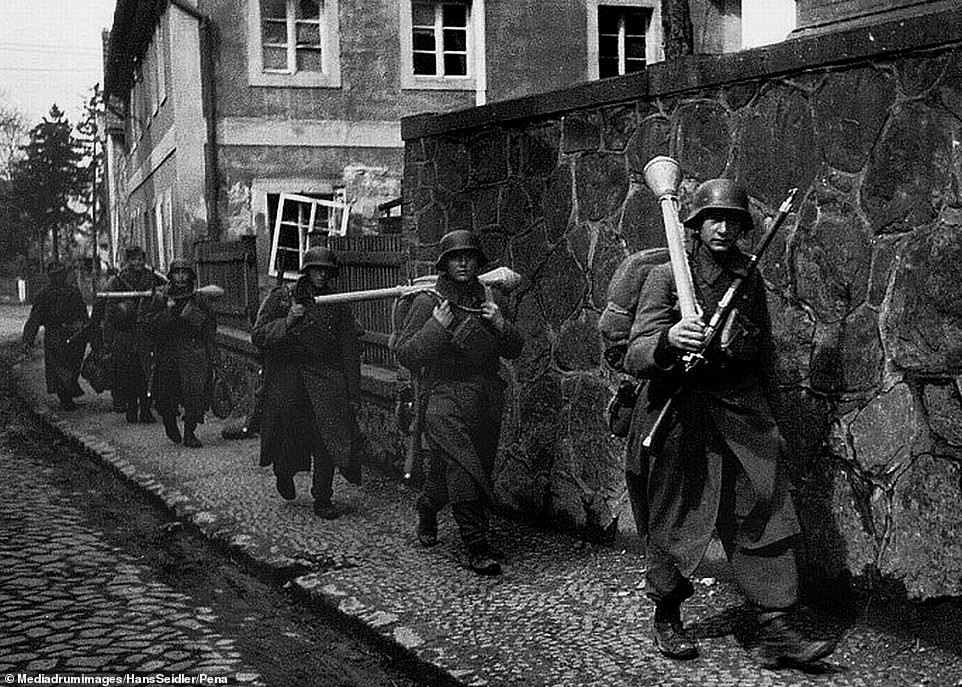 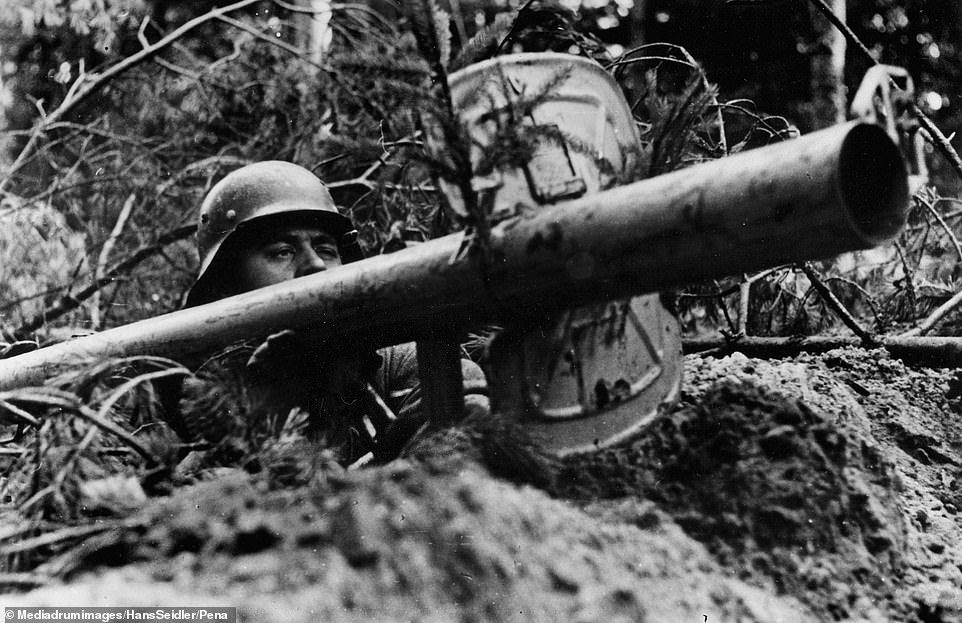 A German soldier armed with the lethal Panzerschreck, also dubbed the tank destroyer, lines up a shot against the invasion of allied forces on the frontline. The shoulder-type rocket launcher consisted of a lightweight steel tube about 5 feet long that weighed around 20 pounds 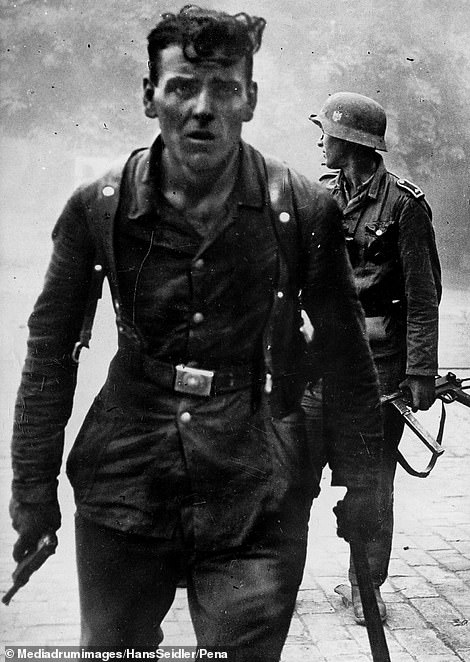 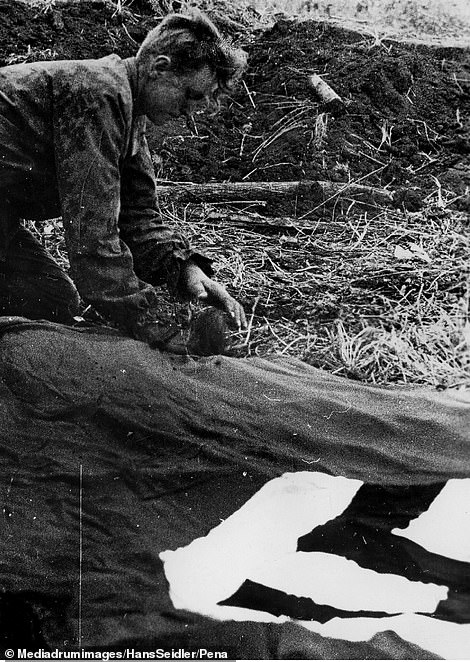 A German soldier (pictured left) armed with a P08 Luger pistol and an M24 stick grenade, referred to as a Stielhandgranate, moves forward as the Nazis do everything they can to prevent the allied forces from sweeping through north-west Europe. Behind him, a non-commissioned officer can be seen armed with the MP40 machine pistol. A fresh-faced Hitler’s Youth soldier (right) in full summer camouflage Swastika flag in the vain hope that the Luftwaffe will see it and provide aerial cover. He can be seen placing rocks on the flag to prevent it from blowing away in the wind 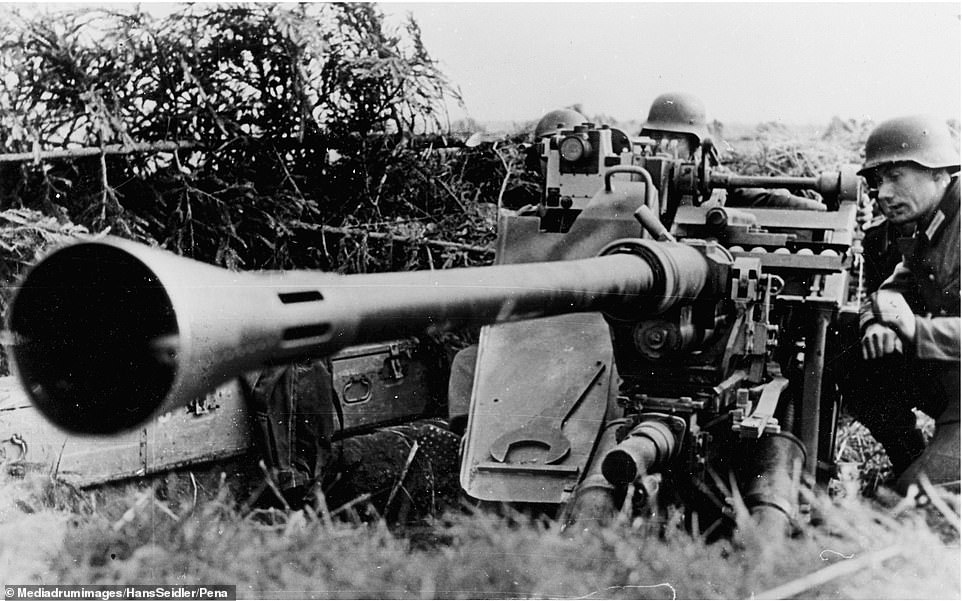 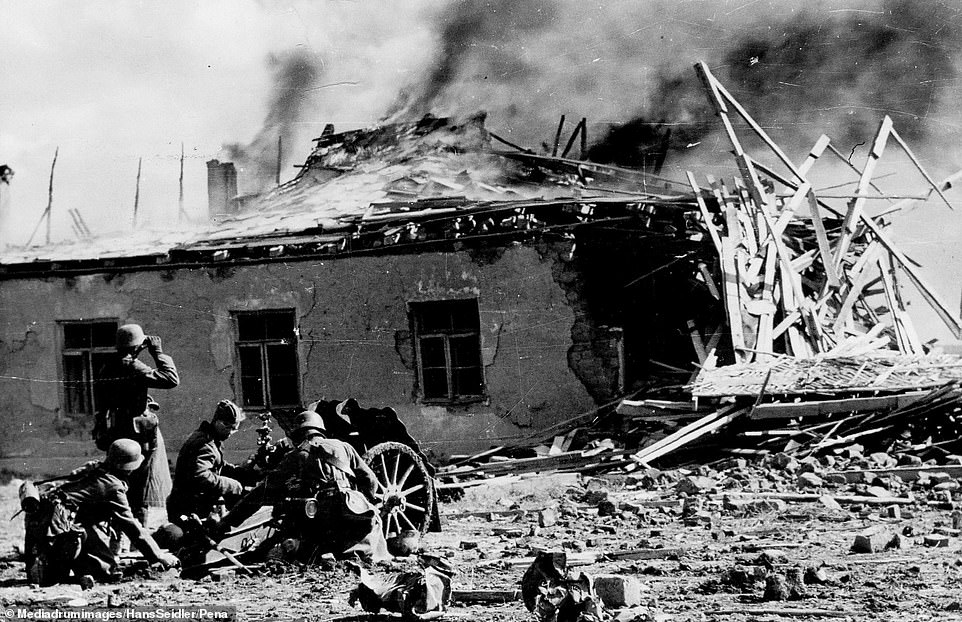 A group of German soldiers attempt to load their weapon as allied forces fire at their position. A partly collapsed and smoking building can be spotted in the background 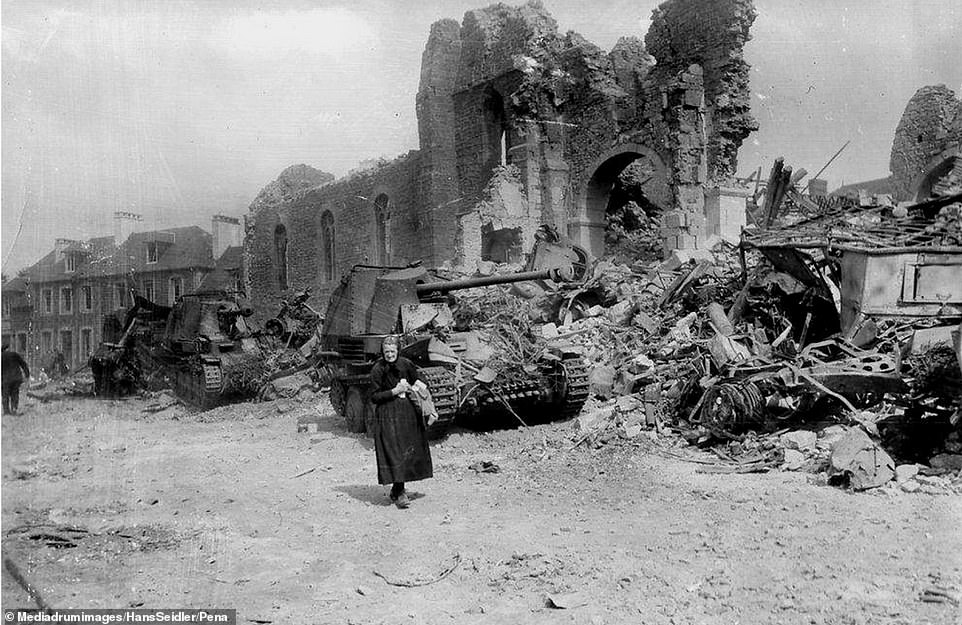 An elderly woman stands in front of a ruined building in a European town battered by aerial attacks, while a German tank has been left destroyed. In the last year of the war, with virtually no Luftwaffe support, German armour succumbed to huge losses. The situation eventually compelled Adolf Hitler’s army to move their armour mainly at night to avoid being attacked 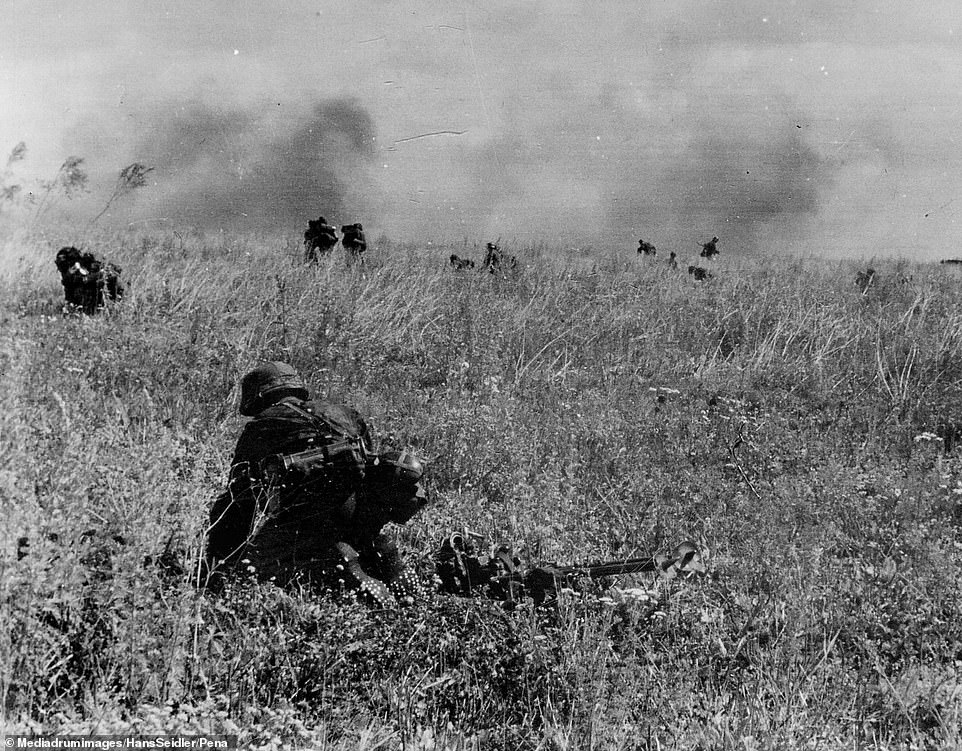 Hitler Youth troops belonging to the infamous 12 SS Panzer Division, which was responsible for a number of war crimes including killing civilians and unarmed prisoners, operate against British forces in a field. The division fought on both the eastern and western fronts 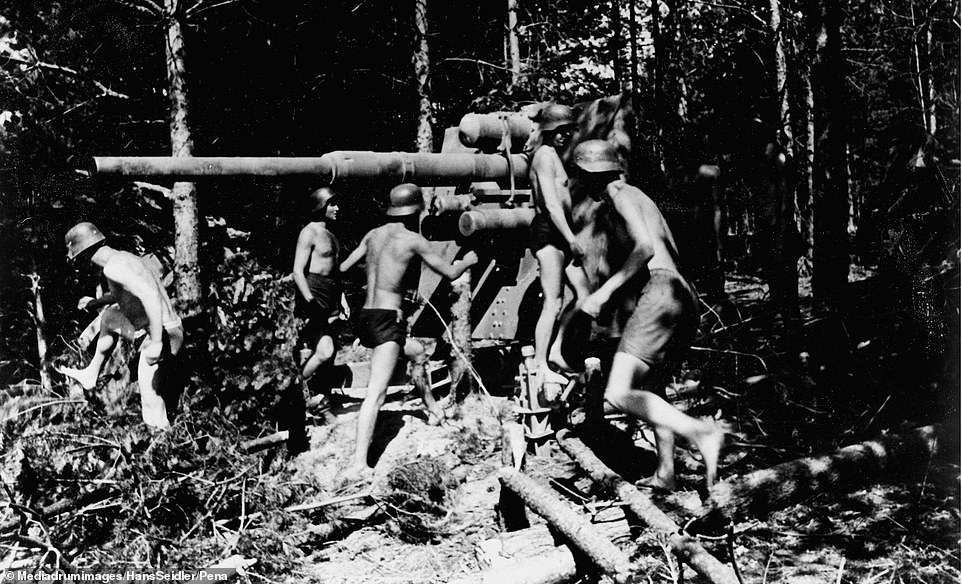 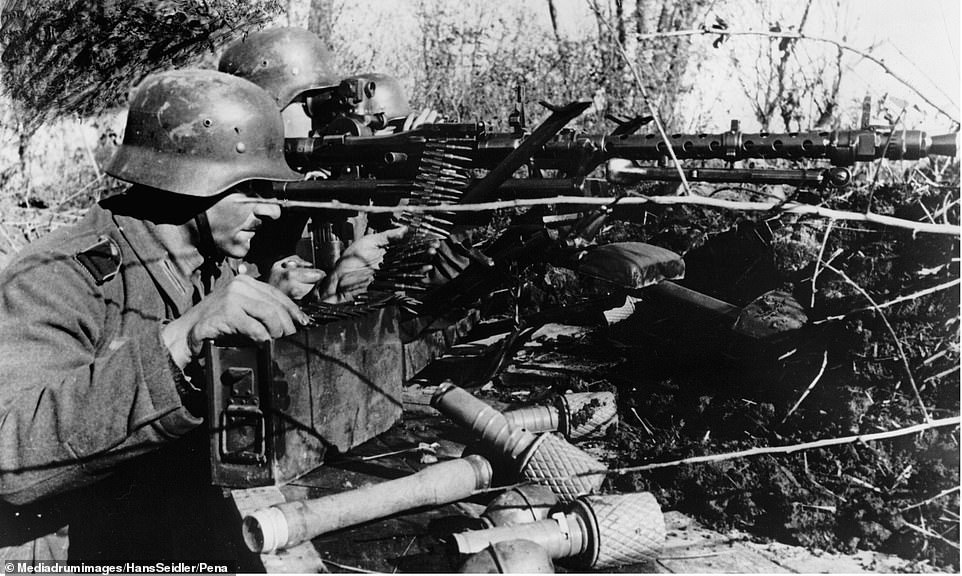 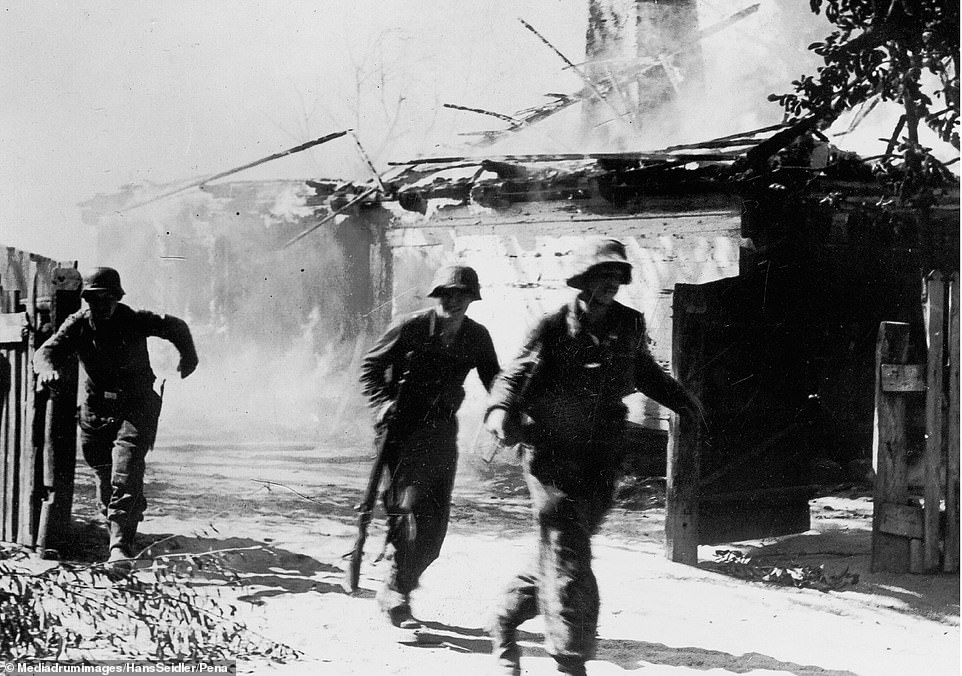 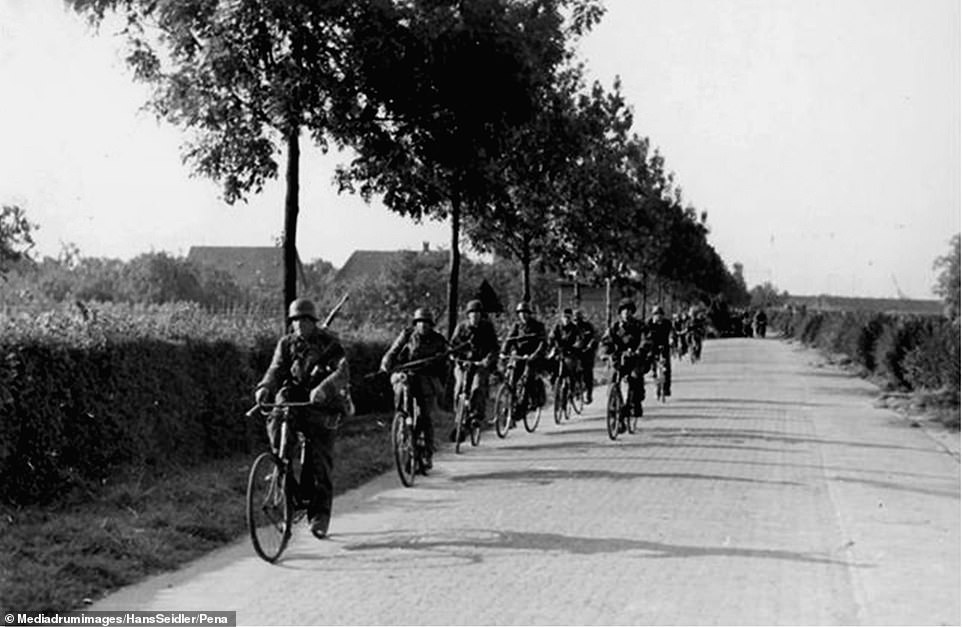 A German reconnaissance platoon travels along a French road during the end of World War Two by bicycle. Next to horses, the use of bicycles was one of the most popular modes of transport for many soldiers