One of NSW’s anti-corruption watchdog commissioners has taken an extraordinary swipe at the Prime Minister Scott Morrison, labelling critics of the agency “buffoons” for ill-informed views.

Stephen Rushton, SC, one of three Independent Commission Against Corruption commissioners, told a NSW parliamentary inquiry on Monday that describing the ICAC as a kangaroo court was offensive, misleading and untrue. 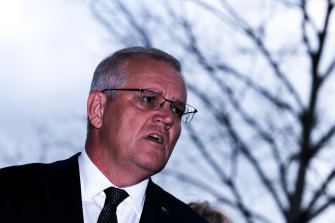 Morrison has repeatedly used the term kangaroo court to describe the ICAC in his opposition to establishing a federal integrity body, which has become an election issue for the May 21 poll.

The Prime Minister has called the ICAC’s inquiry into former premier Gladys Berejiklian as “shameful” and described her treatment as “an absolute disgrace”.

Campaigning in Tasmania last month, Morrison doubled down on his criticism of the ICAC.

“I have lived with that in NSW. I have seen the lives destroyed by a commission such as that which becomes a kangaroo court and goes around and seems to operate through politics and shaming people,” Morrison said.

However, Rushton used his opening statement to the NSW parliament’s ICAC oversight committee to launch a fierce criticism of Morrison’s comments.

“To those buffoons who have repeatedly described this commission as a kangaroo court, I would say three things. First it is deeply offensive to the hardworking staff of the commission. It undermines the institution,” Rushton said.

“Second, there are vast differences between the functions of the commission and a court. Those differences are readily accessible, and there has been much written about those vast differences. To describe us as a kangaroo court is not just misleading, but untrue.”

Rushton, whose term as commissioner expires in the coming months, also warned that such comments risked eroding public trust in governments.

“To make uninformed comments that this commission is a kangaroo court has the real capacity to undermine the commission’s work, and just as importantly, public confidence in public administration,” Rushton said.

The ICAC chief commissioner Peter Hall told the inquiry the agency’s extensive powers were given “on purpose”.

Hall said that an understanding of how the ICAC functioned would reveal to any critic that “he or she is simply wrong”.

“Corruption involves acts performed under conditions of great secrecy, often concealed and there is seldom an eyewitness witness to it,” Hall told the inquiry.

“It requires painstaking investigations to recreate the circumstances that previously existed that led to the suspected corrupt conduct,” he said.

“Occasionally, there is misguided and unfounded criticism of one or more in our community of the commission’s powers and its work.

“Whatever the motive or the purpose behind such criticism may be, a proper understanding of the legal conditions, processes of the oversight safeguards, will reveal to the misguided critic that he or she is simply wrong,” Hall said.