Deion Sanders only has been on the job at Colorado for 18 days.

He’s still learning where to get the best bites to eat in Boulder.

And it wasn’t until Tuesday that Colorado officially announced which assistant coaches would join his new staff at Folsom Field.

But he’s already engineered a stunning reversal of fortunes for Colorado football – at least on paper. There is now data to support this in one key area, which may be the most important of all:

The biggest splash came Wednesday night when cornerback Travis Hunter, the nation’s No. 1 overall recruit in 2022, announced he would transfer to Colorado from Jackson State in Mississippi. He follows several other Jackson State players and coaches to CU after Sanders left his job as Jackson State’s head coach this month to take the same position with the Buffaloes.

“I committed to Coach Prime at Jackson State when he was there, and I want to honor my commitment and stay with him,” Hunter said on his YouTube channel on Wednesday night. “You know what I’m saying? That’s my dawg… He’s going to develop me like he say he was going to develop me. I mean, I felt like I learned a lot with him at Jackson State. So I’m going to stick with him and continue to grind, continue to show love and continue to put the work in so I can get to the next level.”

Hunter’s decision vaulted Colorado to a No. 7 national ranking in the transfer portal rankings, according to 247 Sports as of Wednesday night. That’s a massive turnaround from CU’s last transfer portal class, which ranked 78th nationally after losing many of its top players to other schools, including two top cornerbacks who earned first-team all-conference honors for Pac-12 conference rivals this season – Christian Gonzalez (Oregon) and Mekhi Blackmon (Southern California).

Hunter was the No. 1 transfer prospect available in the portal, according to Rivals.com. He also is the highest ranked recruit to ever sign with or transfer into Colorado and will only be a sophomore in 2023. 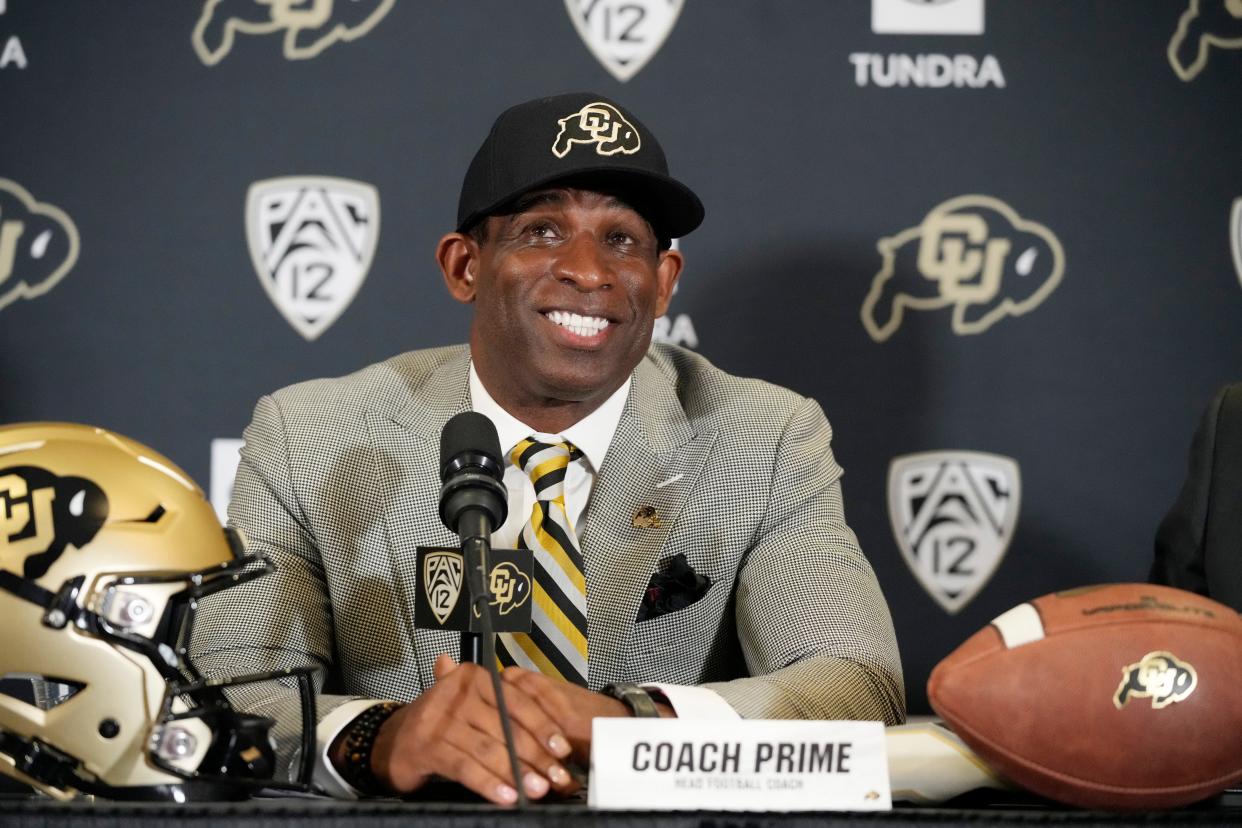 “Based on the 2022 roster (for CU), Travis Hunter is by far the best player on the team right now when he gets there,” Rivals.com national recruiting director Adam Gorney told USA TODAY Sports Wednesday night. “The question, though, is can (Sanders) get more? He needs depth pretty much at every position.”

It is the second time the Pro Football Hall of Famer has convinced Hunter to change teams. Sanders, a former superstar cornerback at Florida State, convinced Hunter to renege on his commitment to his alma mater last year and join him instead at Jackson State, where Hunter missed some games because of injury but still helped Sanders finish with a 12-1 record as a freshman.

At Colorado, he’ll join a program that finished 1-11 last year and has endured losing seasons in 15 of the past 17 years. To upgrade the talent level as fast as possible, Sanders, 55, has turned to the transfer portal, where he also picked up his son, Shedeur, another Jackson State player who has all but been anointed as the Buffaloes’ new starting quarterback.

A total of 24 new players were announced by CU Wednesday, the start of the early signing period. There were 14 high school recruits, two junior college players and eight other transfers, including Hunter, Shedeur Sanders and linebacker LaVonta Bentley from Clemson.

Sanders and his staff drew these recruits from 14 states and the United Kingdom – the most number of states in one class in program history, according to CU. That’s critical for Colorado, which doesn’t have enough in-state talent to rely on otherwise.

“I love where we are,” Sanders said earlier in the day Wednesday in a video posted on Instagram. “Practically everybody that we wanted we’re getting, and we’re still early. So we’ve got a few surprises coming. If I were you, I would stay tuned. I would not turn the channel, because we coming.”

In addition to threatening to run off current CU players who aren’t good enough, he has been aggressive in trying to get top recruits to change their minds after previously committing to join other teams. In one case, he got running back recruit Dylan Edwards to sign with Colorado after he previously committed to Notre Dame. Edwards is ranked as the nation’s No. 3 all-purpose back by Rivals.com.

In another case, Sanders apparently got his foot in the door of Cormani McClain, a cornerback recruit in Florida who is the No. 2 recruit nationally for 2023, behind quarterback Arch Manning, according to 247 Sports’ composite rankings. McClain had committed to Miami (Fla.) but didn’t sign Wednesday after Sanders made a push. It’s unclear what he’ll decide as of Wednesday night.

“Part of it was Deion reaching out and saying, `Hey give me a shot,’” Gorney said. “That is where Deion is going to be very interesting. There is no doubt he will have some blockbuster recruiting wins. Those are nice to have, but you just can’t collect players. You’ve got to build a team. You can have Travis Hunter come to Colorado, but do you have five offensive lineman that can block Oregon and USC and UCLA and Utah?”

He’s working on it. After less than three weeks on the job, CU fans will take what they see so far on paper.