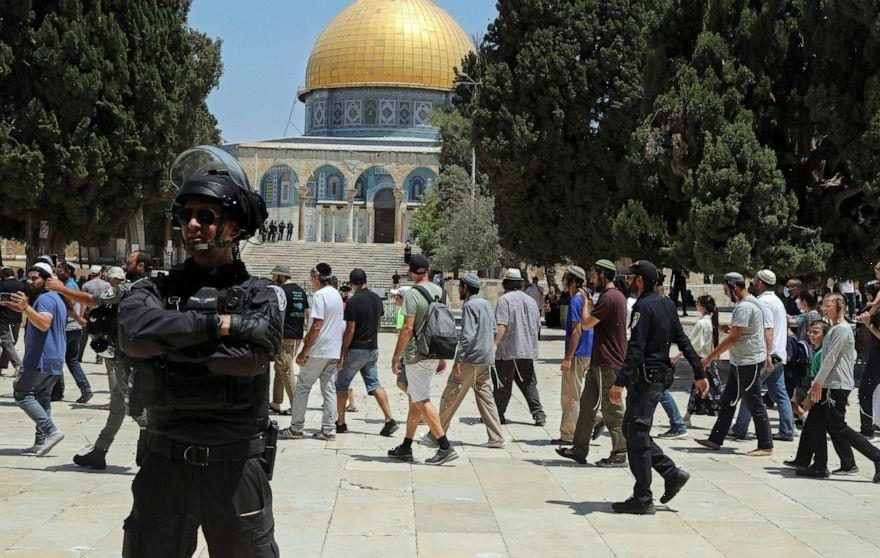 No injuries were reported, but the incident again raised tensions at the hilltop compound revered by Jews and Muslims. Heavy clashes at the site earlier this year helped spark an 11-day war between Israel and Hamas militants in the Gaza Strip.

Jews revere the site as the Temple Mount, where the biblical Temples once stood. It is the holiest site in Judaism. Today, it is home to the Al Aqsa Mosque, the third-holiest site in Islam. Tensions at the compound have frequently spilled over into violence over the years.

The Jews were visiting to mark Tisha B’Av, a day of mourning and repentance when Jews reflect on the destruction of the First and Second Temples, key events in Jewish history.

The Islamic Waqf, which administers the site, said that some 1,500 Jews entered the compound — a number much higher than on typical days. It accused Israeli police of using heavy-handed tactics and said some visitors violated a long-standing status quo agreement barring Jews from praying at the site.

Ahead of the visit, Israeli police said a small group of Muslim youths threw rocks at security forces who quickly secured the area. Amateur video showed police firing what appeared to be rubber bullets, a common crowd-control tactic, and Muslim worshippers were barred from entering the compound for several hours.

In a statement, the Wafq, the Islamic body that administers the site, accused Israel of “violating the sanctity” of the mosque by allowing “Jewish extremists to storm the mosque, make provocative tours and perform public prayers and rituals.”

It said the area “is a purely Islamic mosque that will not accept division or partnership.”

The visit came days before Muslims celebrate the festival of Eid al-Àdha, or Feast of the Sacrifice.

Jordan, which serves as the custodian over Muslim sites in Jerusalem, said it had sent a letter of protest to Israel and urged it to respect the status quo.

“The Israeli actions against the mosque are rejected and condemned,” said Daifallah al-Fayez, spokesman for Jordan’s Foreign Ministry.

Israel’s new prime minister, Naftali Bennett, praised police for their handling of the visit and vowed to protect “freedom of worship” for Jews and Muslims at the site.

His comments raised speculation that Israel might be trying to change the norms of the site to allow Jewish prayer.

But Public Security Minister Omer Bar-Lev told Channel 13 that Israel remains committed to the status quo and that Jewish prayer at the site is “against the law.”