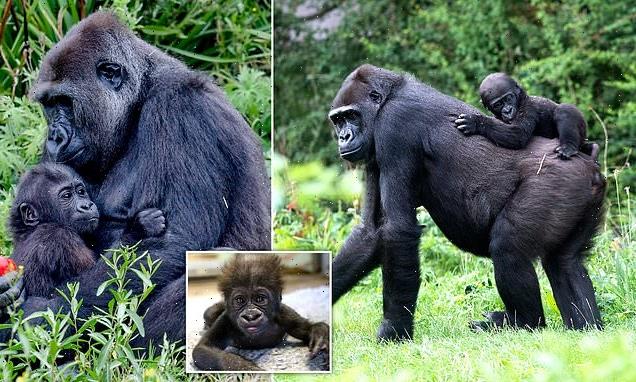 Will you-oo-oo be my mum? How gorilla was rejected at birth and taken in by Bristol zoo keepers… until, magically, another mummy stepped in

Sitting on a grass bank, one-year-old Hasani is happily gnawing some tree bark when his mother Kera stands up and beckons him.

Throwing her right arm behind her, she catches Hasani’s hand and throws him on to her back, before carrying the baby into their home.

It is a maternal scene typical of the gorillas here at Bristol Zoo. Yet their relationship is anything but, because Kera is not Hasani’s biological mother.

The 16-year-old female was chosen by zoo staff to become Hasani’s surrogate mother after his own mother, Kala, was unable to care for him. 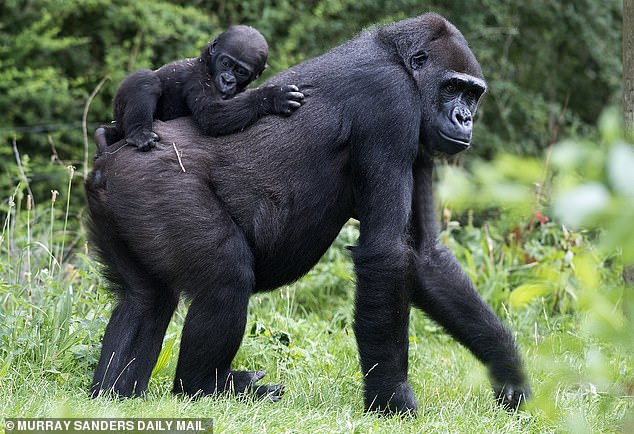 One-year-old Hasani pictured with his surrogate mother Kera, a 16-year-old female, at Bristol Zoo. She was chosen after his biological mother was unable to care for him 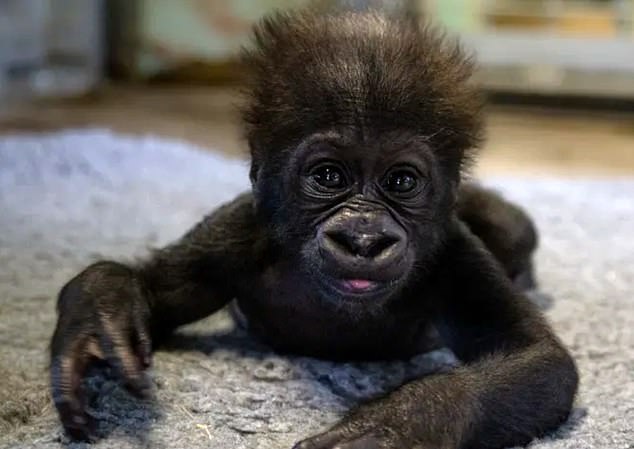 At 20lb and 20in tall, Hasani (pictured above) is now celebrating his first birthday with a cake moulded out of soaked banana-flavoured pellets

Six zoo keepers stepped in to save his life. For half a year, they provided round-the-clock care, bottle-feeding Hasani, playing with him, even sleeping with him in their beds so he could receive the contact that was essential for his development.

They did not entrust Hasani to the embrace of his new surrogate mother until March when they felt he was strong enough to survive.

Kera was chosen on account of her interest in Hasani, perhaps fuelled by her own struggles. Hand-reared herself until the age of four, after her mother had been unable to feed her, Kera, who has been at the zoo since 2008, had become a mother five years earlier. But she’d had to give up her baby to a surrogate after an emergency C-section left her incapable of raising the child.

Her inexperience at motherhood meant putting her in charge was a risk. But it was one that paid off.

Today Hasani celebrates his first birthday with a cake moulded out of soaked banana-flavoured pellets and at 20lb and 20in tall is the ultimate cheeky monkey who fits in effortlessly with the other seven gorillas at the zoo.

Lynsey Bugg, 44, curator of mammals at Bristol Zoo and one of the staff who raised Hasani, says: ‘If we hadn’t hand-reared Hasani, he would have died from lack of food and water. Seeing him play with Kera, I feel a huge sense of pride. And it is bittersweet because it gives Kera the chance of motherhood she never had.’ 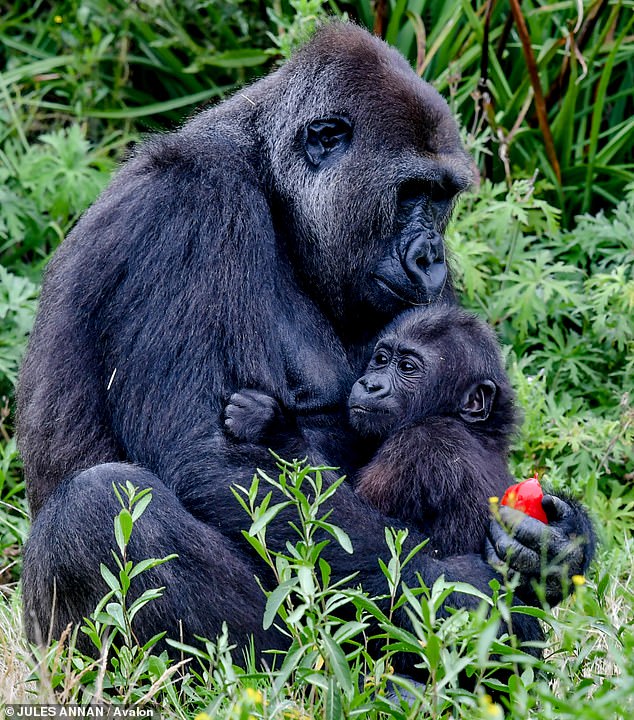 Cutest: Baby Hasani cuddling with beloved surrogate mother Kera at Bristol Zoo. Her inexperience at motherhood meant putting her in charge was a risk. But it was one that paid off 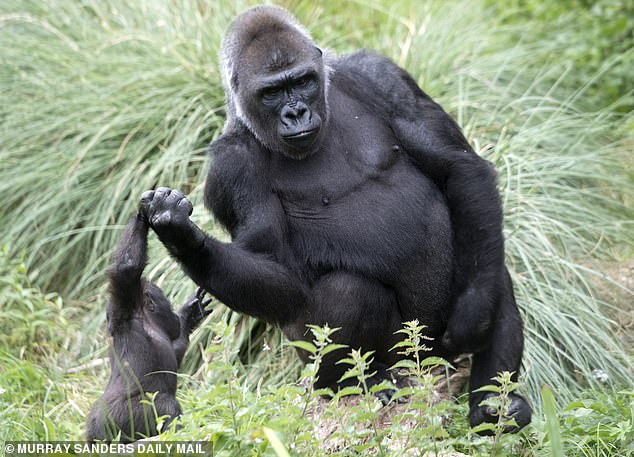 The pair seen playing together. Hasani will be looked after by Kera for three years and slowly become less reliant on her with every passing month

‘He started to look weaker. He became floppy and slept more,’ recalls Lynsey. ‘Instead of sleeping together constantly there’d be times she’d get him off her and walk away. We knew something wasn’t right. It was awful.’

Kala had already endured a rocky time with motherhood. In 2019 she had given birth to a baby through an emergency C-section but the baby had died aged seven days.

After a few weeks the staff realised Kala couldn’t take care of Hasani properly just yet. They therefore took it in turns to work 24-hour shifts looking after the baby, bottle-feeding him baby formula milk every four hours at first.

Bedtime was 7pm. ‘He reminded me of my kids, the way they had a witching hour and go crazy,’ smiles Lynsey, who has two daughters aged ten and 12. 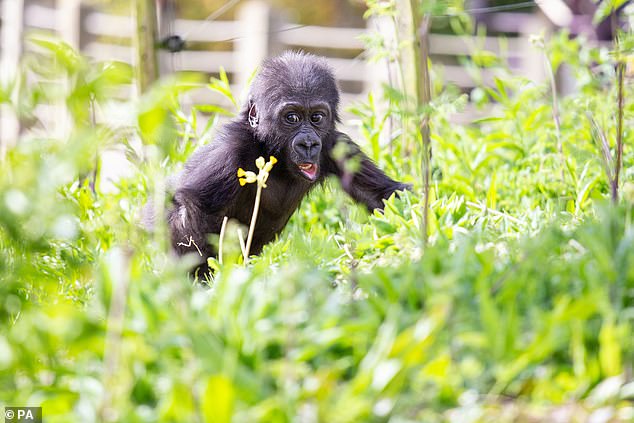 Hasani pictured at Bristol Zoo Gardens in May this year. For half a year, six zoo keepers provided round-the-clock care, bottle-feeding Hasani and playing with him 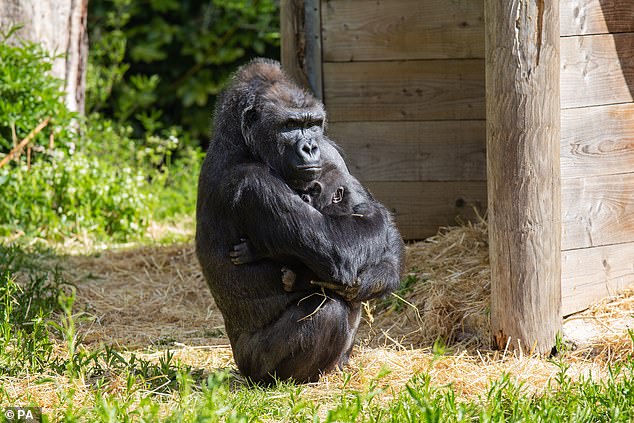 By March Lynsey felt Hasani was ready to be reunited with Kala, who had initially pined for her missing baby. Sadly, the reunion didn’t go according to plan. After the two were put in their own enclosure, Kala did not bond with Hasani as they’d hoped.

After three weeks, the keepers ‘called it quits’ and reverted to Plan B – Kera the surrogate.

The plan was an instant success. ‘It was a massive career high that we’d pulled it off,’ says Lynsey.

Today the bond between the two is clear. Hasani will be looked after by Kera for three years and slowly become less reliant on her with every passing month.

For now, however, she and Hasani snuggle up in their self-built nest together – a mother and son team forged with incredible human help.