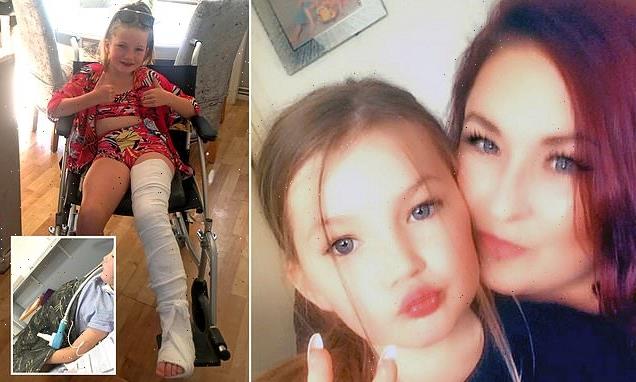 An eight year-old girl had her leg broken and suffered concussion when an e-scooter rider ploughed into her on a footpath going ‘over 20mph’.

Elliemai Smith was sent flying by the scooter before the rider sped off, leaving her crying on the ground. She was rushed to hospital in an ambulance.

Police are hunting the driver and Elliemai’s mother, Kayleigh McColl, 28, has appealed for anyone recognising his description to come forward.

Ms McColl was walking Elliemai and one of her friends home from school in Andover, Hampshire when the struck the eight year-old, leaving her with two broken bones in her leg.

Elliemai had a large bump on her head after the driver knocked her over, her legs were ‘floppy’ and her mother says she was in extreme pain, even seeming to drift in and out of consciousness. 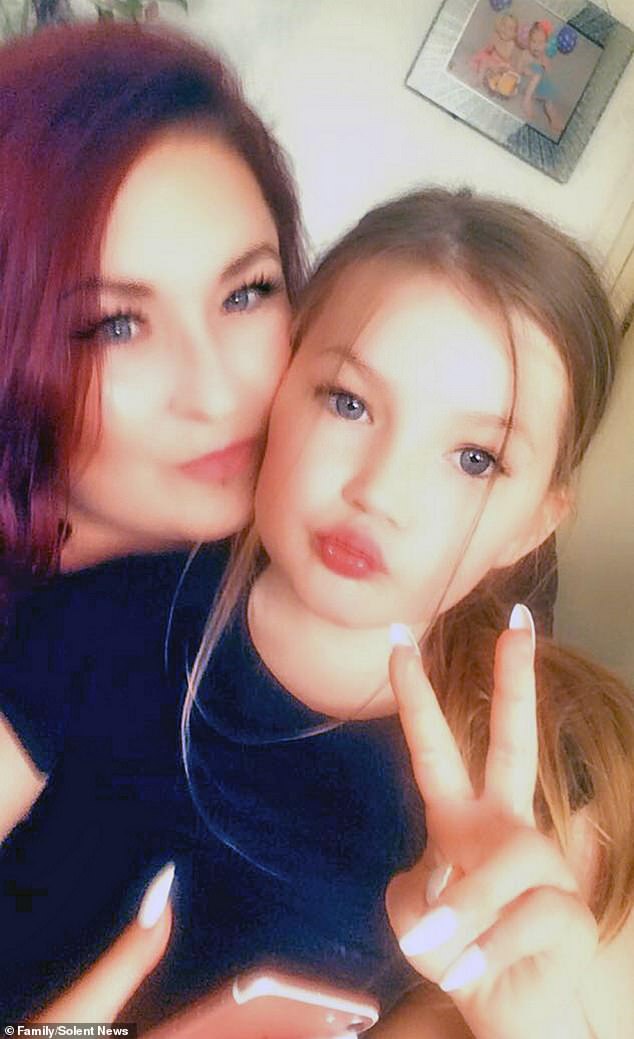 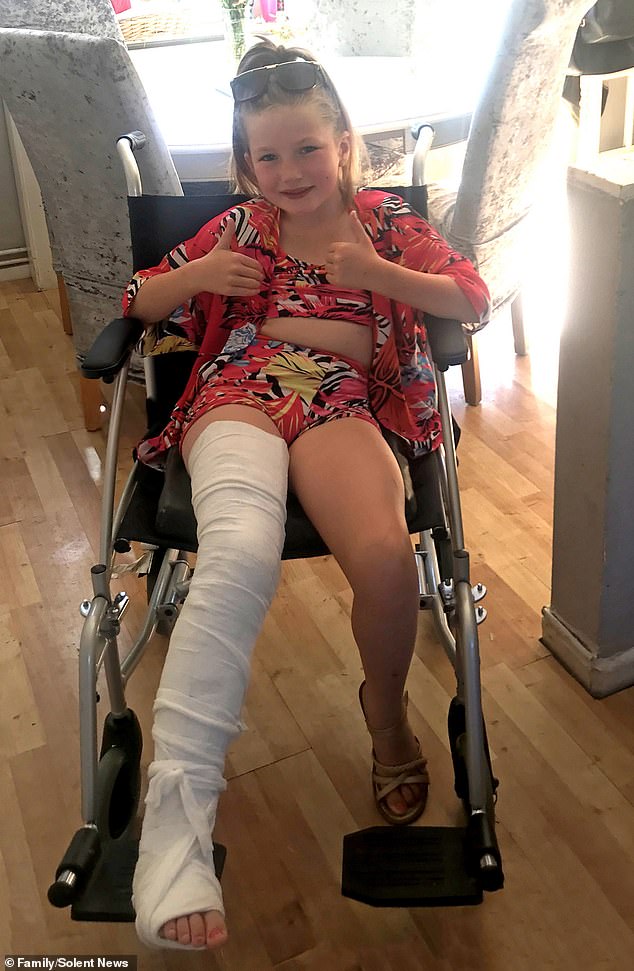 Elliemai’s leg was broken in two places, she suffered concussion and she seemed to drift in and out of consciousness after the crash 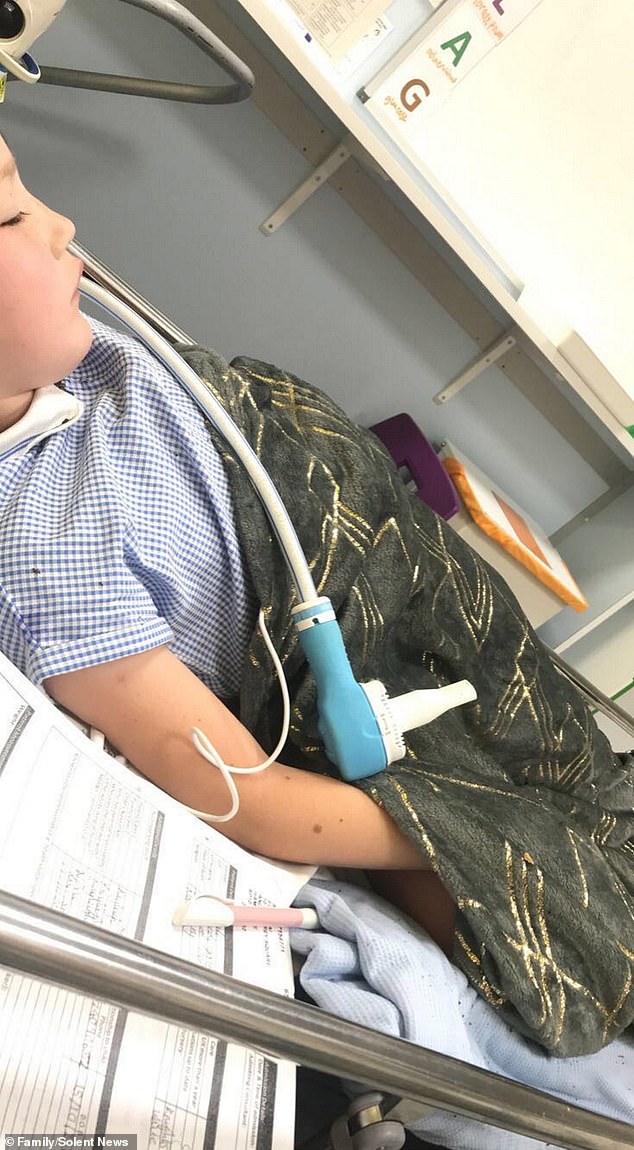 The schoolgirl was rushed to a hospital in Basingstoke, Hampshire, where she was given a temporary cast for her leg

Ms McColl called an ambulance which took them to hospital in nearby Basingstoke, Hampshire.

The eight year-old had fractured both the bones in her lower right leg and she was given temporary cast to allow for swelling before a full cast is made.

Elliemai and her mother were walking from Knights Enham Junior School when the two girls ran ahead.

Ms McColl said: ‘The two girls were running towards an alley, but as she came around the corner this lad came flying up the path and took her off her feet.

Ms McColl described the driver of the e-scooter as being in his early twenties with ginger-ish curly hair.

She said he had driven a large black vehicle ‘well over 20mph’.

The mother of two said the driver at first seemed in shock and apologised, and promised he would come back before he drove off. but he did not return.

‘She’s my baby girl and she could have died. The force at which she hit the ground – if that had been her head it could so easily have been much worse, and it was so easily preventable.’

Describing what she remembers of the incident, Elliemai said: ‘He was so fast, I couldn’t see him coming.

‘I was very scared. It felt really really painful.’

Ms McColl, of Andover, said: ‘I am so angry. I shouldn’t have let him leave but at the time my focus was on my daughter.

‘I think him not staying, and driving off, makes it one hundred times worse.

‘Imagine if that had happened to a child who was walking home on their own?’

She has managed to get use of a wheelchair for Elliemai, and hopes to secure a right-leg elevation one soon.

‘It’s right before the school holidays, and this is going to affect our whole life for the next six to eight weeks,’ she added.

‘Her friend’s will come down to see her, but it completely ruins her summer holiday.

‘She has been so brave, it just breaks my heart. She should be able to run home from school without having to worry.

‘No little girl should go through that.’

It is only legal to ride e-scooters on private land with permission, apart from in certain trial areas where they are allowed on public roads and cycle lanes.

It is illegal to ride them on pavements, footpaths, and in pedestrianised zones.

A spokesperson for Hampshire Constabulary today said: ‘We are investigating a collision which occurred in Andover, involving an e-scooter and a pedestrian.

‘This took place between 3.20pm and 4pm on 7 July, on a footpath between Rimini Road and Smannell Road.

‘The pedestrian, an eight year-old girl, suffered a concussion and a broken leg as a result.

‘The e-scooter rider initially stopped, but left the scene without providing any details and rode off towards King Arthurs Way via the bridge over the A343.

‘Officers have been making enquiries to locate the rider, and we are keen to hear from anyone with information about the incident.

‘We would also urge the rider to make contact with us directly.’

Police described the rider as white, slim, aged in his late teens to early 20s and around 5ft 9ins to 5ft 10ins tall.

He had curly gingery-brown hair shaved on the sides, wiry facial hair and was wearing black jeans and grey trainers.

The e-scooter was black with ‘a chunky board and chunky tyres’.